Michigan's Dylan McCaffrey suffered a concussion in the Wisconsin game on Sept. 21, while Josh Ross suffered a high-ankle sprain.

Ann Arbor — It does not appear Michigan backup quarterback Dylan McCaffrey will be ready to play on Saturday. 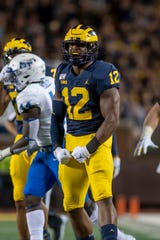 McCaffrey suffered a concussion in the Wisconsin game on Sept. 21 and was held out of last week’s game against Rutgers.

Joe Milton, who had a passing and rushing touchdown against Rutgers, will be the backup to starting quarterback Shea Patterson again on Saturday when Michigan plays Iowa at Michigan Stadium.

Josh Ross suffered a high-ankle sprain in the Wisconsin game, Harbaugh said last Monday on his radio show, and was in a boot on the sideline for the Rutgers game. 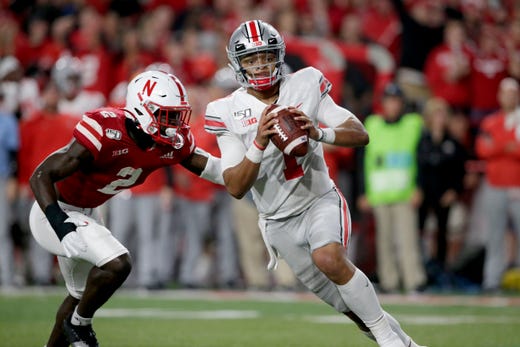 1. Ohio State (5-0, 2-0) – The Buckeyes just keep rolling over every team on their schedule. The primetime matchup at Nebraska was supposed to be a test. Instead, it was simply another week of domination as quarterback Justin Fields threw for three touchdowns and ran for another while the defense held Nebraska to just 47 yards passing. The next “test” for Ohio State comes next week as Michigan State travels to Columbus. Last week: 1. Nati Harnik, AP
Fullscreen 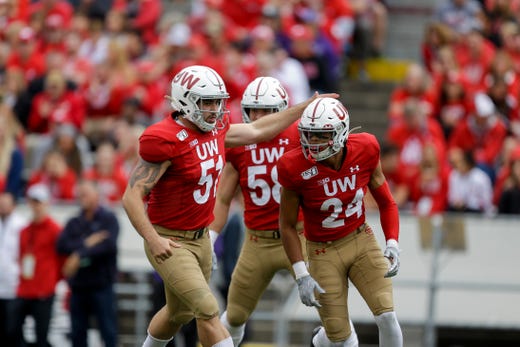 2. Wisconsin (4-0, 2-0) – The Badgers didn’t dominate like they did a week ago against Michigan, but getting past Northwestern was all that mattered by the end of the game. Jonathan Taylor ran for more than 100 yards for the ninth straight game but the offense struggled as the Badgers leaned on their defense. Wisconsin finishes off non-conference play next week with Kent State before hosting Michigan State. Last week: 2. Andy Manis, AP
Fullscreen

3. Penn State (4-0, 1-0) – The Nittany Lions gave Maryland a bit of a reality check in a Friday night matchup, rolling over the Terrapins in a shutout as the defense continues to play well. Quarterback Sean Clifford was impressive once again, throwing for 398 yards and three touchdowns while running for another score. The Nittany Lions host a struggling Purdue team next week before a three-game stretch that includes Iowa, Michigan and Michigan State. Last week: 3. Nick Wass, AP
Fullscreen 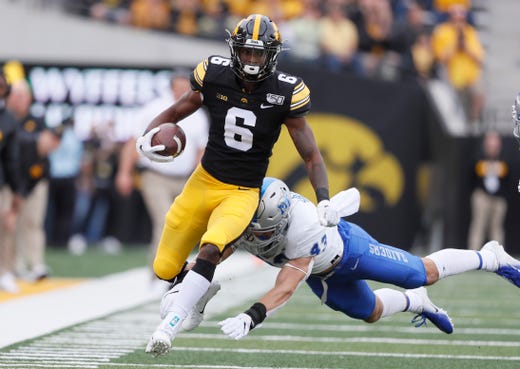 4. Iowa (4-0, 1-0) – The Hawkeyes wrapped up non-conference play by beating up on Middle Tennessee State behind an offense that gained 644 yards to complement one of the top defenses in the Big Ten. Things get tough from here as the Hawkeyes look to prove they belong among the contenders with a trip next week to Michigan followed by a home game with Penn State, two brutal crossover games. Last week: 4. Charlie Neibergall, AP
Fullscreen

5. Michigan State (4-1, 2-0) – The Spartans actually leaned on their offense to remain unbeaten in the Big Ten as the defense struggled to contain Indiana. As the Hoosiers were having success moving the ball, the MSU offense brought the Spartans from behind in the fourth quarter, eventually winning the game in the final seconds thanks to the play of quarterback Brian Lewerke and receiver Darrell Stewart. The gauntlet begins now as MSU hits the road the next two weeks to take on Ohio State and Wisconsin, followed by a home game against Penn State. Last week: 5. Max Ortiz, Detroit News
Fullscreen 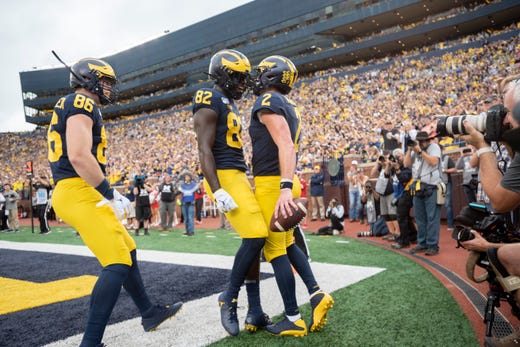 6. Michigan (3-1, 1-1) – Rutgers proved to be the perfect elixir for a struggling Wolverines offense as quarterback Shea Patterson accounted for four touchdowns as Michigan faced little resistance in the shutout win. The critical question is how much of the result was the Wolverines’ improvement and how much was Rutgers’ ineptitude? Next week’s home game with Iowa should give a better indication of where the Wolverines stand. Last week: 6. David Guralnick, Detroit News
Fullscreen

7. Minnesota (4-0, 1-0) – Tanner Morgan had a huge game for the Golden Gophers, who picked up a big road win in the Big Ten West. Morgan threw for 396 yards and four touchdowns, both career highs, as he completed his first 14 passes. Each of the Gophers’ four victories have come by seven points or less, which is a concern, but the schedule is favorable enough that the Gophers could rattle off a few in a row and remain the division hunt. Last week: 8. Michael Conroy, AP
Fullscreen 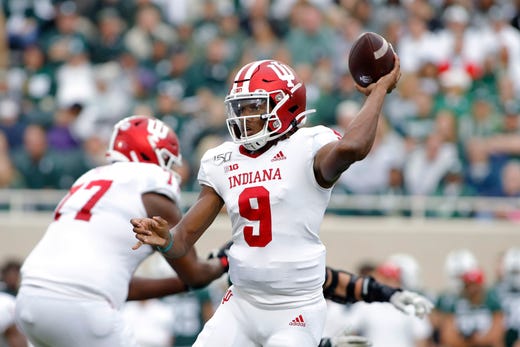 8. Indiana (3-2, 0-2) – The Hoosiers lost at Michigan State but played well enough to win. That might not make them feel much better without a conference win, but the return of quarterback Michael Penix should continue to provide a lift after he threw for 286 yards and three touchdowns against the Spartans. Next week is a bye before getting a visit from Rutgers, a game that should allow the Hoosiers to begin to build some momentum. Last week: 10. Al Goldis, AP
Fullscreen 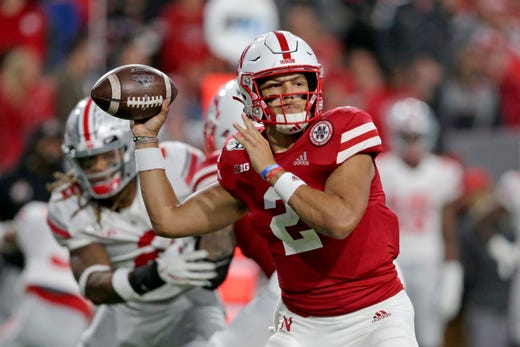 9. Nebraska (3-2, 1-1) – The buzz was at a fever pitch on Saturday night as the Cornhuskers hosted Ohio State, but it wasn’t long before the home team provided a giant dud. Nothing went right for Scott Frost’s team as the only score came in garbage time with Adrian Martinez being held to just 47 yards passing and three interceptions. A struggling Northwestern team visits Lincoln next week as the Huskers look to rebound. Last week: 7. Nati Harnik, AP
Fullscreen 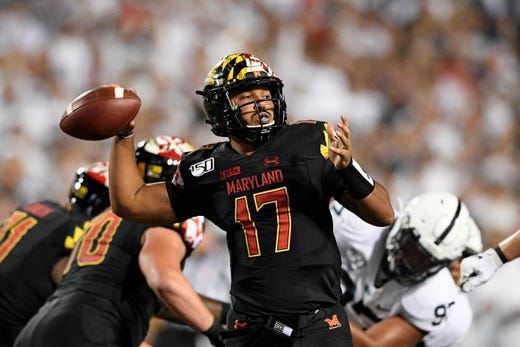 10. Maryland (2-2, 0-1) – The torrid start for the Terrapins’ offense is a distant memory after getting shut out at home by Penn State on Friday night. That came after a lackluster loss at Temple and has some wondering where the season is heading. The Terps head to Rutgers next week in a prime chance to rebound, something that will be vital if they expect to keep the season from spiraling out of control. Last week: 9. Nick Wass, AP
Fullscreen 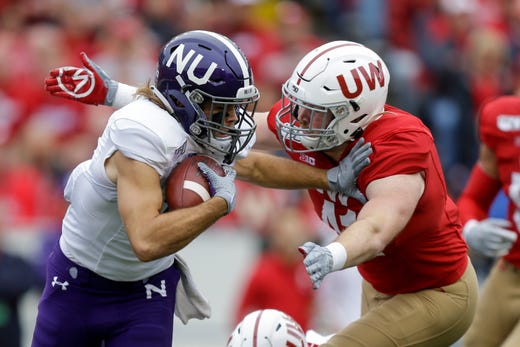 11. Northwestern (1-3, 0-2) – The Wildcats are a far cry from the team that won the West last season, having lost three of their first four games this season. There was a little more fight in the loss at Wisconsin, but the offensive woes are continuing for the Wildcats, who head to Nebraska next week before getting Ohio State and Iowa in back-to-back weeks. Last week: 12. Andy Manis, AP
Fullscreen 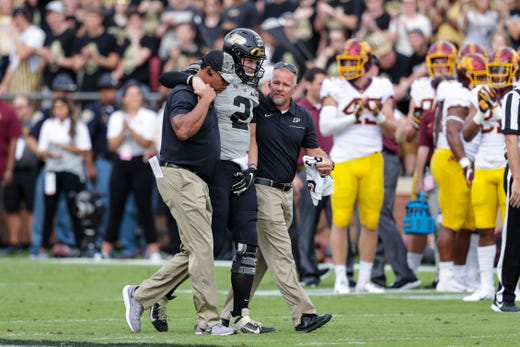 12. Purdue (1-3, 0-1) – The losses are piling up, and that’s bad enough for the Boilermakers. But losing quarterback Elijah Sindelar and wide receiver Rondale Moore on the same play in the home loss to Minnesota could lead to much bigger problems. It appears to be a deep hole for the Boilermakers to climb out of as they head to Penn State next week, a tough place to try and rebound while shorthanded. Last week: 11. Michael Conroy, AP
Fullscreen 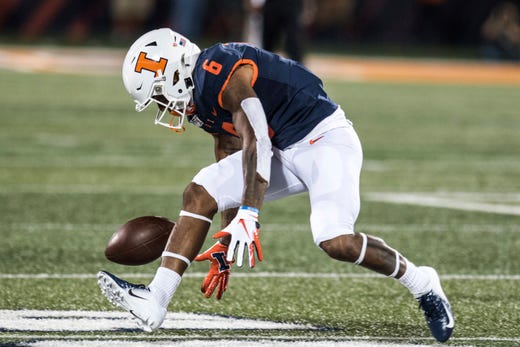 13. Illinois (2-2, 0-1) – The Fighting Illini had the week off after the tough home loss to Nebraska last week. Getting back on track will have to come next week with a trip to Minnesota against an improving Gophers team while home games with Michigan and Wisconsin are next as the Illini try and claw their way out of the West basement. Last week: 13. Holly Hart, AP
Fullscreen

14. Rutgers (1-3, 0-2) – There’s really nothing good happening for the Scarlet Knights, who got blown out at Michigan and have been outscored 82-0 in their two Big Ten games. The schedule for the next five games is far from daunting, but there are no signs that Rutgers has what it takes to win one game at this point, let alone piece a few together to try and salvage something from this season. Last week: 14. David Guralnick, Detroit News
Fullscreen

Tight end Sean McKeon missed the Rutgers game after suffering an injury on a touchdown reception late in the Wisconsin game, and Harbaugh said his rehab his coming along faster than originally expected, however he didn’t offer a timeline on his return.

In Ross’ absence, Cam McGrone got the start at middle linebacker.

“I think Kwity Paye, if you had to single out one person on the defense to give a game ball to, it would be Kwity Paye,” Harbaugh said. “If there was an honorable mention category or a second game ball that would be given out, it would be Cam McGrone. He took another step in everything, physical play, eye discipline, tackling, pressure on the quarterback, blitz patterns were really good, speed keeps showing up.”

Harbaugh said Patterson and receiver Nico Collins were limited in practice last week, but had very good production against Rutgers. Patterson had X-rays after the Wisconsin game that were negative, but he and McCaffrey took several hard hits. Collins struggled with strep throat, Harbaugh said, and missed a few days of practice. Donovan Peoples-Jones is inching closer and closer to being 100 percent healthy.

“I thought Shea Patterson had a great game,” Harbaugh said. “Threw the ball effectively, seeing the field great, dynamic out of the pocket, scoring touchdowns. He was a little bit limited during the week. Didn’t show any signs of that when he played in the game. Great game for him.”

Running back Tru Wilson also returned after breaking his right hand during the season opener.

“Other than the little padding I had in my hand, I felt pretty good,” Wilson said Monday. “Just held the ball in my left hand as much as I could.”

He said he didn’t miss any practices after the injury. When asked about whether he was experiencing discomfort playing with the broken hand in the Rutgers game, Wilson shrugged.