'It gives you chills': Wolverines out to make their own memories in Notre Dame rivalry

They see Michigan graduate assistant Roy Roundtree every day in the building. But they also see the photo that captures his biggest moment as a Wolverine every day, as well.

'It gives you chills': Wolverines out to make their own memories in Notre Dame rivalry

Ann Arbor — They see Michigan graduate assistant Roy Roundtree every day in the building. But they also see the photo that captures his biggest moment as a Wolverine every day, as well.

In the Towsley Museum in Schembechler Hall, there are a few reminders of that first night game at Michigan Stadium in 2011, a remarkable come-from-behind victory as the Wolverines defeated Notre Dame, 35-31, in the final seconds. 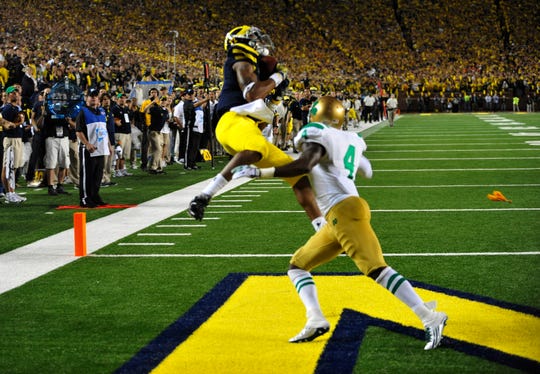 As the two programs prepare for Saturday night’s game at Michigan Stadium, the last meeting for the foreseeable future, there are so many highlights from games played between these rivals, but Roundtree’s touchdown catch to lift the Wolverines has a special spot.

The Irish held a 24-7 lead in the fourth quarter in 2011 when Michigan quarterback Denard Robinson took over and led the Wolverines as they scored 21 unanswered points to take a 28-24 lead late in the game. Notre Dame regained the lead with 30 seconds left when Tommy Rees hit Theo Riddick for a 29-yard touchdown. But Robinson wasn’t done. Michigan went 80 yards in three plays and Roundtree made his only catch of the game, as Robinson found him in the right side of the end zone for a game-winning 16-yard touchdown with two seconds left.

More: View from the other side: Notre Dame at Michigan

“When you walk up the tunnel into the locker room from the field, that’s kinda the first thing you see when you walk in,” left tackle Jon Runyan said, referring to a photo of Roundtree making that game-winning catch. “It’s an iconic moment in Michigan history and in the Michigan-Notre Dame rivalry. There’s a lot of people that watch this game. It gives you chills when you think about it.”

Ed Warinner is in his second season as Michigan’s offensive line coach, but he was on the Notre Dame sideline that game and treasures the memory of the 2011 finish even though he was on the losing side.

“It was something to walk into the Big House,” Warinner said. "I think there were 115,000 people in the stadium. Night game. And a hell of a game. I get to work side-by-side now for two years with the guy who caught the pass on the last play to win the game. And I get to see his picture doing it in the locker room.

“I remember being in that locker room across the hallway there, in the tunnel, and how we all felt after that. But that was something. That was one of the great college football games of all time. Both teams played their heart out and it came down to the last play and the home team won, and I know the guy who caught the pass.” 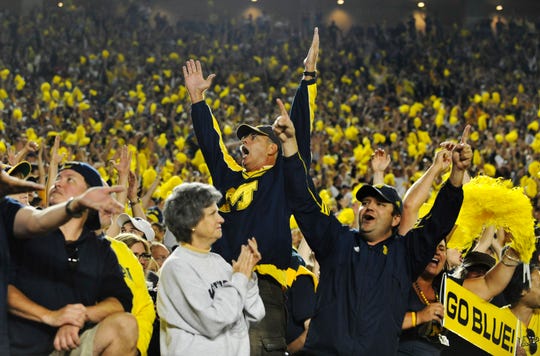 Warinner enjoys working with Roundtree, who helps coach the receivers, and recently saw the highlight of the Robinson-to-Roundtree game-winner while scrolling through Twitter.

“And just the same feeling came over me,” Warinner said, smiling. “Just the angst that you have when it happens.

“But then, because I’m a part of Michigan culture now, and work with Roy, I was just like, ‘Man, what a great play.’ For the rest of his life, he’s a hero.”

The two teams met again at night at Michigan Stadium in 2013 with Michigan winning, 41-30.

Michigan and Notre Dame played 13 straight through 2014 then took a three-season break before resuming in 2018. The team’s opened last season with Notre Dame winning in South Bend, 24-17. The programs have not, for now, renewed the series after this game but Michigan coach Jim Harbaugh said this week there are conversations to revive it and he’s in favor of future matchups between the two.

Notre Dame currently is ranked No. 8 and is 5-1, with its only loss at Georgia, 23-17 on Sept. 21. Ironically, that’s the day Michigan suffered its first loss, 35-14 at Wisconsin. The Wolverines are 5-2 and ranked No. 19 after losing at Penn State last Saturday.

The older current Michigan players were about 12 years old when Roundtree made that game-winning catch. Receiver Nico Collins said that sometimes Roundtree will talk about the play they see on the wall heading into the locker room.

“That was back in his day,” Collins said smiling. “It was a big-time play by him. He said that atmosphere was crazy, and he caught the game-winning touchdown. That’s something he going to talk about the rest of (his) life. I’ll talk about it, too.”

Collins often envisions himself making plays like that one.

“You gotta picture that every game, no matter who it is,” Collins said. “This game, I do picture myself making a big play. You’ve got to picture it. You’ve got to visualize yourself out there making plays for the team.”

Runyan joked about how young Roundtree looked eight years ago. He watched that wild fourth quarter on television.

“That’s really one of (my) first memories of a Michigan-Notre Dame game,” Runyan said.

It is unusual for the teams to meet this late in the season after it traditionally was the season opener or second game of the season. The players said it doesn’t matter to them that the game against the Irish is in the middle of the Big Ten schedule.

For Michigan, the Notre Dame rivalry was long considered a “measuring stick” game at the start of the season. Coaches got their first glimpse of their team and learned very quickly what it did well and what needed work.

Defensive tackle Carlo Kemp said this week that even after a second loss that effectively removed the Wolverines from the Big Ten championship race, there’s still plenty to play for, starting with Notre Dame. They also have their rivalry games against Michigan State and unbeaten Ohio State in these final five games, both at Michigan Stadium.

“One of the things I think that’s really cool is this game isn’t on the schedule for a little bit, so there’s a chance to make a name for yourself, a name for this team, a name for the offense, a name for the defense. They can talk about what happened in this Michigan-Notre Dame game in 2019.”

And maybe see a photo from that game hanging on the locker room wall.