Michigan defense shuts down 'just about everything' from Notre Dame

Notre Dame entered the game ranked No. 30 nationally in totally offense, averaging 451 yards and was 13th in scoring, averaging 39.2 points. Against Michigan, the Irish gained only 180 yards, including 47 yards rushing.

Michigan defense shuts down 'just about everything' from Notre Dame

Michigan coach Jim Harbaugh respects the fight and resilience his team has had this season. The Detroit News

Ann Arbor — Michigan’s defense wanted to make a point from the start.

Notre Dame won the toss and started the game on offense. A roughing the kicker penalty on Michigan allowed the Irish a free first down, but the Irish could do very little.

That was pretty much the case the whole game, as the Wolverines upset the Irish, 45-14, Saturday night at Michigan Stadium. Notre Dame entered the game ranked No. 30 nationally in totally offense, averaging 451 yards and was 13th in scoring, averaging 39.2 points. 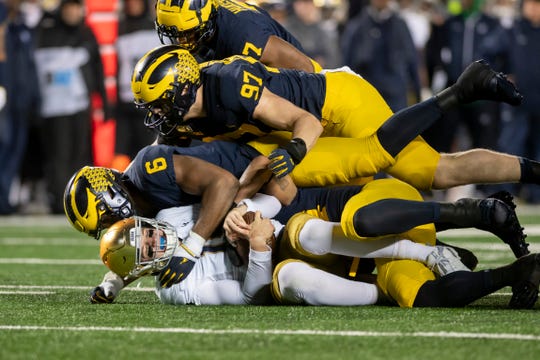 Against Michigan, the Irish gained only 180 yards, including 47 yards rushing.

“The defense saw it as disrespect that they took the ball first and trying to make something happen,” said middle linebacker Cam McGrone, who finished with a game-best 12 tackles. “From the start, we had to show them we’re out here to play and that they can’t get anything on us.”

Michigan led 17-0 at halftime and Notre Dame had 52 total yards.

“We wanted to start fast as a defense,” safety Josh Metellus said. “We just pride ourselves on limiting the team to under 17 points — we feel like we can win every game if we do that. Once we got going in the first half, we went by a one-play-at-a-time mentality. Win every play and at the end of the game we’re going to end up winning.

“That’s what I felt like we was doing. We was keeping a calm head, not getting too hyped. Not trying to be Superman and everybody trying to make the play. Everybody was doing their job, and that’s when I feel we were executing at our best.”

“We’re just so fast,” Harbaugh said. “We’re running so good and the knockback in the defensive line was outstanding. (Defensive coordinator) Don Brown called a great game. He really had it wired. Can’t say enough about that. They were shutting down just about everything that was being thrown at them.” 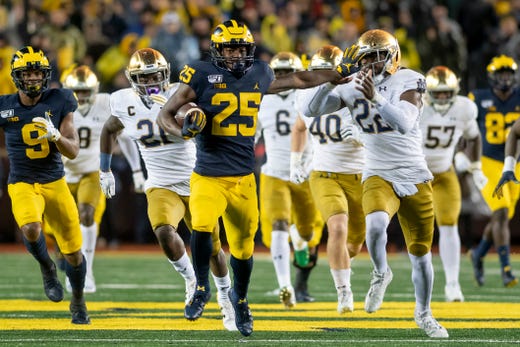 Michigan running back Hassan Haskins pushes away Notre Dame linebacker Asmar Bilal during a run for extra yards in the third quarter of a 45-14 win for the Wolverines at Michigan Stadium, October 26, 2019. Haskins had 149 rushing yards for the game. David Guralnick, Detroit News
Fullscreen

Michigan running back Hassan Haskins leaps over Notre Dame linebacker Jeremiah Owusu-Koramoah during a run in the second quarter of a game between the University of Michigan and Notre Dame, at Michigan Stadium, in Ann Arbor, October 26, 2019. David Guralnick, Detroit News
Fullscreen 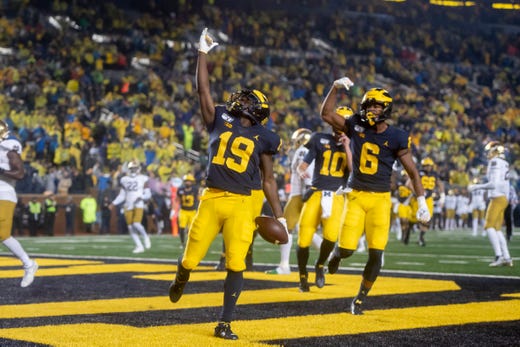 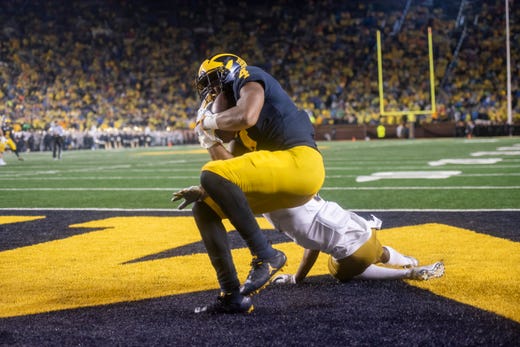 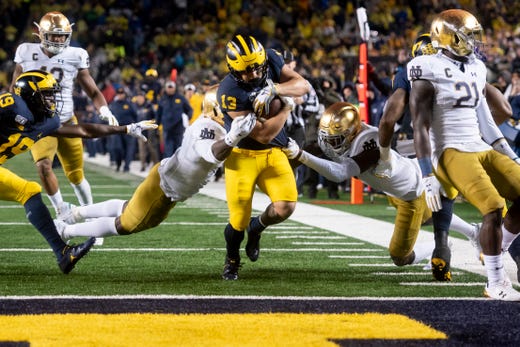 Michigan running back Tru Wilson pushes his way into the end zone for a touchdown during a run in the fourth quarter. David Guralnick, Detroit News
Fullscreen 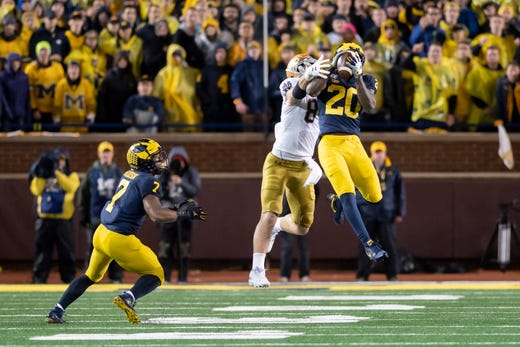 This interception by Michigan defensive back Brad Hawkins on a pass intended for Notre Dame tight end Cole Kmet was called back due to an interference call on linebacker Khaleke Hudson, left. David Guralnick, Detroit News
Fullscreen 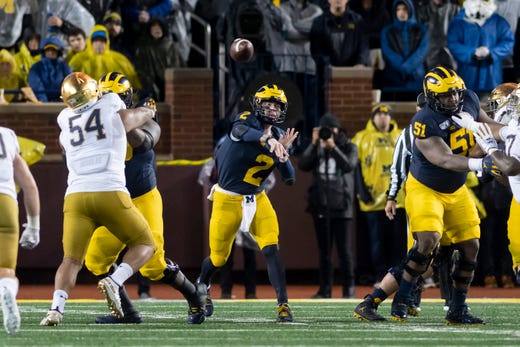 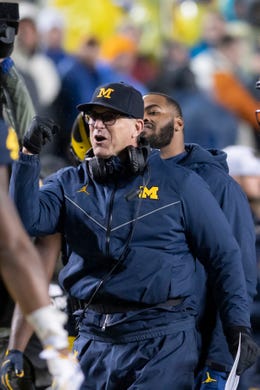 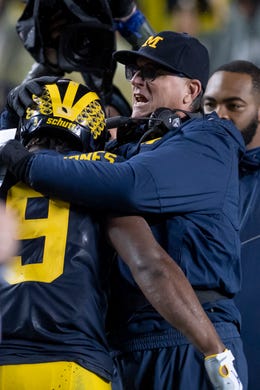 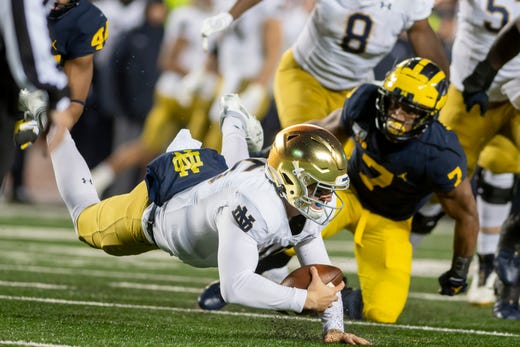 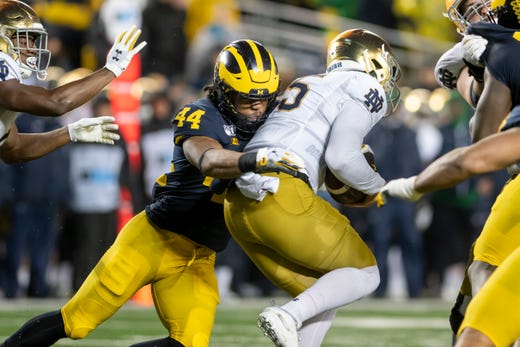 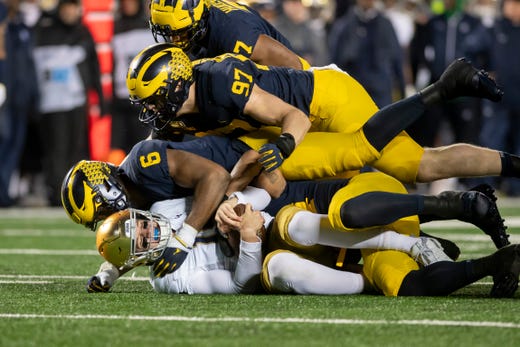 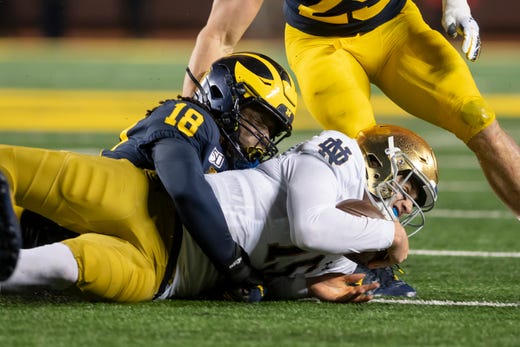 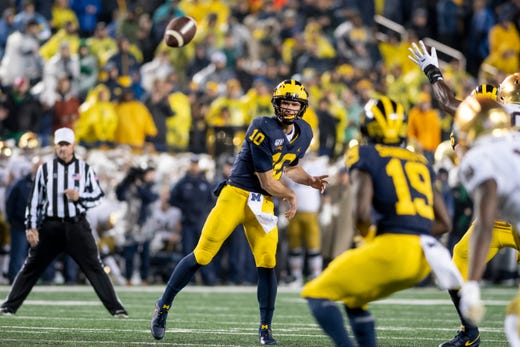 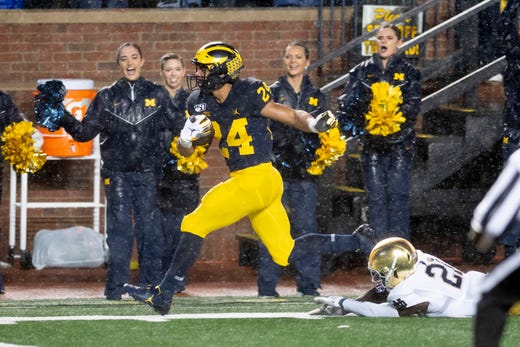 Michigan running back Zach Charbonnet is tripped up by Notre Dame safety Jalen Elliott just outside of the end zone in the first quarter. David Guralnick, Detroit News
Fullscreen 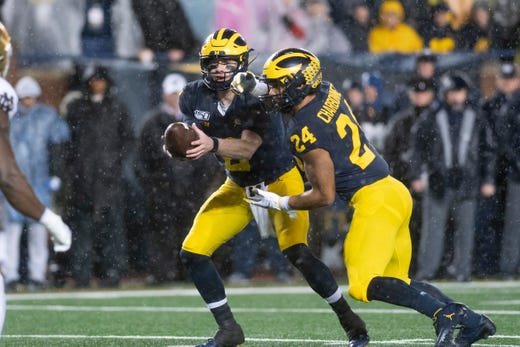 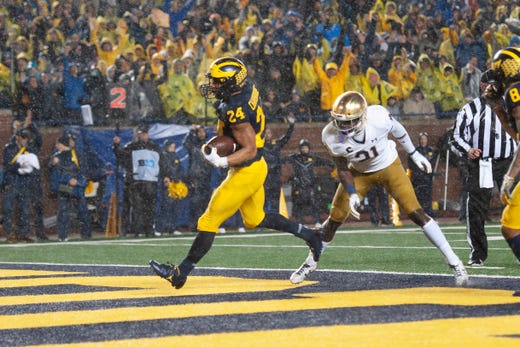 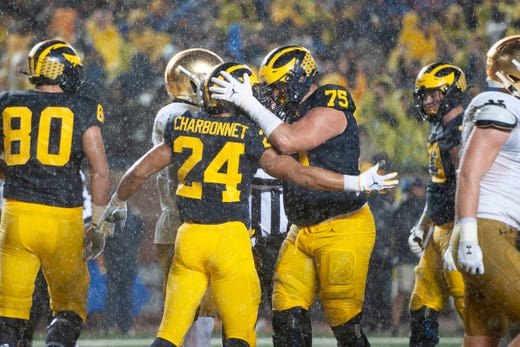 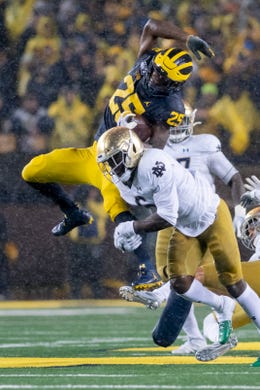 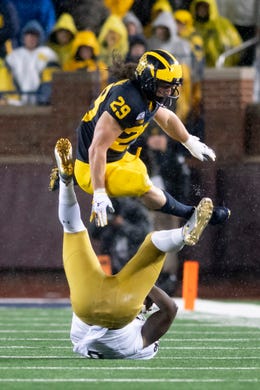 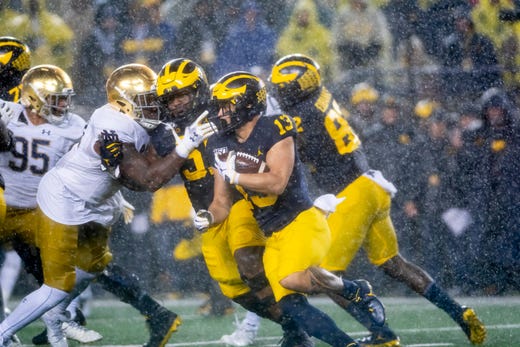 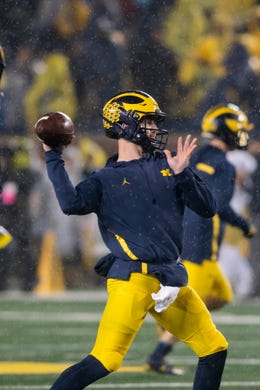 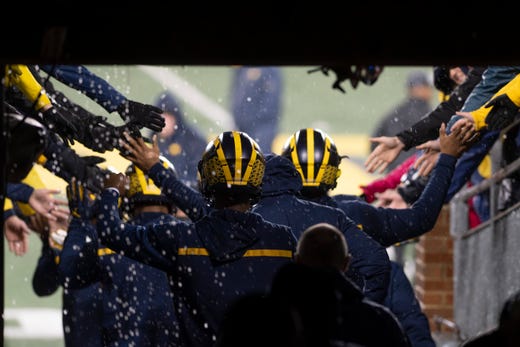 Michigan players make their way out of the tunnel and into the rain for warmups. David Guralnick, Detroit News
Fullscreen 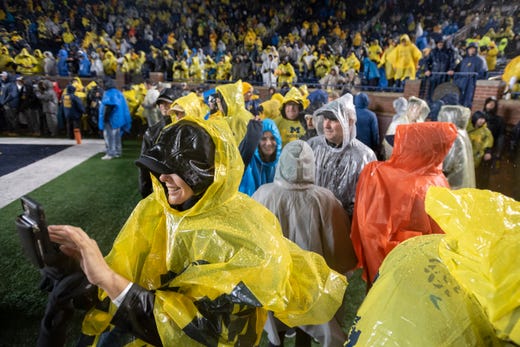 Metellus said they knew the Irish were going to deviate much from what they’ve been doing offensively this season.

“The type of offense that they run, they’re trying to stick to the same type of script, get the same guys the ball,” Metellus said. “They don’t like going outside the frame in the type of stuff they like to do in their scheme. And we knew coming in they watched teams previously and see what worked against us and tried to hit that. We’ve been practicing all week, all season, pretty much the plays we know that can beat us.

“We came out and executed, we got after the quarterback. We knew once we hit him a couple times he was going to get jumpy in the pocket and not want to throw the ball downfield, so I feel like our D line did a good job pressuring him.”

Michigan has been difficult to run against since the loss at Wisconsin when the Badgers rushed for 359 yards. Since then, the Wolverines have held four of five teams under 65 rushing yards. Penn State last week had 101 yards rushing.

“I knew what this defense is capable of,” Metellus said. “I feel like we capable of shutting anybody out. If we execute at the right time, and everybody is locked in, doing their job, we can shut anybody out in the country. We start slow, once we pick it up, it’s hard to stop us. Once we started fast in that first quarter and we didn’t give up any first-quarter points, I knew the defense was going to be able to hold on the rest of the game.”