Johnson wrote on Twitter he was diagnosed with "coarctation of my aorta" and didn't meet the standard to continue playing a contact sport. 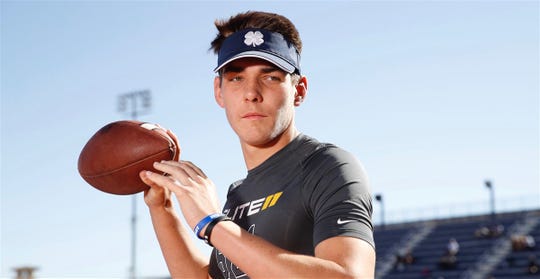 Michigan 2020 quarterback commit JD Johnson has retired from the game because of a medical condition diagnosed when he was 12.

Johnson, who is from Phoenix, made the announcement Wednesday on Twitter. He said Michigan coach Jim Harbaugh will honor his scholarship and offered him a position on the staff.

He wrote he was diagnosed with “coarctation of my aorta” and after this season he required an adjustment to the stent that had been put in initially. After going through additional tests, Johnson wrote doctors discovered issues that can’t be corrected with surgery.

“I was told that I did not meet the clearance standard to continue playing a contact sport for fear that my aorta could rupture, or that not enough blood would get to my brain causing an on field stroke,” Johnson wrote.