The Big Ten hockey season gets underway this weekend and Michigan plays a series at No. 13 Ohio State. 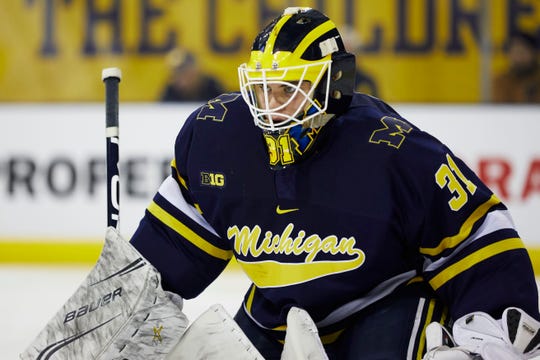 Ann Arbor – The Big Ten hockey season gets underway this weekend and Michigan plays a series at No. 13 Ohio State, the defending league regular-season champion.

The Wolverines will then host Minnesota Nov. 8-9 before playing a home-and-home series with Michigan State – Thursday, Nov. 14 at Yost with the return game at Munn in East Lansing Nov. 16.

Michigan third-year head coach Mel Pearson has been pleased with his defense, especially sophomore goaltender Strauss Mann, who turned aside all 36 shots he faced in a 4-0 win over Western Michigan last Friday at Yost Arena, also blanking Lake Superior State 4-0 the previous weekend.

More: Frozen Four might be more than just a dream for Michigan hockey team

“Our goaltending has been really solid – that was an issue coming into the year – and so far this year Strauss Mann has been really, really good,” Pearson said.

“It’s been our offense, and I didn’t think that would be an issue, but it has sort of flip-flopped where our offense hasn’t been as good and our defense has been a lot better.”

Michigan is averaging 2.5 goals per game.

“Beecher and York are elite talents, they are everything as advertised,” Pearson said. “They have been really good, so I can’t say enough about those two guys.”

Senior Will Lockwood (Vancouver) and junior Jack Becker (Boston) each have a team-high three goals for the Wolverines.