Ann Arbor — Former Michigan linebacker Devin Bush is now enjoying his rookie season with the Pittsburgh Steelers, but he seems to be around everywhere this week, etched forever in the Michigan-Michigan State rivalry.

Promos for Saturday’s in-state rivalry game flash on television and there’s Bush digging his cleats again and again into the Spartan logo at midfield at Spartan Stadium. Fans zing each other on social media using a photo of Bush staring down helmeted MSU players, their arms locked arm in arm as they marched the length of the field during a pre-game ritual that turned into a bit of a scuffle. 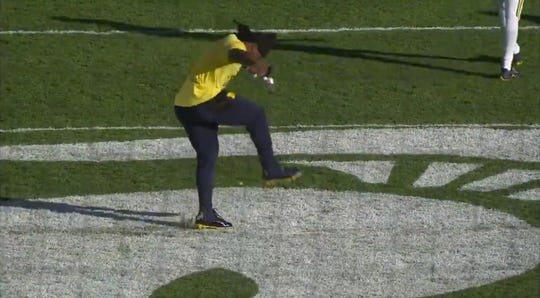 A few days later, the Big Ten would issue a $10,000 fine to Michigan State for violating the Big Ten sportsmanship policy “and initiated contact with multiple members of Michigan’s team who were legitimately on the field during pregame warmups.”

Eisen jokingly pushed Bush and asked if that’s all he remembered, nudging him toward recalling the logo incident.

“I had a lot of green and white on the bottom of my cleats that day,” Bush said, while, laughing, on the Eisen show. “Things got really chippy out there, man. Somebody’s logo got messed up. I don’t know who did it. It was almost a brawl. I didn’t know what was going on.”

Michigan captain and left guard Ben Bredeson referred to the Michigan State game as an “outlier” and said anything can happen in “big rivalry games.”

“These rivalry games you’ve got to take a step back and focus on yourselves,” Bredeson said. “Yeah, there were some extracurriculars that happened before the game last year. I don’t know if that’s going to happen again, I don’t think it will. That’s not something we’re focused on.”

The team veterans advise the younger players to maintain their cool in a game like this.

“This is one of those games you circle on the calendar,” Bredeson said. “Everybody’s already ready to go for it. I just try to always tell the young guys, keep your composure, keep your head. We’ve seen these games, they can get very heated, very emotional. We just don’t want any dumb penalties, no mistakes.

"Try to control the controllables in big games like this, especially when the in-state rival comes in. You always want to be your best.”

Khaleke Hudson, a captain this year, was on the field when the Spartans emerged before the game last season. Michigan said Michigan State was late taking the field and some Wolverines were out stretching and warming up when the two groups clashed. Hudson joked about his time as a freshman playing in the Michigan State game, trash-talking when he had the chance but added he was on the kick teams so that talk didn’t play much of a role.

Last year, however, was different.

“It was pretty hyped up,” Hudson said this week. “Dev (Bush) got us going when he came back in the locker room, gave us a good speech about what just happened and how we’re about to go out there and handle our business. That was probably the most intense thing I’ve been a part of.”

Bush rallied his teammates, although most did not know what exactly had transpired on the field before the game.

More: Healthy, 'locked in' Shea Patterson has Michigan offense up and running

“He was saying, ‘It’s time to go. They don’t respect us,’ and telling everybody what happened and how we’ve got to go out there and not give them a chance,” Hudson said. “Put our foot on their throats early from start to finish and come out with the victory.”

Defensive tackle Carlo Kemp, also a captain this year, said most of the Wolverines were unaware of what had transpired with Bush.

The days of potential pregame issues like the one between Michigan and Michigan State last year likely are over, however, thanks to a new Big Ten rule.

“That’s been addressed pretty thoroughly,” Harbaugh said Monday. “There’s a rule that two hours before a game, players cannot be on the field. If there are any pre-game traditions, then those take place before the two-hour mark when both teams at two hours are allowed to be on the field and share the field.

"One team cannot supercede that. It’s been addressed.”