Creighton coach Greg McDermott said his team didn’t have an answer for Simpson around the basket, particularly in the second half. 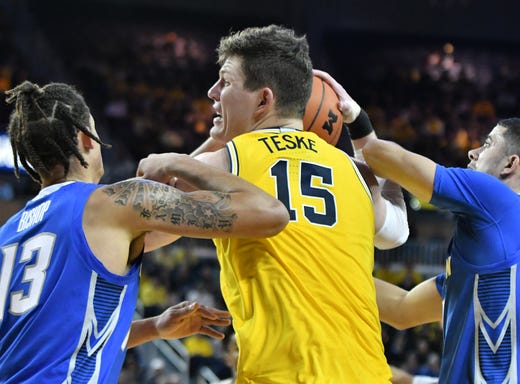 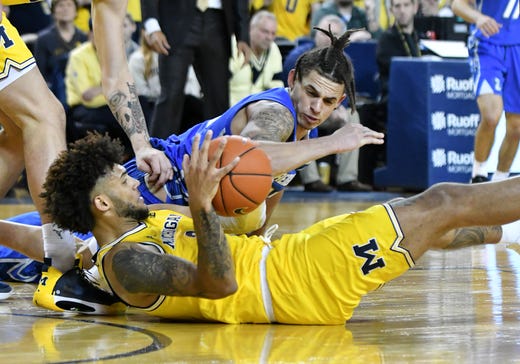 Michigan forward Isaiah Livers tries to pass the ball away from Creighton forward Christian Bishop, top, for the ball in the second half. Robin Buckson, Detroit News
Fullscreen 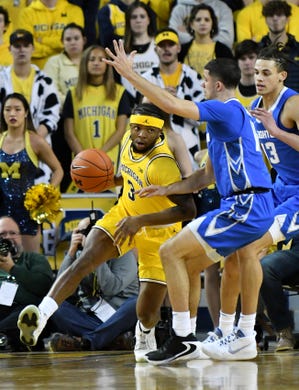 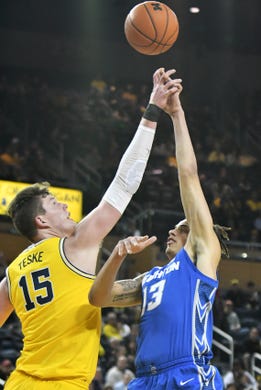 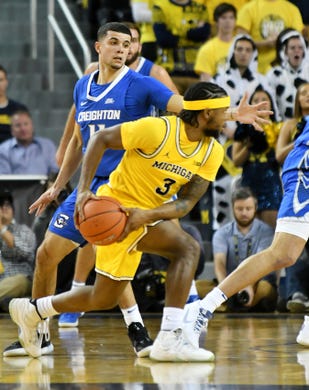 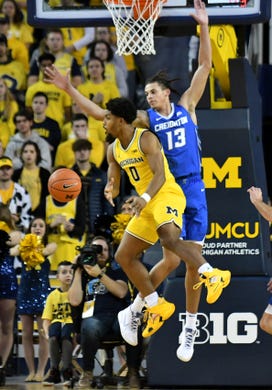 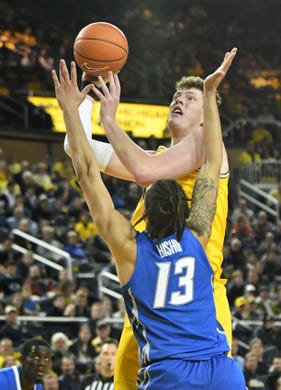 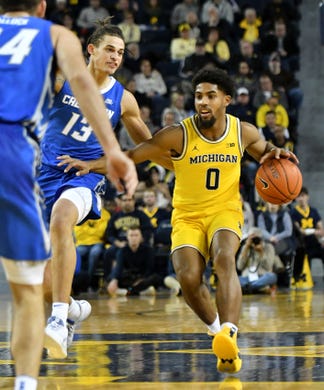 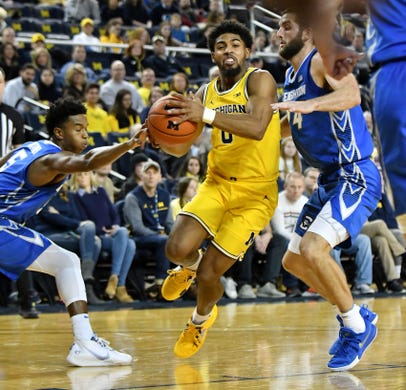 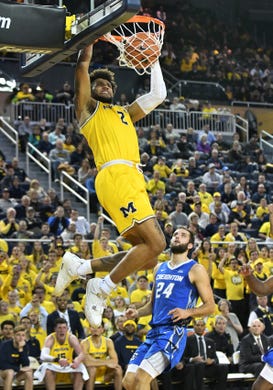 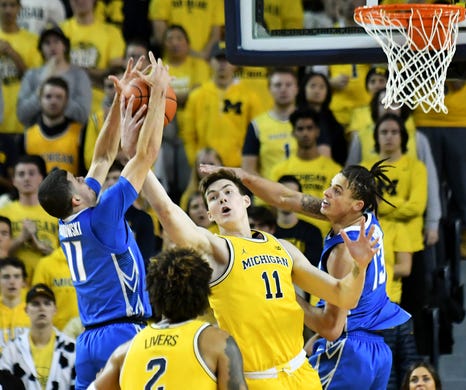 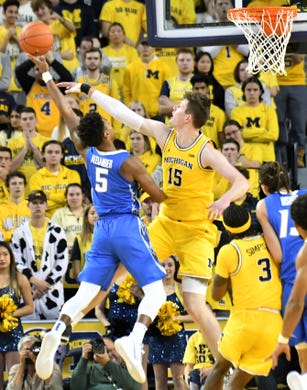 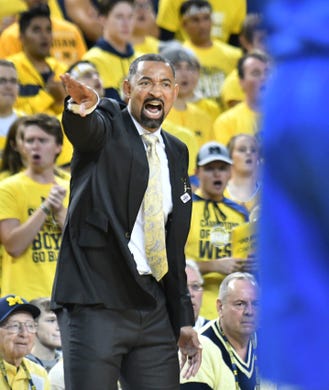 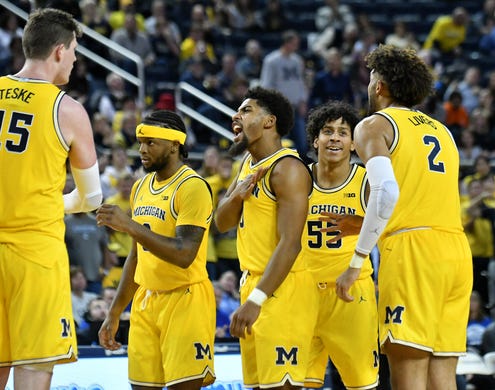 From left, Michigan's Jon Teske, Zavier Simpson, David DeJulius, Eli Brooks and Isaiah Livers react with a lead at a time out \ in the second half. Robin Buckson, Detroit News
Fullscreen 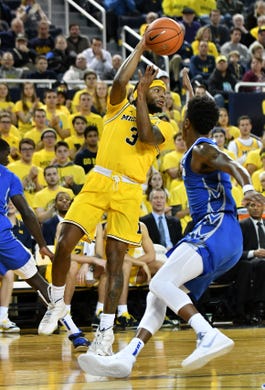 Michigan forward Isaiah Livers (2) looks to the referee for the call on this battle for the ball with Creighton center Kelvin Jones (43) in the second half. Robin Buckson, Detroit News
Fullscreen

Michigan forward Isaiah Livers (2) helps up Creighton center Kelvin Jones (43) after they were on the court going after the ball in the second half. Robin Buckson, Detroit News
Fullscreen 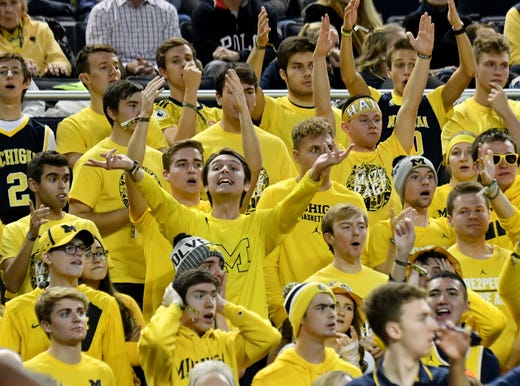 Fans react to a call in the second half. Robin Buckson, Detroit News
Fullscreen 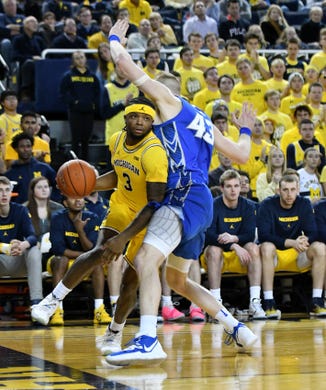 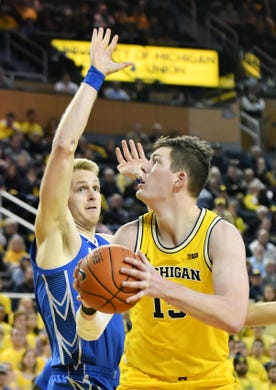 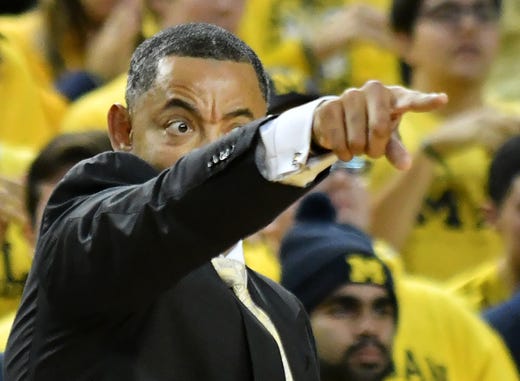 Michigan guard Zavier Simpson (3) communicates while bringing the ball up court in the second half. Robin Buckson, Detroit News
Fullscreen

Michigan made the necessary halftime adjustments that led to an improved second-half performance in Tuesday’s 79-69 victory at Crisler Center.

“Not being able to keep Simpson out the paint ended up being our downfall,” Creighton coach Greg McDermott said. “He gets into the paint, he's got room to make decisions, he's going to pick people apart and that's what he did.”

During the first half where Michigan was firing away from 3-point range, Simpson knifed his way through Creighton’s defense off ball screens and set up his teammates for open looks from deep. He assisted on three of Michigan’s seven 3-pointers and six of the team’s 15 made field goals in the opening 20 minutes.

But after halftime, Simpson was even more of a nuisance in ball screens. He made four field goals — all on driving layups — and found senior center Jon Teske for a pair of easy baskets in the final six minutes as the Wolverines kept the Bluejays at arm’s length.

Simply put, McDermott said his team didn’t have an answer for Simpson around the basket, particularly in the second half. 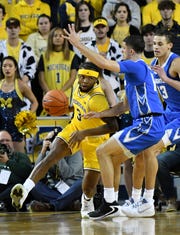 "Simpson is hard to control. He is who he is for a reason,” McDermott said. “I think he makes great decisions with the basketball and got us stretched out some. Our bigs didn't do a good enough job of stopping the basketball and when we did, he made the right read with either a skip pass or found Teske under the basket.

“Our aggressiveness probably wasn't where it needed to be in the second half, and we started a freshman on him in Shereef Mitchell. That's a lot to ask of a freshman to guard someone as talented as Zavier is."

Simpson finished his efficient performance by having a hand in 16 of Michigan’s 30 made baskets. He racked up 17 points while shooting 7-for-11 from the field (2-for-3 on 3-pointers) and dishing out nine assists.

It was also a bounce-back outing for Simpson, who tied his career high with six turnovers in the regular-season opener against Appalachian State. According to Teske, Simpson “seemed more comfortable” on the court running the team’s new offensive system.

"He wanted to come out and attack and use those ball screens to get downhill,” Teske said. “He's one of the best passers in the nation. …He's very creative off the ball screen."

Michigan coach Juwan Howard credited Simpson’s patience for his effectiveness in ball-screen situations before noting the Wolverines’ big men can still do a better job of screening to free him up.

Teske added some of the sets the team runs — from screen-and-rolls to pick-and-rolls— makes it difficult for defenses to stop Simpson from getting into the paint. And Creighton’s lack of length — the Bluejays played only one guy taller than 6-foot-7 — made matters more challenging.

“We put the opponent in tough situations where it's hard to guard the ball screen,” Teske said. “He's very quick. He's got to change direction to get through the little spaces and he’s able to guy to find guys open for 3s and dunks.”

While McDermott saw enough of that on Tuesday, he won’t have to worry about game planning for Simpson again anytime soon.

"I mean, it's hard because he has such great pace to his game,” McDermott said. “He throws a one-hand hook pass left-handed or right-handed, so it's difficult to keep him under control. It's one thing to try to prepare for him on film, but it's another thing when you see it in person.”