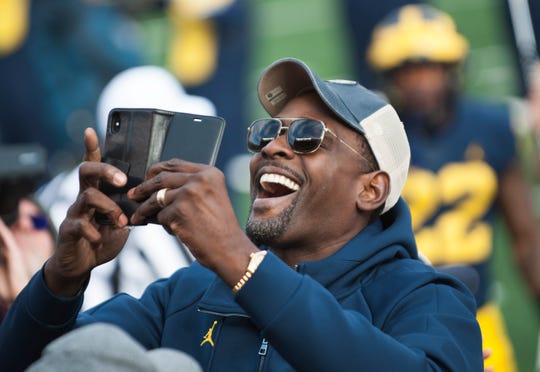 Michigan coach Juwan Howard has received no shortage of support from his former Fab Five teammates.

Ray Jackson has reached out via calls and text messages. Jimmy King was on hand for the team’s exhibition and regular-season opener. Jalen Rose made a surprise appearance for his official coaching debut against Appalachian State.

And it appears Chris Webber plans to make his long-awaited return to Crisler Center this season to cheer on Howard in person.

“It's so fun watching him live his dream, evolve as a coach and do such a great job,” Webber said on “The Rich Eisen Show” on Thursday. “I'll definitely be there to support my boy very soon.”

When asked if there was a certain date or game he had in mind for his Ann Arbor visit, Webber said he didn’t.

“I'm definitely going to support (Howard), and I think he even understands that I may have to come support us beating Ohio State first in football and then continue right over there to him,” Webber said. “But it's fun watching him and also letting him establish the culture there and do his thing.”

#Michigan basketball is off to a 2-0 start under new coach @JuwanHoward and that's much to the delight of @realchriswebber: pic.twitter.com/6hcHEo7qn3

However, the Michigan football and basketball schedules don’t align to where both teams are playing at home around that time.

The football team will host Ohio State at Michigan Stadium in the regular-season finale on Nov. 30. The basketball team will be in the Bahamas for the Battle 4 Atlantis tournament on Nov. 27-29 before traveling to Louisville for the ACC-Big Ten Challenge on Dec. 3.

Last season, Webber accepted Michigan football coach Jim Harbaugh’s invitation to be an honorary captain for the Penn State game last November. The night before that game, the basketball team played an exhibition at home and former basketball coach John Beilein had hoped to link up with Webber, but a meeting never took place.

Still, Webber’s return last year was viewed as a step toward him mending his relationship with the university after his ties to former booster Ed Martin and a payment scandal led to 10-year disassociation ban, which ended in 2013.

“I really believe this is about the long run. It's not about any shortsightedness of me hurrying up to do this and that,” Webber said. “I really want him (Howard) to establish what he has there, get comfortable and get his guys going like they want to. Hopefully I can just come in and have some fun and watch them. I can't tell you how much I'm looking forward to it.”

Whenever that time comes, Howard made it clear the door is always open for Webber and the rest of their Fab Five teammates.

“All those guys are my family,” Howard said last month at Big Ten media day. “They are welcome to visit practices, visit our games. The university is the place that has helped mold them into who they are today. It’s their home.”