The Battle 4 Atlantis tournament opener was no picnic in paradise for Michigan.

The Wolverines faced an early nine-point deficit, committed an alarming rate of turnovers and endured long stretches with senior center Jon Teske on the bench due to foul trouble.

Michigan never panicked or folded. Instead, the Wolverines overcame a season-high 22 turnovers by shooting 57.7% from the field to pull out an 83-76 win over Iowa State on Wednesday at Imperial Arena in the Bahamas. 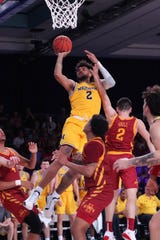 "It wasn't in our game plan to have that many turnovers, but next game we'll do a better job of focusing and making the right play," said junior forward Isaiah Livers, who finished with a team-high 17 points and made a late 3-pointer that helped hold off a late Iowa State push.

"He (coach Juwan Howard) talked about it at halftime making singles. ...The home runs are going to come, but we just have to hit singles first."

Teske had 11 points in limited action and committed four of the team's season-high 19 fouls. Senior guard Zavier Simpson had 10 points, 13 assists, seven rebounds and eight turnovers for Michigan (5-0), which advances to face No. 6 North Carolina in the semifinals at 1:30 p.m. Thursday.

After surviving most of the first half without Teske, Michigan wasted little time widening the gap with him on the floor after halftime. The Wolverines opened the second half on a 14-4 run that featured five points from Teske on a jumper and 3-pointer to push the lead to 55-41 with 14:41 to play.

However, Teske was whistled for his third and fourth fouls less than a minute apart and was forced to check out at the 14:30 mark. Soon after, Iowa State started making a push and cut it to 59-50 on a basket by Prentiss Nixon with 11:17 remaining.

Simpson countered by finding sophomore forward Brandon Johns Jr. for an alley-oop slam and sophomore center Colin Castleton made three baskets over a two-minute span to extend the lead to 68-53 at the 7:59 mark.

But Iowa State didn't wilt and chipped away as star guard Tyrese Haliburton led the charge. The Cyclones pulled within eight points multiple times before sophomore guard David DeJulius and Livers answered back with clutch 3-pointers, the last by Livers to make it 80-69 with 1:40 to go.

Five straight points from Rasir Bolton kept Iowa State in the fight with 40 seconds left, but the Cyclones missed five of their last six shots in the final minute while Michigan made enough free throws to close it out.

DeJulius finished with a career-high 14 points and Castleton added 10 points in 17 minutes — one more minute than Teske played — as 10 Wolverines scored and Michigan held a 31-7 advantage in bench points.

Haliburton played the entire game and finished with 25 points and nine rebounds for Iowa State (3-2), which shot 23.8% (5-for-21) from 3-point range and scored 29 points off Michigan’s 22 turnovers. Nixon scored 14 and Solomon Young added 12 points.

"I was really impressed with Michigan, but there are a couple of concerns that we had going into the game," Iowa State coach Steve Prohm said. "It was their ability to really spread the floor and make the easy 3. That was a big concern and it bothered us big time today."

A rough start due to sloppy passing, two early fouls Teske and a 14-2 run by Iowa State saw Michigan staring at a 16-7 deficit with 13:46 left in the first half.

But the Wolverines eventually settled in, made seven consecutive shots and answered with a 19-5 run to pull ahead. The flurry started with a string of 10 straight points and ended with back-to-back fast-break baskets by Simpson and DeJulius to make it 26-21 at the 8:44 mark.

After Iowa State momentarily went back on top with 5:06 left in the half, Michigan managed to take a 41-37 advantage into the break despite committing 11 turnovers and Teske only playing four minutes.

"They (Iowa State) competed from start to finish," Howard said. "It wasn't an easy matchup for us. We knew coming in they had a lot of length. They're a tough team who has been to the NCAA Tournament many times.

"I'm proud of our team how we stuck together, especially during the stretch in the beginning of the game when they jumped out early on us. Our team continued to keep the mental toughness, not get down on one another and come back in the game with what our game plan was."

Here are other observations from Michigan's win:

►Freshman wing Franz Wagner made his Michigan debut after missing the first four games with a wrist fracture and started in the place of sophomore wing Adrien Nunez. Wagner, who played with his right wrist taped up, finished with six points on 2-for-5 shooting and fouled out in 23 minutes.

While Wagner showed no rust with his shooting stroke by draining a couple 3-pointers, he also displayed active hands in the passing lanes to disrupt Iowa State’s and contested a pair of fast-break layups without fouling, forcing one miss.

►After Teske was whistled for a moving screen twice in the first half, Castleton received some early minutes and had some rough moments. There was a sequence where he took a contested 3-pointer and gave up a basket on the other end that tied the game. That led to redshirt junior center Austin Davis being summoned to replace Castleton. Davis played the final 6:50 and provided valuable minutes to help bridge the gap into halftime.

When Teske picked up his fourth foul in the second half, Howard didn't hesitate to call upon Castleton again and it paid off.

"Colin came in and gave us a big lift," Howard said. "Yeah, at times he struggled in the beginning of the first half and I went to Austin. Austin stepped right in. That was his best six minutes, but that's a guy who it doesn't take time for him to get ready because he's always ready. He prepared like he's a starter.

"Second half I went back to Colin...I didn't go away from Colin. I trusted him. He came right in and he produced."

►Junior guard Eli Brooks' only two baskets of the game came at a critical time and helped get the offense off the mat in the first half. He buried a mid-range jumper and followed that with a 3-pointer to spark the 19-5 first-half run that helped shift the momentum in Michigan’s favor.