The Michigan players refuse to believe they have a mental block when it comes to Ohio State. But the Buckeyes have had the upper hand in the rivalry for the better part of two decades.

Michigan coach Jim Harbaugh takes exception to a question about the talent gap between the Wolverines and Buckeyes. The Detroit News

Ann Arbor — The Michigan players refuse to believe they have a mental block when it comes to Ohio State.

But the Buckeyes have had the upper hand in the rivalry for the better part of two decades. They have won eight straight, including a 56-27 victory over the Wolverines on Saturday at Michigan Stadium. That’s 15 victories in the last 16 meetings. 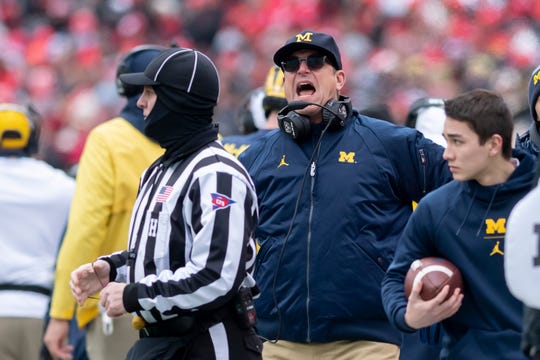 “I don’t think so,” Michigan tight end Sean McKeon said. “They’re just a team. They’re not an NFL team. Just gotta win your one-on-one matchups and just got to have every guy on the field do his job on that play. They did their job better than we did ours in the second half.”

Michigan coach Jim Harbaugh was asked if there’s a talent gap, preparation gap, or a coaching gap, between Michigan and Ohio State.

“I’ll answer your questions, not your insults,” said Harbaugh, 0-5 against Ohio State.

He was told by the reporter it wasn’t meant as an insult, that Ohio State had scored 118 points in the last two games against Michigan, including a 62-39 victory last season.

“They played really good,” Harbaugh said of OSU in response.

“We’ll regroup and come back and play our next game,” he said. “Regroup and retool. Get our guys back and prepare for our next ballgame.”

Michigan quarterback Shea Patterson was asked if the Wolverines match up with Ohio State talent-wise.

“Yeah, I believe so,” Patterson said. “Just in the second half let the game get away from us. We’ve just got to play the same way for four quarters, not two or three.”

Linebacker Jordan Glasgow agreed there’s not mental block when it comes to OSU.

“I don’t feel like that’s the case,” Glasgow said. “There’s a streak, it’s a bunch of individual games, and they’ve been able to continue it on the last seven, eight years. We weren’t able to execute. Execution plays a big role, the biggest role, in fact. We weren’t able to do that.”

Glasgow said there was nothing positive to be immediately taken from the loss to Ohio State.

“Going forward, the only positive thing is we’re going to get better and improve in all aspects of the game which we weren’t able to achieve today,” Glasgow said. “I don’t think anyone’s happy or looking forward to looking at the film.

“I think we’re looking forward to improving and getting better and looking to the next game, which will be our bowl game. I feel like everyone should be anxious to get out on the football field and correct the mistakes made today.”