Michigan basketball to play Kentucky in London, followed by home-and-home

Juwan Howard and Michigan will be taking their show on the international road next season.

Michigan basketball to play Kentucky in London, followed by home-and-home

Juwan Howard and Michigan will be taking their show on the international road next season.

All the way across the pond.

Michigan and Kentucky agreed to a three-year deal that will feature a non-conference game in London and a home-and-home series to follow, the programs announced on Thursday. 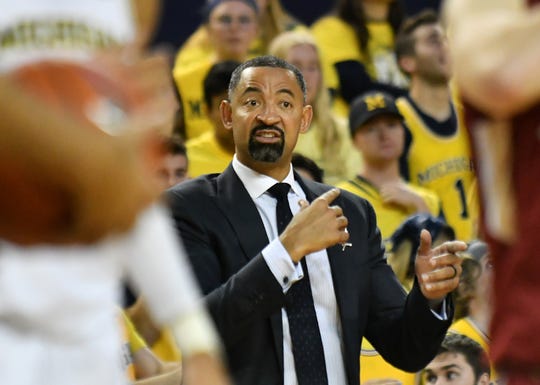 "We're very fortunate to have an opportunity to play Kentucky. I think it's going to be a great matchup for the future," Howard said. "I'm looking forward to next year being in London on a neutral site, enthused about the fact that Coach Cal (John Calipari) has been great throughout the process of making sure that this happened for both schools.

"Overall, I think both teams are going to benefit from it, just the level of competition. We all know Coach Cal has done an amazing job with his program year after year having some of the best, talented players. His coaching staff is phenomenal. In my opinion, they are one of the best in the country. It'll be a good matchup for Michigan."

The game in London will be played in December 2020 at the O2 Arena, marking the first time an NCAA Division I college basketball game will be played at one of the world's most popular venues, and will be hosted by the Naismith Memorial Basketball Hall of Fame.

The O2 Arena has been used for the NBA Global Games during the preseason and regular season. Most recently, the New York Knicks and Washington Wizards played a regular-season game at the stadium last January.

It will be the first on-campus contests between the teams since 1970, as Kentucky will make its second trip — and first since 1967 — to Ann Arbor and Michigan will travel to Lexington for the fourth time.

Kentucky holds a 5-2 advantage in the all-time series and won the most recent matchup with a 75-72 Elite Eight victory in the 2014 NCAA Tournament.

According to Calipari, he reached out to Howard as soon as he was hired at Michigan because he took former Kentucky big man Bam Adebayo under his wing and aided in his development during Howard's time as an assistant with the Miami Heat.

"I called him and I said, 'Listen, if there is any way I can help you or your program, we can talk scheduling and that's something I don't do lightly but with you I will,'" Calipari told reporters on Thursday.

"I said you took care of one of mine so if I can help you in this — now I didn't know they'd be this good. That's where it started. ... It should be a good three-year thing for both programs."

The international game will mark Michigan’s sixth time playing a regular-season contest out of the country and first time playing in Europe.

"I've personally never heard of a college team play overseas in Europe," said freshman wing Franz Wagner, who is from Germany. "Obviously, I'm hyped about that since I'm from there (Europe). I'm really looking forward to that.