Those words will put into effect once again as sophomore forward Brandon Johns Jr. will be unavailable to play Saturday against Presbyterian. 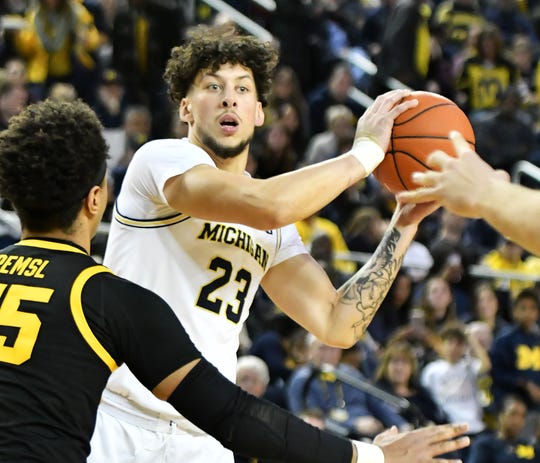 According to Howard, Johns is “dealing with an illness” that he came down with on Thursday.

However, Johns isn’t expected to miss much time considering Michigan won’t play again until Dec. 29, when it closes out the nonconference slate at home against UMass Lowell.

“He'll get healthy and he'll be ready to go after the break,” Howard said.

Johns’ absence could open the door for sophomore wing Adrien Nunez and sophomore center Colin Castleton to receive more minutes off the bench.

Nunez’s playing time has dropped off significantly since freshman wing Franz Wagner has returned from a fractured wrist. After starting the first four games of the season, Nunez didn’t see the floor against North Carolina and Iowa and has averaged 4.4 minutes in his last five appearances.

Castleton has played in all 11 games this season primarily as the backup center, but he could get an opportunity to play longer stretches at the four alongside senior center Jon Teske if Howard wants to turn to a big lineup.

“Colin has played the four many times (in practice),” junior forward Isaiah Livers said. “It's going to be good for him to go out there and show Coach Howard he can play the four.”

“I just see that Brandon is growing up in front of our eyes and it's good to see that Brandon is out there playing with a lot of energy and spirit,” Howard said. “He's inspiring the group. Each and every guy that you see on the bench is cheering for Brandon because he's the type of guy — he just has a fun-loving, good spirit about him. You root for guys like Brandon…I'm happy he's on our side.”

Outlook: Presbyterian has lost three straight and its lone win against a Division I opponent was an 80-77 overtime victory at VMI back in November. The Blue Hose are led by sophomore forward and Flint native Cory Hightower, who is averaging 12.3 points and 5.2 rebounds per game...This will be the first meeting between the two teams.