The former Ann Arbor Skyline standout returned back home and joined Michigan as a walk-on after spending one season at Duquesne.

Ann Arbor — Sometimes it takes a longer route to get to where one wants to go.

Or in Brandon Wade’s case, back to where he always wanted to be.

After leaving Duquesne last spring, the former Ann Arbor Skyline star joined Michigan as a walk-on this week, putting an end to his winding path back home. 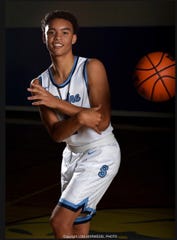 “This is a dream come true,” Wade said Friday after participating in his first practice as a Wolverine. “When you get to grow up in Ann Arbor, there's no other school like Michigan. Obviously, the academics, the sports, the people around here, it means something to be a real Michigan man.

Yet, that opportunity didn’t come right away. Wade, a 6-foot-2 guard, averaged 23.3 points and 7.2 assists as a senior at Skyline and earned All-State first-team honors. He racked up close to 20 offers from mid-major schools, but there was no significant scholarship interest from bigger programs like Michigan.

Wade said he was “really real” with himself during the recruitment process. He wasn’t going to pass on a sure thing from a great school — a scholarship and a chance to play for a coach who believes in him — to go somewhere where nothing was guaranteed.

That’s what led Wade to Duquesne in Pittsburgh, a place that “felt like home” and had one of the best coaches he ever met in Keith Dambrot. As a freshman last season, Wade played behind fellow freshman Sincere Carry in the rotation and tallied 28 points and 22 assists in 27 games, with one start.

But once the season ended, Wade took a step back and realized the year was "very up and down" in terms of what he thought he wanted out of college. As a result, Wade opted to enter the transfer portal in a decision, he said, that wasn't based on his fluctuating playing time.

“It was more that I’m really big into mental health and how I feel about myself,” Wade said. “After the year I needed to reflect on myself because the game is a lot more than just the game of basketball.

“I was reflective on myself, what I wanted out of myself and what I did the past year. Knowing what Michigan has and what they can give me as a man and as a basketball player, it's everything I wanted."

Still, getting to Michigan was a months-long process. After he departed from Duquesne, Wade started looking at his options and received scholarship offers from Mid-American Conference schools like Eastern Michigan and Toledo, where his father, Keith, was a standout guard from 1987-91.

Throughout the transfer process, though, Wade said he was “very open” about his interest in Michigan with every coach he spoke to.

Wade was first in contact with former coach John Beilein until he, like everyone else, was thrown through a loop when Beilein left for the NBA. During the coaching search, Wade remained in touch with assistant coach Saddi Washington as well as several Wolverines he had built relationships with during high school.

After Juwan Howard took over, Wade said he had “great conversations” with him and the new coaching staff before Howard extended the opportunity to join the team as a walk-on. And the more Wade was around the team, the more he knew what he wanted to do. 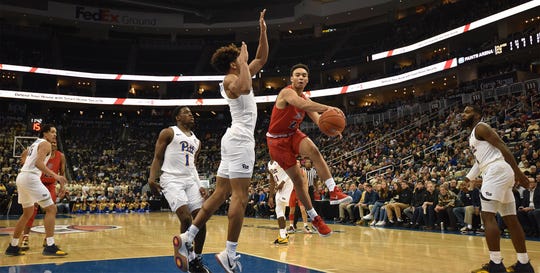 By the summer, Wade eliminated his other options and narrowed his focus to getting into Michigan. He started taking classes at Washtenaw Community College and took more in the fall to make sure it was possible.

Wade estimates he submitted his application to Michigan up to two months ago and had it accepted last week. He’ll register for classes for the winter semester during his orientation on Jan. 6-7.

“Being here now, it's just like, ‘Whoa.’ It's almost like I've been looking at a college brochure my whole life,” said Wade, who grew up “literally two, three minutes” away from campus. “Just being around it and everybody here, it's family.

“This school means everything to me.”

Adding a player to the roster during the season isn’t something that has happened often at Michigan, especially near the midway point. But Howard said Wade is a “positive, hardworking kid” who has a team-first mindset that fits with the program.

“He's interesting,” Howard said. “He's a guy who had a scholarship at Duquesne and was learning, grinding, getting better. Decided that this wasn't a good situation for him and wanted to find a better situation and it so happened we had a spot available. Now we're going to help him grow. We're going to coach him up and develop him and we'll see where it goes from there."

Wade described himself as a combo guard who plays “the right way,” who doesn’t try to do too much or too little, and who strives to be “an ultimate contributor.”

While he’s ineligible to play this season due to transfer rules and his status for the first semester of the 2020-21 season is to be determined, Wade wants to help the team as much as possible and push his teammates to be the best they can be.

And even though he won’t be able to suit up in a game anytime soon, Wade noted he’ll still be motivated every day to prove himself as he transitions from the Atlantic 10 to the Big Ten.

“I know what position I'm in now and I know going into this what it's going to take to actually get onto the floor,” said Wade, who will have three years of eligibility left and will be part of a guard group that will include Eli Brooks, David DeJulius and newcomer Zeb Jackson next season.

That first day came Friday when Wade arrived at Crisler Center, slipped on his new No. 4 jersey and took the court for the first time as a Wolverine.

“It was surreal,” Wade said, with a smile. “Everything I have been working for since the spring has led me to this exact point and now I get to ride with it.”