Growing pains at Michigan were to be expected with a new offensive coordinator.

Orlando, Fla. – Growing pains were to be expected with a new offensive coordinator, but the early part of Michigan’s season definitely tested the Wolverines' pain threshold.

The season opened with a fumble on the first play, a week later they needed double overtime to beat Army, and by the midway point of the season, the Wolverines were ranked 118th nationally of 129 teams in turnovers lost. Michigan had fumbled 17 times and lost nine of them. 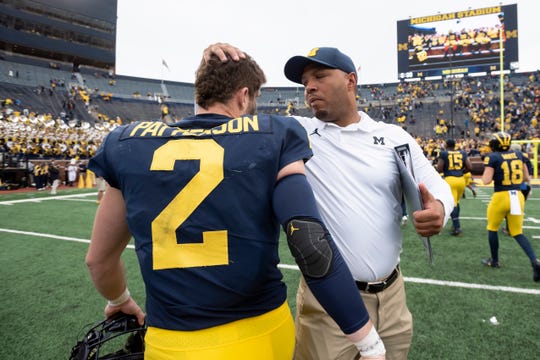 This was supposed to be the launching of first-year offensive coordinator Josh Gattis’ self-proclaimed speed-in-space offense, but the propensity for turnovers significantly stunted its growth.

“You know, there was a point in the year when a lot of people were saying, ‘Give up and quit. Hey, this isn’t working. This isn’t it,’” Gattis said Sunday.

Michigan (9-3) is now making final preparations to face Alabama (10-2) in the Citrus Bowl on Wednesday.

Gattis said Sunday that he borrowed a few things that had worked last season, all while honing new plays and curbing turnovers. The players have pointed to the second half of a near-comeback at Penn State that things began to click on offense.

Michigan won four straight after the loss at Penn State and averaged 41.5 points a game. The streak was snapped with a 56-27 loss to Ohio State, but Shea Patterson became the first Michigan quarterback with three straight 300-yard passing games. He finished the regular season that way and the Wolverines went the final six games losing two of six fumbles, improving their ranking to 62nd nationally.

“Anytime (you have) a new offense – and Coach Gattis had to come in and adjust to new players, and we had to learn new schemes – there’s going to be some growing pains,” Patterson said. “But I know in the end, right now, it’s going really well.”

Gattis said the players were resolute and bought into his system immediately and never wavered.

“They truly knew who we were in practice, who we were in games,” Gattis said. “And it was a testament to their character to fight through everything.”

Ironically, Gattis was co-offensive coordinator at Alabama last season and also coached the Tide's group of supremely talented receivers. This was his first season as a coordinator and first time calling plays. 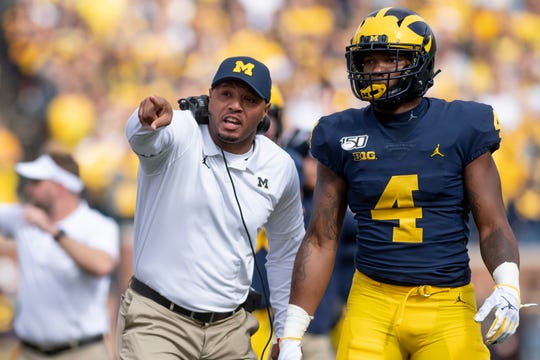 There was plenty of newness to go around – to the players learning a new system, to Gattis getting adjusted to his role.

“The thing that you really learn the most is every play call, every play lives with you past that day,” Gattis said. “As a position coach, you can kind of go to bed at night and wake up the next morning after a game ready to move on. As a coordinator, you don’t sleep at night.

The players describe Gattis as highly charged, emotional and an upbeat leader. He chooses the half-full approach, knowing he could focus on the negatives and get stuck dwelling on them instead of seeking ways to improve.

In his first season as a play caller, he has had to deal with difficult moments and games, but coaches have to respond to adversity, just as they preach the same to their players.

“We can laugh about it now, (but) our first play of the season ended with a fumble,” Gattis said. “So when you’re sitting there on your first play call, the next thing you know, the ball’s on the ground. You’ve got to learn how to deal with adversity.

“But I think, really, the thing that really inspired me and inspired our offense is I knew that I could look in the eyes of our young men each and every week and they never lost faith. They never lost confidence. And when your players play for you and they play for each other, good things are going to ultimately end up happening.  We've got a great culture within our team, within our offense, and we're really proud of everything that we've accomplished."

Much has been made since the Citrus Bowl was announced of Gattis having that year of experience at Alabama and how that might translate as an advantage for the Wolverines. Players have said he’s been a good resource because of his insights regarding Alabama’s offense and defense.

“And (Michigan defensive coordinator Don) Brown does an amazing job in battling us. And that's one thing that's led us to get better, is going against our defense every day."

Alabama defensive coordinator Pete Golding said Michigan does have a bit of an edge with Gattis on staff.

“He knows our system, and he knows some of the rules of the system," Golding said. "But you've got to execute. As coaches, you call the play. The players got to execute the play. You know, it ain't always perfect. So we've got to do a good job of extending disguises, some fronts and some coverages."

The Crimson Tide have shown some vulnerability on defense this season. Alabama lost both starting inside linebackers to torn knee ligaments before the season, then starting defensive end LaBryan Ray was lost after the third game of the season with an injury, and now starting nose tackle D.J. Dale has a knee injury and is not expected to play in the bowl. Cornerback Trevon Diggs and linebacker Terrell Lewis have opted to skip the bowl and prepare for the NFL Draft.

Gattis was asked if the Alabama defense is, indeed, vulnerable.

“The defense is very talented,” he said. "They played pretty good throughout the year. One of the things that stands out is they're second in the country in turnover margin. So they present a number of different challenges that we have been preparing for and we're looking forward to the battle.”