Since winning their first bowl game under coach Jim Harbaugh, the Wolverines have lost four straight and this time fell to Alabama.

Since winning their first bowl game under coach Jim Harbaugh, the Wolverines have lost four straight, including a 35-16 loss to Alabama before 59,746 at the Citrus Bowl on Wednesday. Najee Harris gave the Tide their last touchdown with 26 seconds left as the Tide scored 21 unanswered second-half points.

The Wolverines (9-4) were hoping to reach the 10-win plateau and numb some of the disappointment of another regular season-ending loss to Ohio State with a signature win over a big-name program. Some wondered whether Alabama, typically in the national playoff this time of year, would be mentally into playing this bowl. 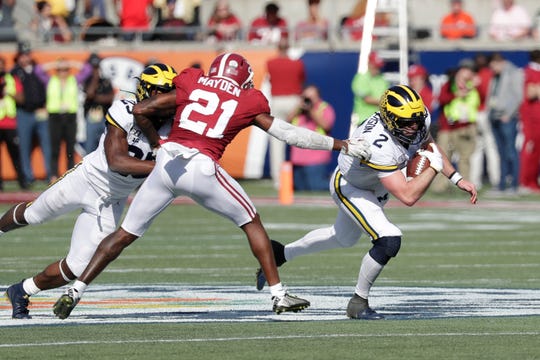 Clearly, Alabama coach Nick Saban got his players’ attention in the second half, holding the Wolverines scoreless while the Tide offense hit big plays and swung the momentum after trailing 16-14 at halftime.

Michigan’s only touchdown came on a 7-yard pass from Shea Patterson to Nick Eubanks in the first quarter, and Quinn Nordin came through with three field goals, including a Michigan-record-tying 57-yarder before the half.

“Their ability to create the big play was critical in the game and their ability to keep us out of the end zone — we had long drives and settled for field goals,” Michigan coach Jim Harbaugh said. “I think at the end, you know, stopping us when we had a chance on the interception and then came back and drove the length of the field for 80 yards or so (in the first quarter), that was a huge difference in the game.”

The main storyline during the weeks heading into the game was Alabama’s receivers, featuring three first-round NFL prospects, and they didn’t disappoint.  Alabama receiver Jerry Jeudy was a back-breaker for the Wolverines. On the Tide’s first play of the game, Jeudy scored on an 85-yard reception. Then, in the fourth quarter, he had a huge 58-yard catch in Alabama’s scoring drive that built a 28-16 lead. Jeudy finished with 204 yards and of Alabama’s 405 total yards, 322 were passing.

But perhaps even more telling was how Saban was able to get his players interested in finishing a season that had disappointments including key injuries on defense early on and two losses to LSU and Auburn late in the season. The Tide finished 11-2.

“This team had a lot to prove in this game,” Saban said. “We have a culture of how we play football at Alabama, with great effort, great toughness, but also discipline to execute and accountability for everybody to do their job. That's always been the trademark of what we do. And people make decisions based on what's best for the team.

The Wolverines had proven their vulnerability in pass defense in the loss to Ohio State when the Buckeyes had 15 receptions for 313 yards and four touchdowns. They were equally as porous against the Crimson Tide.

“I know it’s kind of hard, but I keep saying it’s explosive plays,” Michigan linebacker Cam McGrone said. “Ohio State had a whole bunch of passes down the field, quarterback scrambling, Alabama the same thing. It was like you were looking in a mirror.”

In his final game as Michigan’s quarterback, Shea Patterson was 17-of-37 for 33 yards and had one touchdown and two interceptions, including one late in the game. Michigan had 395 total yards, including 162 rushing.

“I didn’t play my best,” Patterson said. “Missed a few throws. Thought I could have calmed my feet down early on. I felt like I didn’t make enough plays. Yeah, not my best game.”

In the first half, although Michigan settled for field goals after the first touchdowns, it appeared the Wolverines had a slight upper hand. They ran 45 plays in the first half to Alabama’s 23 and had 286 total yards, including 135 rushing. Zach Charbonnet had 10 carries for 73 yards but finished the game with 84 yards on 13 carries.

Saban said Michigan was hurting Alabama running the ball in the first half, so the Tide made adjustments.

“In the second half we decided to play nickel, which gives us more multiples of things that we can to. We're a little smaller on the field when we do that, but it's easier to adjust and the players did a really good job of it and we were able to pressure more, which really helped us stop the run.”

Michigan gave up 153 rushing yards, but Najee Harris, who finished with 136 on 24 carries, got his second touchdown with 26 seconds left on a 2-yard run.

McGrone was asked how deflating it was giving up the late score.

“It was kind of a smack in the face, but it is what it is,” McGrone said. “It’s football. We’ve got to be ready all times, and we weren’t ready that play.”

In the end, Michigan couldn’t play a complete game.

“We played them well in the first half,” Patterson said. “Quinn came in and kicked the ball really well. Defense played lights out. It’s a tough one. Alabama’s a great team. They had a lot of great players. Didn’t do enough to win.”

Jim Harbaugh is 1-4 in bowl games as Michigan’s coach:

Michigan has given up 35 or more points six times, all losses, during Don Brown’s tenure as the Wolverines’ defensive coordinator: 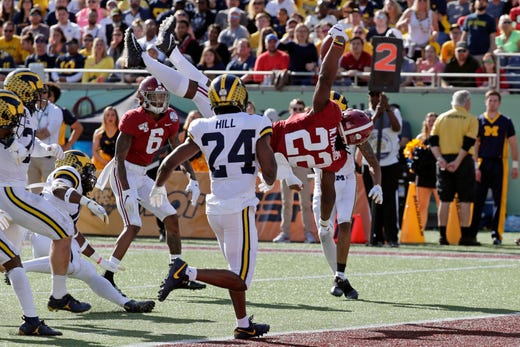 Alabama running back Najee Harris (22) scores a touchdown on a 9-yard run as he leaps past Michigan defensive back Lavert Hill (24) during the first half of the Citrus Bowl. John Raoux, AP
Fullscreen 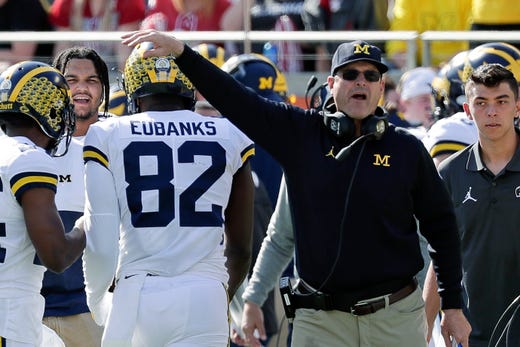 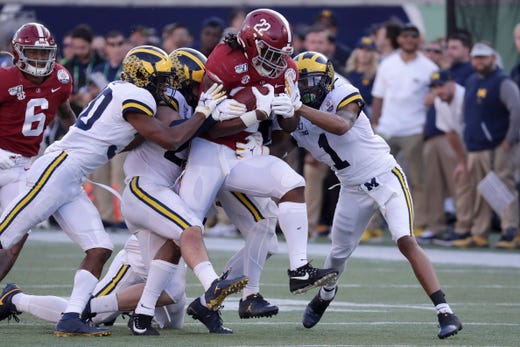 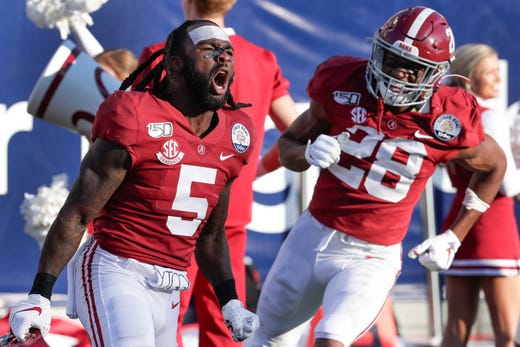 Alabama defensive back Shyheim Carter (5) celebrates after an interception against Michigan with teammate Josh Jobe (28) during the second half of the Citrus Bowl. John Raoux, AP
Fullscreen 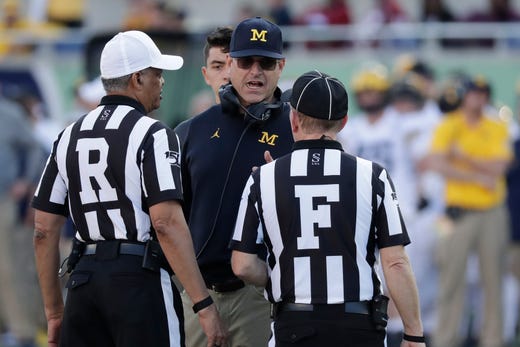 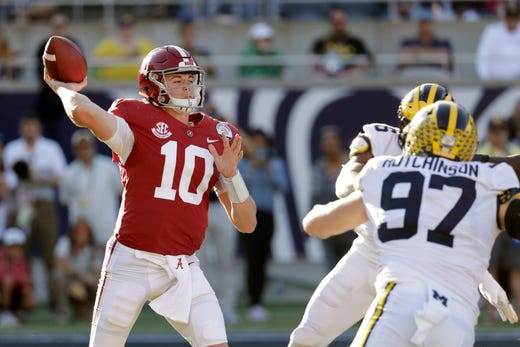 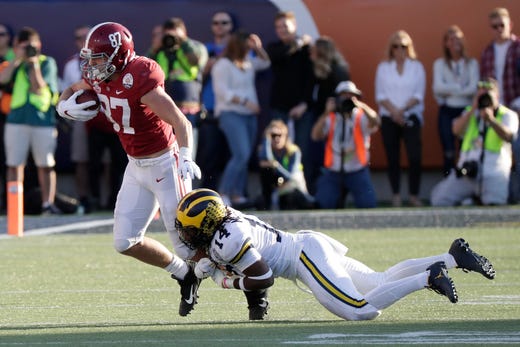 Alabama tight end Miller Forristall (87) tries to get past Michigan defensive back Josh Metellus (14) after a reception during the second half of the Citrus Bowl NCAA college football game. John Raoux, AP
Fullscreen 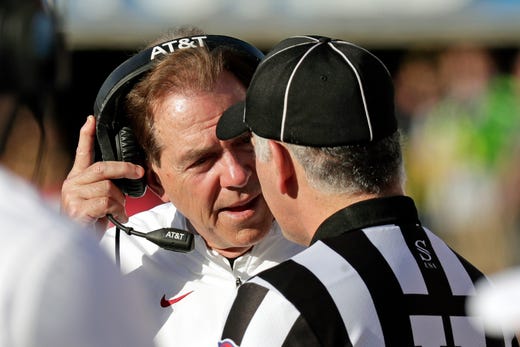 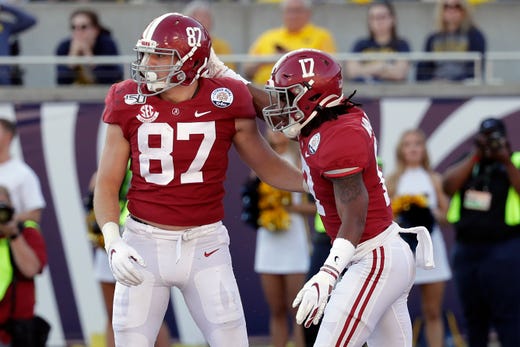 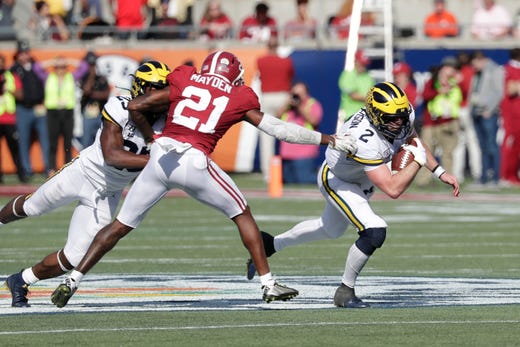 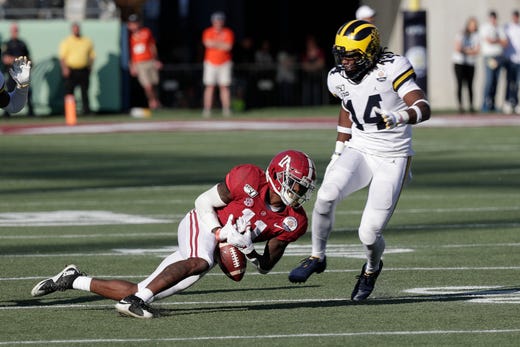 Alabama wide receiver Henry Ruggs III (11) can't hang on to a pass as he is defended by Michigan defensive back Josh Metellus (14) during the second half.John Raoux) John Raoux, AP
Fullscreen 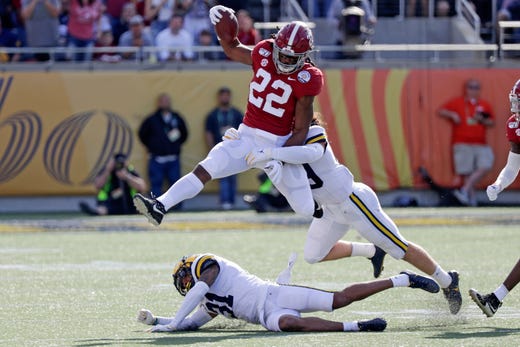 Alabama running back Najee Harris (22) gains yardage as he tries to get past Michigan defensive back Vincent Gray (31) and defensive back DeMarcco Hellams, right, during the first half of the Citrus Bowl NCAA college football game John Raoux, AP
Fullscreen 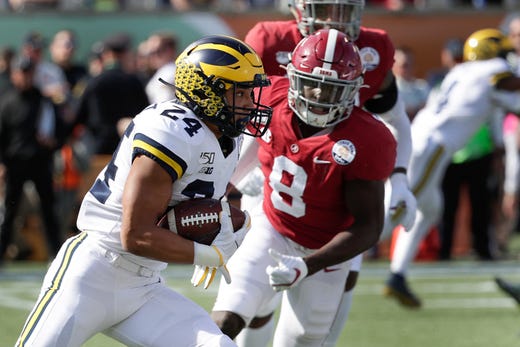 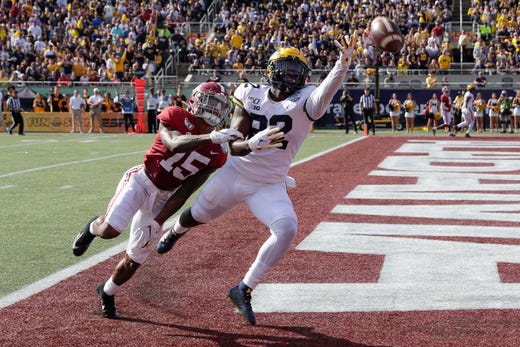 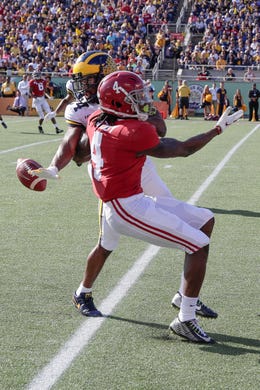 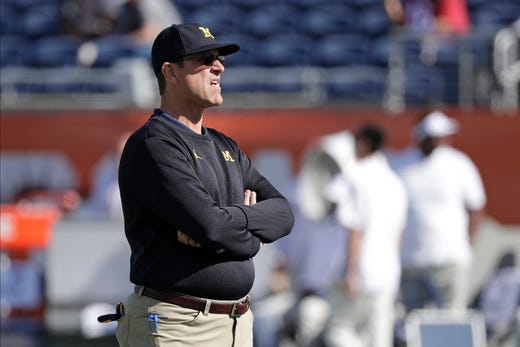 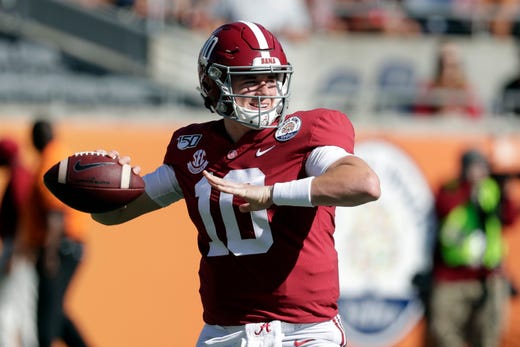 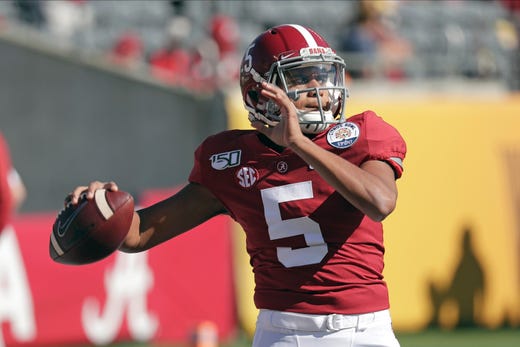 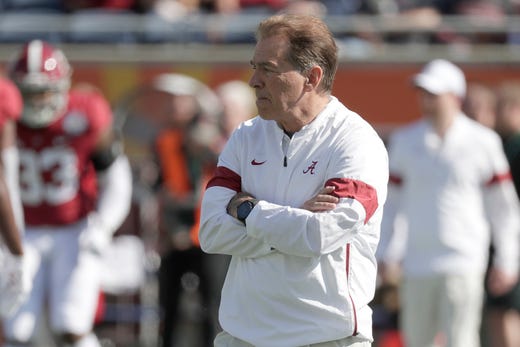 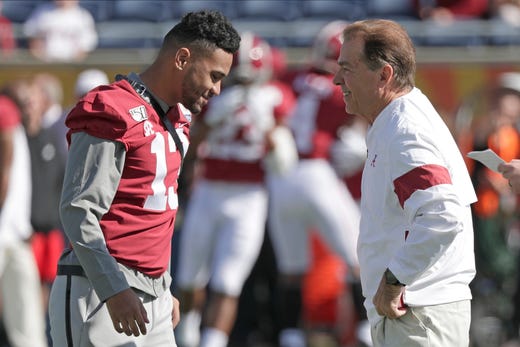