In last season’s three meetings, Winston was a thorn in the Wolverines’ side as he tormented their ball-screen defense and averaged 21.3 points and 8.7 assists while shooting 44.2 percent (19-for-43) from the field.

He was going to suit up. 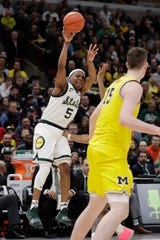 With the odds of that happening at zero percent, the next-best solution for No. 12 Michigan to turn the tide in the rivalry series is to find a way to slow down Spartans star Cassius Winston in Sunday’s showdown in East Lansing.

In last season’s three meetings, Winston was a thorn in the Wolverines’ side as he tormented their ball-screen defense and averaged 21.3 points and 8.7 assists while shooting 44.2 percent (19-for-43) from the field.

“I need to be asking you for that answer,” Howard said when asked about the challenge of stopping Winston in the half-court offense. “He's a very elite player. Smart point guard, does amazing things with the basketball. Very good in ball screens, on reading actions. He has a great patience, great pace to his game. He can shoot the ball very well from outside.

“I was totally shocked, to be honest with you, that he decided to come back for his senior year because last year he played extremely well. … I had a chance to watch him a lot, especially the three games that they played against Michigan last season. I just thought the kid played phenomenal and he's still doing the same thing this year.”

While Howard said it was “painful to watch” Michigan lose all three meetings — with two of those losses denying the Wolverines a share of the Big Ten regular-season title and a third straight conference tournament crown — Winston was the catalyst who made it happen.

Looking back at the film, Howard noted how prepared Winston was to handle a Michigan defense that gave most opponents fits based on some of the reads and plays he made off of ball screens.

“It never felt like he was sped up in any kind of way,” Howard said. “There were possessions in the game where it was in our favor and felt like it was headed toward a victory for us, but some type of way Cassius found a way and that's what happens when you have guys that figure it out, have that competitive drive and juice. He's one of those guys that has the ‘It’ factor."

Sophomore guard David DeJulius knows just how hard it is to defend Winston. The two played on the same metro Detroit-based AAU team — The Family — when they were in elementary school and grew up working out with one another. 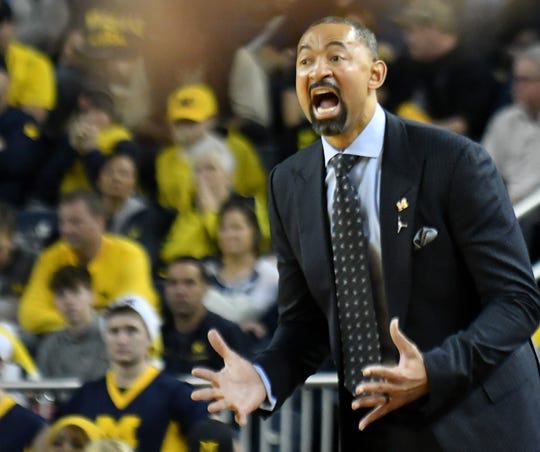 But even though DeJulius knows a lot about Winston, that doesn’t mean it’s any easier to prepare for him.

“He's a very crafty player, always been smart,” DeJulius said. “People always talk about maybe he's not athletically this or athletically that, but he always dominated his opponent because he out-thought them and outsmarted them.”

As DeJulius sees it, there were two common themes in last season's games against Michigan State. The first was Michigan’s inability to finish strong after leading in the second half of each contest.

The second was the inadequate job Michigan did against Michigan State’s pick-and-rolls and inability to prevent Winston from picking apart the defense, whether it was whipping passes to open shooters, attacking the basket or knocking down shots.

“There’s a lot that goes in (to game planning against Winston) because he's one of the best point guards in college basketball,” DeJulius said. “He's an elite passer. He's an elite scorer. He's an elite leader. We know that we have to be active, everyone has to be engaged.

Senior center Jon Teske said Winston's ability to get in the lane and make floaters or pull up and bury mid-range shots off a ball screen adds to the defensive chess match.

"It puts a lot of pressure on us," Teske said. "When he's coming down at us downhill, coming at us when they have a 2-on-1 or just 1-on-1, we have to try to use our length to our advantage. It's like a cat and mouse game, play games with him and give him different looks."

According to DeJulius, Michigan State’s championship pedigree, tradition and “swagger” make the Spartans a tough test for any team, especially in East Lansing.

But the toughest task of all centers around Winston.

“They had our number last year and they deserved to win all three of those games,” Teske said. “It's a new year, new teams.