Peoples-Jones missed the first two games this season because of an injury, but finished third in receiving with 438 yards on 34 catches.

Michigan will be without receiver Donovan Peoples-Jones, who announced Saturday he will enter the 2020 NFL Draft.

Peoples-Jones, a 6-foot-2, 208-pounder, played at Detroit Cass Tech and was rated the No. 1 receiver nationally coming out of high school. In his final season with the Wolverines, Peoples-Jones missed the first two games because of an injury, but finished third in receiving with 438 yards on 34 catches. His six touchdowns were second among receivers behind Nico Collins, who had seven. 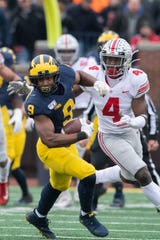 He thanked his family, Michigan fans, his teammates and coaches and said he was grateful to be part of “the Michigan legacy.”

“After much prayer and discussion, I have decided to forgo my senior season and will enter the 2020 Draft,” Peoples-Jones wrote in a social media post. “This has always been a lifelong dream of mine and I am excited for the new opportunities in store for me.”

Peoples-Jones was third-team All-Big Ten this season by the coaches and was honorable mention the last wo seasons as voted by media. He was Michigan’s primary punt returner and this season had 24 returns for 173 yards.

Before Michigan’s appearance in the Citrus Bowl last Wednesday, Collins said he was pondering his next step and planned to discuss with his family whether to return to school or head to the NFL.

Another Michigan receiver, Tarik Black, is in the NCAA transfer portal.

This has been a position of depth for the Wolverines and several talented, fast receivers return, including Ronnie Bell and Giles Jackson, who had 57 yards on four catches including a 40-yarder against Alabama in the bowl game. Bell led the team in receiving with 758 yards on 48 catches and had one touchdown. Collins was second with 729 yards on 37 catches and the seven touchdowns.

Tight end Nick Eubanks already announced his decision to return, and that position has athleticism with sophomore Luke Schoonmaker and freshman Erick All.

Peoples-Jones’ departure comes a day after center Cesar Ruiz announced his decision to forgo his final season for the NFL. Michigan will have a first-time starter at quarterback working behind an offensive line that must now replace four starters — left tackle and two-time first-team All-Big Ten Jon Runyan, All-Big Ten first team left guard Ben Bredeson and right tackle Michael Onwenu are all gone, and backup Stephen Spanellis announced after the bowl game that he will be a graduate transfer.