Running back Tru Wilson to leave Michigan as a grad transfer

Michigan running back Tru Wilson was third on the team in rushing with 44 carries for 221 yards and one touchdown.

Running back Tru Wilson to leave Michigan as a grad transfer

Michigan running back Tru Wilson, the former walk-on out of Warren De La Salle who earned a scholarship and made his name as a hard-nosed blocker and runner, has decided to transfer after graduating in the spring.

Wilson, who made the announcement Thursday on Twitter, will have one year of eligibility, and as a graduate transfer will not have to sit. 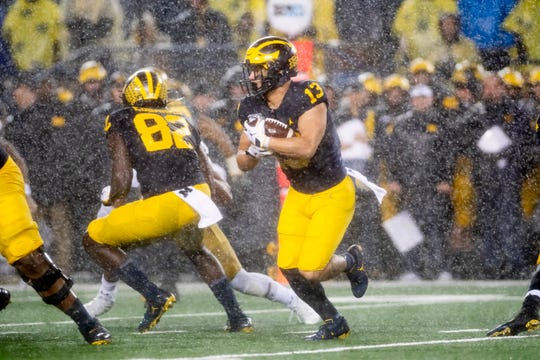 “I appreciate everything the University of Michigan had done for me these last 4 years,” Wilson wrote.

He was third on the team in rushing with 44 carries for 221 yards and one touchdown. He broke his right hand in the season opener and then missed the next two games. Wilson had 364 yards rushing and a touchdown in 2018 and was the Wolverines’ most experienced back returning in 2019.

But freshman Zach Charbonnet and redshirt freshman Hassan Haskins, who converted to running back from linebacker, got the bulk of carries last season. Michigan also will have Chris Evans back this season after sitting out the year for an academics-related suspension from the university.