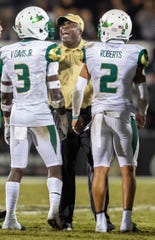 Michigan announced the hires on Saturday and also revealed Jay Harbaugh will be special teams coordinator, in addition to his work as running backs coach. He had been an assistant on special teams with Partridge, who coordinated the group.

“I am excited about the addition of Brian and Bob to our defensive coaching staff," Jim Harbaugh said in a statement. "Brian and Bob are well-respected, experienced coaches who represent great fits for the University of Michigan.

“Both coaches have experience coordinating some of the best defenses in the country, and their development of all-conference and future NFL players throughout their careers will benefit our program and student-athletes.”

Jean-Mary spent the last 10 seasons working with Charlie Strong, first at Louisville as an assistant head coach/linebackers, then at Texas and USF.

Shoop is a two-time Broyles Award finalist who spent the last two years coordinating the defense at Mississippi State. The 2018 Bulldogs were the only defensive unit in the FBS to finish top 10 in all four major defensive categories — total defense, scoring, rushing and passing.