Michigan's Isaiah Livers has to go through a practice before he returns to game action, Juwan Howard says

Livers dressed and participated in the team’s pregame warm-ups against Iowa last Friday for the first time since he suffered the injury on Dec. 21.

Michigan's Isaiah Livers has to go through a practice before he returns to game action, Juwan Howard says 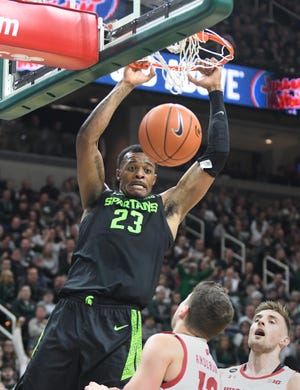 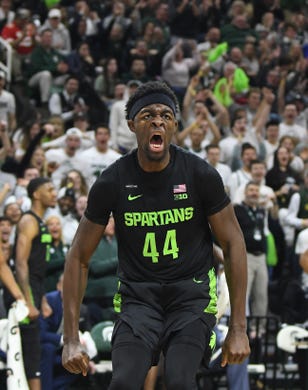 1. Michigan State (14-4, 6-1) – The Spartans were able to bounce back from the blowout loss at Purdue by winning comfortably at home over Wisconsin. The win came despite Cassius Winston struggling for the second straight game; however, the supporting cast led by Gabe Brown (pictured) got rolling again to avoid a second loss. The key for the Spartans this week as they hit the road to face Indiana and Minnesota will be getting a similar performance away from home. Last week: 1. Daniel Mears, Detroit News
Fullscreen 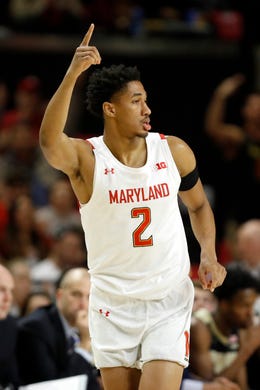 2. Maryland (14-4, 4-3) – If not for a last-minute 3-pointer from Wisconsin’s Brad Davison, the Terrapins would have had a critical road victory early in the week. Still, the Terps returned home to get past a surging Purdue team to keep pace in the Big Ten. However, the road beckons again this week as the Terps take on Northwestern and Indiana, both away from home. Last week: 2. Julio Cortez, Associated Press
Fullscreen 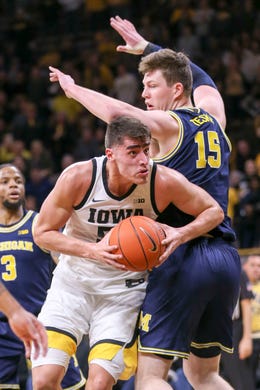 3. Iowa (13-5, 4-3) – It was another big week for the Hawkeyes, led by big man Luka Garza (pictured_, who scored 27 in the victory over Northwestern then poured in 33 to help the Hawkeyes knock off Michigan. Iowa now has won three in a row and gets a bit of a break this week with just one game. It comes at home, but it is far from a piece of cake as a surprising Rutgers team comes to Iowa City. Last week: 5. Rebecca F. Miller, AP
Fullscreen

4. Illinois (13-5, 5-2) – The Fighting Illini aren’t exactly putting up impressive wins, but they’re winning, nonetheless. They’ve now won four in a row after holding off Northwestern at home, and now get set for a difficult week that begins with a trip to Purdue followed by playing at Michigan. Get at least one win out this trip, and the Illini could be in the race for the long haul. Last week: 3. Holly Hart, Associated Press
Fullscreen 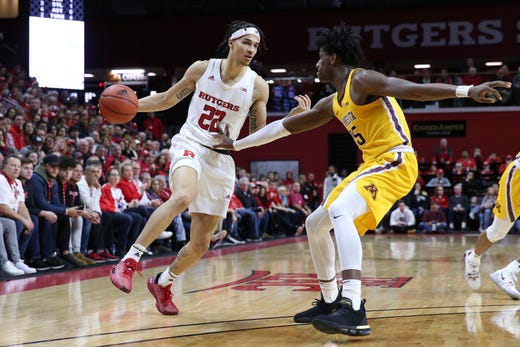 5. Rutgers (14-4, 5-2) – It’s officially time to stop ignoring the Scarlet Knights. They have lost just once in the last nine games, and that came by three points on the road to Illinois. Rutgers rebounded from that loss by beating Indiana at home then shrugging off a slow start Sunday to beat Minnesota at the RAC. A tough trip to Iowa is next, a game that is critical in the race for the Big Ten title. Last week: 9. Rich Graessle, Associated Press
Fullscreen 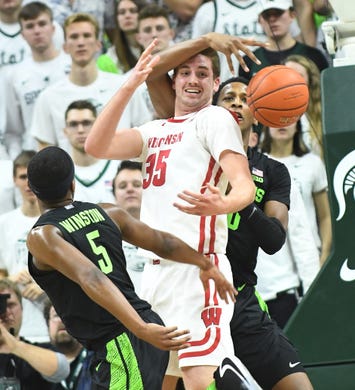 6. Wisconsin (11-7, 4-3) – The Badgers were playing as well as any team in the Big Ten entering their game Friday at Michigan State. They had just beaten Maryland on a last-minute 3-pointer, and had won six of seven games. However, that run ended in East Lansing and now the Badgers look to get back on track this week at home against Nebraska before heading to Purdue. Last week: 7. Daniel Mears, Detroit News
Fullscreen 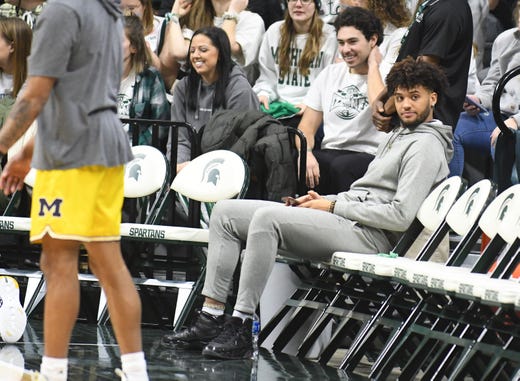 7. Michigan (11-6, 2-4) – Things have started to spiral out of control for the Wolverines, who now have lost three out of four after getting beat at Iowa. How much of it is because of the loss of Isaiah Livers (pictured) to a groin injury is tough to gauge, but the sooner he gets back the better as the Wolverines spend the upcoming week at home, but will be tested with games against Penn State and Illinois. Last week: 4. Daniel Mears, Detroit News
Fullscreen 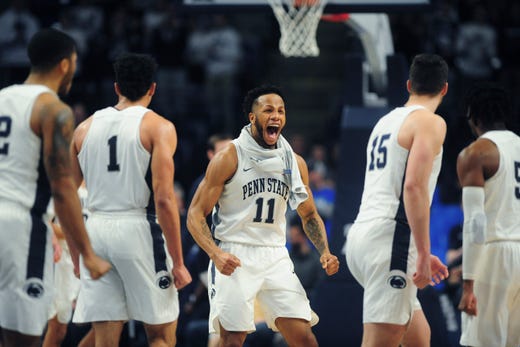 8. Penn State (13-5, 3-4) – There might not have been a team in the entire conference that needed a win as badly as the Nittany Lions did entering their matchup with Ohio State. After losing three straight, including a stinker at home, Penn State looked more like an NCAA Tournament team by beating the struggling Buckeyes. A trip to Michigan this week will be critical in keeping pace in the conference race. Last week: 11. Gary M. Baranec, Associated Press
Fullscreen

9. Purdue (10-8, 3-4) – There might not be a tougher place to play in the Big Ten than Mackey Arena. However, the Boilermakers have to play half their games on the road, and so far they’re 0-4 away from home in conference play. It’s hard to get an accurate gauge on this group that has lost three of four, but they do get both Illinois and Wisconsin at home this week. Last week: 6. Julio Cortez, Associated Press
Fullscreen 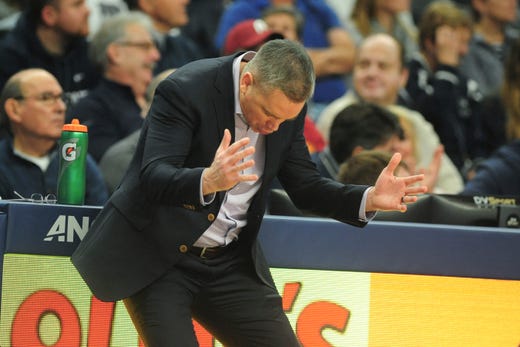 10. Ohio State (12-6, 2-5) – Things have really gone off the rails for the Buckeyes, who now have lost five of six with the only victory coming at home against Nebraska. The analytics still love Ohio State, thanks to some big nonconference wins, but the Buckeyes are playing themselves out of the Big Ten race as they’re now four games out of first place with a home game against Minnesota and a trip to Northwestern this week. Last week: 8. Gary M. Baranec, Associated Press
Fullscreen 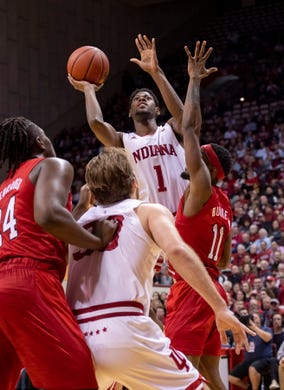 11. Indiana (14-4, 4-3) – The Hoosiers helped themselves the past week by splitting a pair of road games, losing at Rutgers before getting a victory at Nebraska, and now have won three of four. This week will be a chance to the Hoosiers to prove they belong in the Big Ten title chase as they host two of the front-runners with Michigan State coming to town Thursday, followed by Maryland on Sunday. Last week: 10. Doug McSchooler, Associated Press
Fullscreen 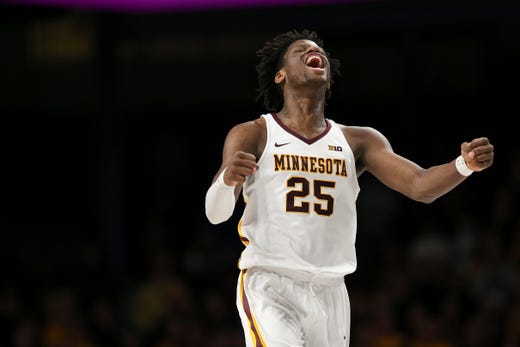 12. Minnesota (10-8, 4-4) – The Golden Gophers have one of the best players in the conference as big man Daniel Oturu (pictured) continues to dominate other opponents. However, the Gophers simply can’t find any consistency and, like many teams in the Big Ten, can’t win big games away from home. They’ll get another shot this week when they travel to take on Ohio State before hosting Michigan State on Sunday. Last week: 12. Stacy Bengs, Associated Press
Fullscreen 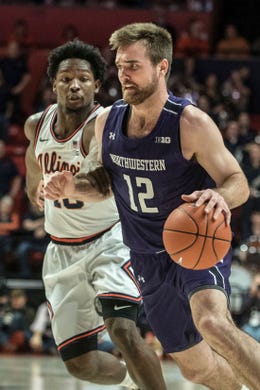 13. Northwestern (6-11, 1-6) – There won’t be a ton of wins to pile up for the young Wildcats, but there are signs of life. This week the ‘Cats hung tough with Iowa for a good chunk of the game, and pushed Illinois to the limit on the road before losing by four. Visits this week from Maryland and Ohio State will be big as the ‘Cats look to disrupt the conference race. Last week: 13. Holly Hart, Associated Press
Fullscreen 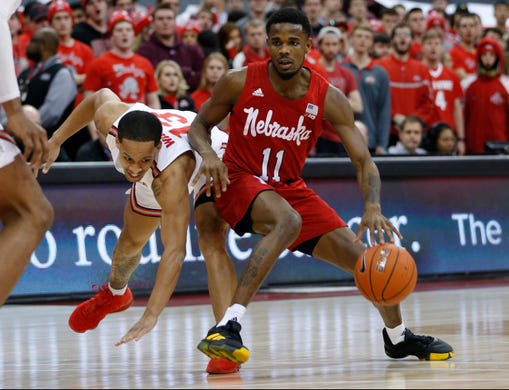 14. Nebraska (7-11, 2-5) – The Cornhuskers were flying high after the win over Iowa two weeks ago, but since then it’s been a rough road compounded last week with losses at Ohio State and to Indiana. Finding that next win doesn’t get any easier this week as the Huskers hit the road to take on Wisconsin and Rutgers. Last week: 14. Jay LaPrete, Associated Press
Fullscreen

According to Howard, the next step for Livers is to go through a complete practice. 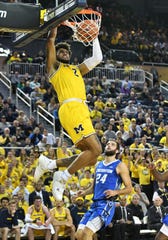 “We’re looking forward to Isaiah joining us in practice very soon. That's a part of Isaiah getting closer to joining his teammates on the court,” Howard said Tuesday before the team’s practice. “My philosophy is I like to see our guys practice at least once or twice and hopefully soon Isaiah will get a chance to go out there and compete and see how he feels after a practice.

“When you haven't done anything in the last four to six weeks, you're going to be sore but how do you feel from that injury? That's the key point, the next day.”

Before Michigan’s game at Iowa last Friday, Livers was dressed and participated in the team’s pregame warm-ups for the first time since he suffered the groin injury against Presbyterian on Dec. 21.

But during his radio show on Monday night, Howard said Livers is still “not ready to go” before adding Monday was the first day he was on the court and practiced “a little bit.”

“He wasn't able to practice the entire two hours of practice, but it was good to see that he had a uniform on out there with a basketball in his hands and with his teammates,” Howard said. “I feel sad for him because he's one of those guys that felt like he let his teammates down by not being out there, but you can't control those type of injuries.”

Howard said the team will continue to be “very delicate” with Livers to avoid rushing him back, aggravating the injury and have him miss another extended period of time.

Livers has been sidelined the last five games and the Wolverines (11-6, 2-4 Big Ten) have missed his versatility on both ends of the floor. They have allowed opponents to average 82.5 points over the past four contests, which has led to three losses. They also haven't shot better than 36 percent from 3-point range during that span without Livers, the team's second-leading scorer (13.6 points) who is shooting 50 percent from beyond the arc.

If Livers is unable to play against the Nittany Lions, sophomore forward Brandon Johns Jr. will likely take his place in the starting lineup once again and will have the challenge of guarding Penn State’s leading scorer Lamar Stevens.

"He's a really versatile player, so I just can't take it lightly on him.”

As Livers continues to inch closer to a return, senior center Jon Teske said he's been acting like another coach on the bench while Howard said Livers has been growing as a leader and as a player by seeing the game through a different lens.

But through it all, Howard said it has been a “frustrating process” for Livers.

"One of the best things that I've witnessed with Isaiah was that he told me he was vulnerable. He said, 'Coach, this is a tough time for me right now and I'm going through it,'” Howard said. “I thought that was beautiful for Isaiah to share that information with me and feel comfortable with sharing some personal feelings, the experience of an injury and trusting me in that way. My best advice to him — and I'll give it to you the short way — is that every player goes through this at some point in their career whether it's on the high school, collegiate or NBA level.

"Right now, it's you but the best part of this is being around your teammates. That's what's going to help you get through those tough times. Being away from us or hanging in the training room or not coming to the games or not traveling on the road, you start to feel empty and alone and by yourself. When you're around your teammates all the time, now you still feel like you're still a part of the group and he is."

Outlook: Michigan has won eight of nine in the series between the teams and seven straight meetings at Crisler Center…For Penn State, Lamar Stevens leads four players averaging double figures in scoring with 16.6 points. The Nittany Lions lead the Big Ten in steals (8.6) and blocks (3.1) per game, and are 0-3 on the road in conference play.