Michigan coach Ed Warinner happy to have son on his team

Edward Warinner was the No. 2-ranked inside linebacker in Ohio as a senior. He signed with Michigan State in 2018 and played briefly in 2019.

Michigan coach Ed Warinner happy to have son on his team

Perhaps any other player might have caused a bigger stir transferring from Michigan State to in-state rival Michigan, but when linebacker Edward Warinner made the move from the Spartans to Wolverines, the needle didn’t move much.

After all, his father, Ed Warinner, is now entering his third season as the Wolverines’ offensive line coach, so a son transferring to be closer to his dad was not exactly earth shattering.

“It was one of those things he approached me about,” Ed Warinner said last week at the Michigan High School Football Coaches Association clinic in Lansing. “We talked about it and made sure that’s what he wanted to do. Talked to (Michigan coach) Jim (Harbaugh) about it and off we went.”

Warinner entered the transfer portal earlier this month and will have three years of eligibility. He will have to sit out this season unless he decides to pursue a waiver for immediate eligibility.

He was three-star recruit out of Olentangy Liberty in Ohio and was the No. 2-ranked inside linebacker in the state. Warinner enrolled early at Michigan State in 2018 and went through spring practice, and the 6-foot, 229-pounder redshirted that season. He appeared in seven games last season and had three tackles primarily playing on special teams.

Ed Warinner said he and his wife, Mary Beth, are overjoyed Edward, their youngest, will be in Ann Arbor. He began classes earlier this month at Michigan and is taking part in winter conditioning that officially began last Thursday with the team. 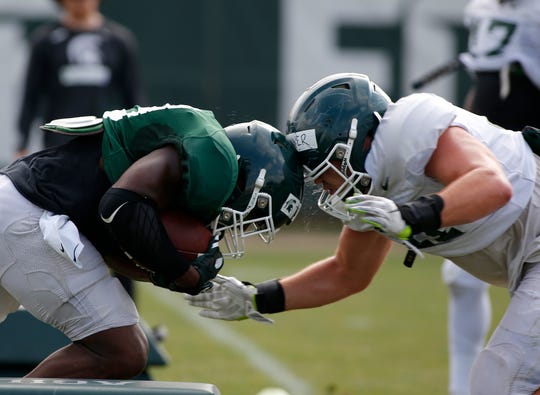 “It’s great because I love him, and he loves football, and I get to be around him,” Ed Warinner said. “I get to see his games, see him play in person. I didn’t get to see a lot of games in high school since every time they play on Friday night, and we’re on the road, you don’t see your son play.”

Now, father and son will be together all the time.

“Otherwise I’d go to one game a year, the one that we’re trying to beat him,” Ed Warinner said, smiling.