Michigan's Isaiah Livers hobbled by twisted ankle, will be a game-time decision vs. Rutgers

The junior forward sustained the injury in the second half when Indiana's Justin Smith fell on his lower left leg.

Michigan's Isaiah Livers hobbled by twisted ankle, will be a game-time decision vs. Rutgers

But after twisting his ankle in the second half of Sunday’s win against Indiana, the junior forward is optimistic the latest ailment won’t keep him off the court. 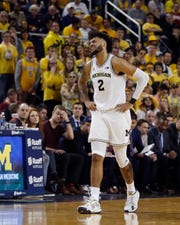 "It's definitely looking positive,” Livers said when asked on Big Ten Network’s “The B1G Show” Monday if he’ll be able to play at Rutgers on Wednesday.

“With my competitiveness, I want to get out there and play. I'm just going to wait for what the trainers say and coaches say. But to me, honestly, with how I'm walking around I'm kind of pain-free, so I should expect to be out there Wednesday for sure."

The injury occurred with 13:45 remaining in the game when Indiana’s Justin Smith fell into the back of Livers’ lower right leg after the two scrambled for a loose ball following a blocked shot by senior center Jon Teske.

Livers immediately grabbed at his right ankle and limped off the court. After going back to the locker room for further evaluation, he eventually returned to the bench and briefly checked back into the game with 7:54 left.

"I'm good. I've been just doing my rehab,” Livers told BTN. “Everything looks fine. We're just waiting for results to come in, but I feel fine for the most part.”

Coach Juwan Howard said Tuesday that Livers will be traveling with the team to Rutgers and will be a game-time decision.

“I hope Isaiah is out there tomorrow,” Howard said. “But right now, we just want to manage and see how he's feeling today and tomorrow. We'll make a decision from there.”

Livers has missed nine games this season with lower-body injuries. Michigan (16-9, 7-7 Big Ten) is 4-5 without him in the lineup.

He missed six games after suffering a left groin injury on Dec. 21 against Presbyterian. He missed three more games after bothering his hip flexor and groin area on Jan. 25 against Illinois.

Given the array of injuries he has endured, Livers said he doesn't expect he'll be at 100 percent "for a while."

"During the season, you've got two, three games a week," Livers told BTN. "You've got (Big Ten and NCAA) tournaments coming up. It's going to be real tough to get back to 100 percent."

However, this is not the first time Livers has dealt with an ankle injury. He suffered an ankle sprain his freshman season that forced him to miss a game and missed a stretch of preseason practices with a similar injury his sophomore year.

“No matter what, with a player and their injuries, we're always going to be very smart about the situation, treat with it precaution and make sure that we take care of the player's best interest,” Howard said. “His health is No. 1. All players, regardless of a game when it comes to wins and losses, I'm always concerned about that player's health."

Outlook: Zavier Simpson needs four more assists to become the first Wolverine to reach 200 in a season twice in a career…Michigan is 12-0 in the all-time series and is 5-0 in Piscataway…Rutgers is 17-0 at home this season and ranks second in the Big Ten in field-goal percentage defense (37.9 percent), scoring defense (61.7 points) and rebounds per game (40.5).