With junior guard Eli Brooks out with a broken nose, No. 19 Michigan deployed a new starting lineup. 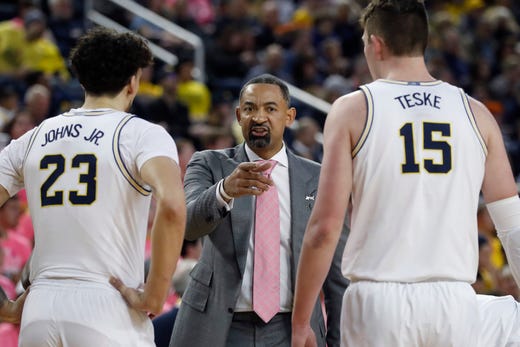 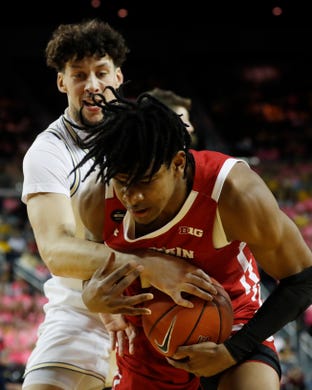 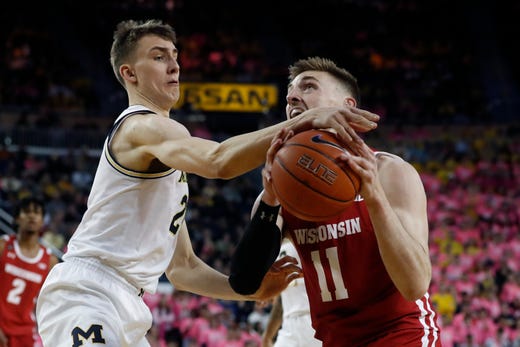 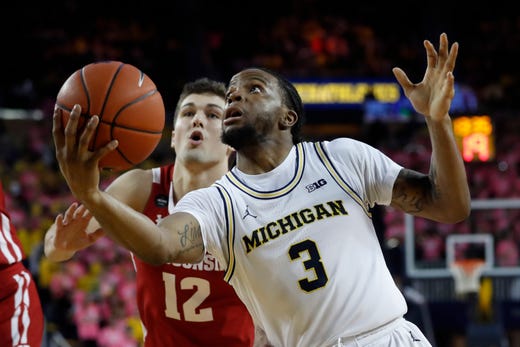 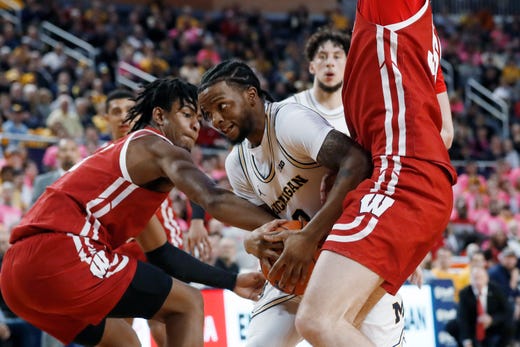 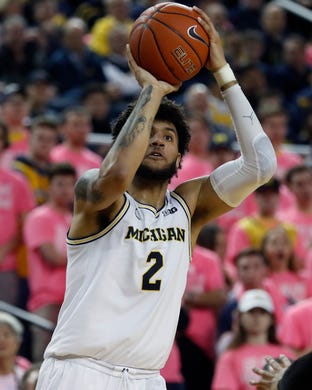 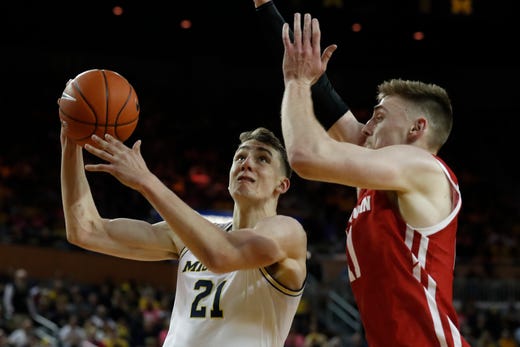 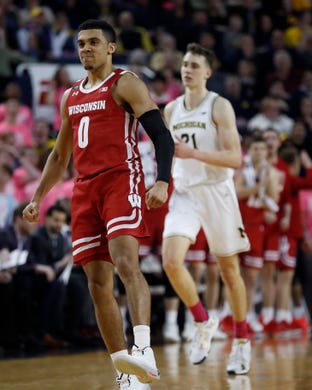 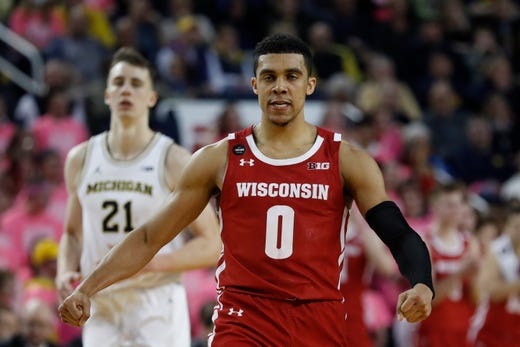 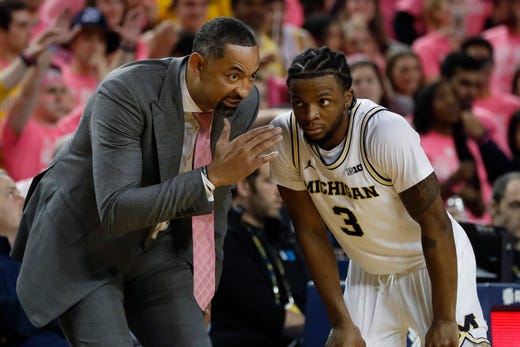 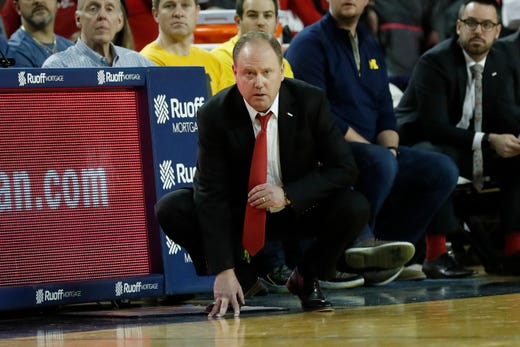 The experiment didn’t go so well, especially on defense, as Michigan saw its five-game win streak come to an end Thursday with an 81-74 loss to Wisconsin at Crisler Center.

Simpson finished with a career-high 32 points on 14-for-22 shooting for Michigan (18-10, 9-8 Big Ten). He added six assists and five rebounds as Wisconsin made him more of a scorer than a facilitator.

Wagner added 17 points and seven rebounds for the Wolverines, who trailed the entire game and by as much as 14. They made a late run and pulled within three twice in the final three minutes before the comeback attempt fell apart.

"We did a very bad job of defending on the perimeter,” Michigan coach Juwan Howard said. “Overall, our defense did not get it done for us. Huge letdown from our entire team as far as how we were defending. Poor job from me on preparing our guys. I'll take it. I'll own. I didn't prepare them well enough."

After a rough showing in the first half, Michigan stuck with the big lineup at the start of the second half and the move initially paid off. The Wolverines opened with an 8-0 burst that was keyed by Simpson, chopping Wisconsin’s lead to 43-41 with 16:57 to play.

The Badgers answered with a 16-4 run and a flurry of 3-pointers. Ford canned a deep ball to put Wisconsin back up double digits and Tyler Wahl drained another long-range shot to push the lead to 59-45 at the 12:09 mark

The Wolverines went to a more traditional lineup with Simpson and sophomore David DeJulius and managed to shave the deficit to six. But Trice delivered another 3-pointer and finished a reverse layup to make it 70-60 with 4:41 remaining. 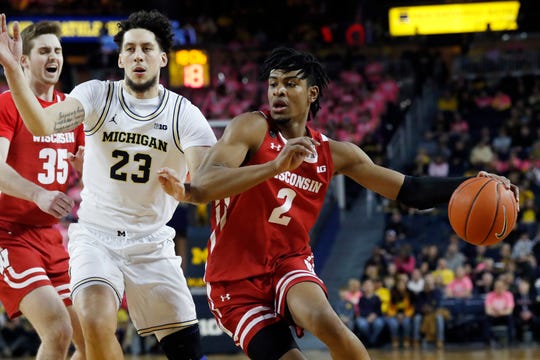 Michigan went even smaller with Johns at the five and it led to another late push. Simpson scored on a driving layup to cap a 7-0 spurt and cut it to 70-67 at the 3:02 mark.

"I was searching for answers,” Howard said of the late lineup changes. “I thought that would give us a better opportunity of how they were basically carving us up when we had Jon in the game, we had Austin (Davis) in the game. They were able to get anything they want. I'm not saying it was based just on those bigs. Everyone didn't do a good job defensively.”

Once again, Trice came up with a response. He quelled Michigan’s momentum with another killer 3-pointer out of a timeout to give Wisconsin more breathing room.

Trice finished with 28 points and five made 3-pointers. Potter and Ford each scored 18 as the Badgers made at least 11 3-pointers for the fifth straight contest and held the Wolverines to 3-for-10 shooting from deep.

"To be able to answer runs like we did in the second half and be able to close it out, really proud of my group of young men,” Wisconsin coach Greg Gard said.

“We've been in that situation before where teams have made runs. Just calm down. They made their run now it's time for us to punch back. Credit goes to our players for responding. We came right back and answered what they were doing. We were able to counter back.”

Thursday marked the first time this season Michigan rolled out the lineup with Simpson, Wagner, Livers, Johns and Teske. Howard said he didn't start DeJulius over Johns because wanted to avoid the possibility of DeJulius and Simpson each getting into early foul trouble.

"They're our two primary ball-handlers," Howard said. "If both get one quick foul, then we're in trouble. I tried to do my best to balance out their minutes and stagger it some type of way so if anybody got into foul trouble I could always have one of our guys to be able to quarterback our team and lead us and get us organized offensively."

However, the Wolverines were out of sorts and looked completely lost on defense, particularly when it came to switching screens against Wisconsin’s three-guard lineup. The Badgers scored at will as they made eight of their first nine shots, including their first three attempts from 3-point range, and jumped out to a 19-9 lead with 14:40 left in the first half.

"With a lot of big bodies out there, you should take advantage of that on both ends of the floor. We didn't do that," Wagner said. "We wanted to switch a lot. We don't talk. Nobody really knows who to guard. That's how they got their shots. I think they really just scored off our mistakes, especially in the first minutes. Then once they had a rhythm they made some tough ones."

Michigan didn’t roll out two guards until roughly eight minutes into the game and used a 6-0 spurt to cut the deficit to 24-22 at the 9:09 mark.

But Wisconsin pulled away as Michigan’s defensive struggles and search for an effective rotation continued. Brevin Pritzl drained a jumper to cap a 12-0 run and put Michigan in danger, 36-22, with 4:08 left in the half.

Teske stopped the spurt with an offensive tip-in and Simpson scored four baskets down the stretch, including a fast-break dunk. But it barely put a dent in the deficit as the Badgers took a 43-33 lead into halftime and the Wolverines turned in arguably one of their worst defensive halves of the season.

“They move very fast and move a lot on offense,” Wagner said. “I think we didn't talk the way we wanted to or prepared for it. They made us pay early on. They were ready from the jump and we weren't."