'A win-win': Isaiah Livers to be evaluated for NBA Draft, could return to Michigan

Michigan’s Isaiah Livers is going to dip his toes in the NBA Draft waters.

'A win-win': Isaiah Livers to be evaluated for NBA Draft, could return to Michigan

Isaiah Livers is going to dip his toes into the NBA Draft waters.

The Michigan forward announced on Monday he will enter his name into the draft and explore his options while maintaining his eligibility to return for his senior season.

“It's a beautiful opportunity that the NBA created, testing the waters,” Livers said on a teleconference call with reporters. “It’s an opportunity for players to show teams what they got and to get evaluated, get some feedback…It's a win-win for me.” 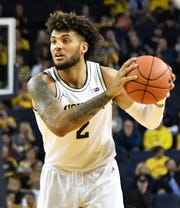 According to Livers, this was his plan all along. He had conversations with his father and mentors before the season started and he knew he was going to test the draft waters “no matter what” this offseason, regardless of how his season went.

Livers said he’s an “open book” and will be entering the pre-draft process with an open mind. He noted he isn’t leaning one way or the other toward staying in the draft or coming back to Michigan.

“I want to keep both doors open. I want to have the door to keep my name in the draft or the door to keep my eligibility,” said Livers, who doesn’t plan on hiring an agent. “I definitely went with the option to keep my eligibility just because if things don't work out and they (NBA teams) say I need another year of school or it'd be really good if I go back to school for one more year, I don't have a problem with it.

“It's successful either way because I can get my education and my diploma and then declare for the draft next year. Or if they like what they see right now, I can easily keep my name in the draft. It's good to have two options.”

Livers led the Wolverines with 12.9 points per game — which is five more points than he averaged as a sophomore — while shooting 40.2 percent from 3-point range and 95.7 percent at the free-throw line. He also averaged a career-high four rebounds and 1.1 assists as one of Michigan’s most versatile pieces.

He started all 21 games he was healthy but missed 10 games due to lower-body injuries to his groin, hip and right ankle. Livers had a rough close to the season after returning from the ankle injury, shooting 32.8% from the field (25% on 3-pointers) over the final five games, before the postseason was cut short due to the coronavirus pandemic.

The current health crisis has cast a cloud of uncertainty over the entire pre-draft process, which includes workouts, interviews and testing. The COVID-19 outbreak has already suspended the NBA season and it’s unclear how it will affect the rest of the league’s events, including the draft combine (May 21-24) and draft (June 25).

While the global virus may limit Livers’ pre-draft opportunities, he hopes he’ll at least get the chance to work out in front of a team.

“I'm not going to be ungrateful here and talk about I wish they would have the combine, the workouts so I could show them what I got,” Livers said. “We have a whole thing going on in the world right now that needs to be taken care of before any of that is even thought of. I'm fully aware of what may happen and I'm just preparing myself for whatever decision they make."

For now, Livers is back home doing some light rehab and taking advantage of the time off his feet to heal up.

Livers said he hasn’t received any feedback regarding his potential draft stock yet, but he expects to in the next few days now that he has declared. He’s ranked No. 100 on ESPN’s Top 100 draft prospects list and his name hasn’t appeared in any recent two-round mock drafts by major outlets.

Livers has already had conversations with former teammates Jordan Poole, Ignas Brazdeikis and Charles Matthews, who all went through the pre-draft process last year. He has also been leaning on coach Juwan Howard for advice.

“He knows how the NBA works and he knows if I'm prepared or not by the feedback he'll get. I'm taking his feedback 100 percent into (account).”

The biggest factor, though, will be the evaluations he receives from NBA teams. Livers said he will take into consideration where he would get drafted but doesn't have a specific range in mind.

As it stands, Livers will have until June 3 — the NCAA’s withdrawal deadline is 10 days after the combine — to make up his mind. Whether he stays or goes, though, Livers said it will to be a “tough decision however it plays out.”

"I would always love to come back for another year at Michigan," Livers said "If they (NBA teams) like what they see and teams are literally saying they're going to draft me, then I'm pretty sure that I'm going to stay in the draft. It's basically whatever the evaluations and feedback, however that comes, is basically how I'll make my decision."