The dominoes continue to fall as Michigan’s 2020-21 roster continues to evolve.

The dominoes continue to fall as Michigan’s 2020-21 roster continues to evolve.

Late Wednesday night, sophomore Colin Castleton became the second Wolverine this week to enter his name into the transfer portal and will look to finish his career elsewhere.

Castleton served as a backup big man this past season and appeared in 25 games. He averaged 3.1 points and 2.4 rebounds in 7.9 minutes off the bench while splitting time at the center and power forward positions. 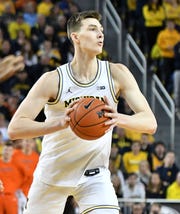 Castleton saw at least 12 minutes of action in four of the first five games, but his role diminished as the season wore on. Once Big Ten play resumed after the new year, Castleton was passed by redshirt junior Austin Davis as the backup center and was a healthy scratch in six of the final 14 regular-season games.

While Castleton could still return to Michigan, he’s likely looking to go somewhere with a clearer path to playing time. The 6-foot-11, 235-pound forward was going to have to contend with Davis and incoming freshman Hunter Dickinson for minutes at the five as well as junior-to-be Brandon Johns Jr. and incoming freshman Isaiah Todd in smaller lineups. And that doesn’t even include Isaiah Livers, who could still return for his senior season.

Castleton, a former four-star prospect, was part of Michigan’s 2018 five-man recruiting class and signed with the Wolverines over Illinois, Florida and Xavier. He’s the second member of that class to enter the transfer portal, joining guard David DeJulius, who put his name in on Monday.

Castleton and DeJulius played sparingly as freshmen under former coach John Beilein, showed glimpses of their potential last season and will be leaving before they got the chance to fully blossom. They both will have two seasons of eligibility remaining.

In addition to the departures of Castleton and DeJulius, incoming freshman Jace Howard, coach Juwan Howard's son, will reportedly be joining the team next year as a walk-on and won’t count toward the scholarship limit.

That means the Wolverines are sitting at 11 scholarships for the 2020-21 season — with seven returning players and four incoming freshmen — and have two available scholarships at their disposal.

Michigan has been pursuing two Ivy League point guards on the graduate transfer market — Harvard’s Bryce Aiken and Columbia’s Mike Smith — and is in the running to land five-star guard Joshua Christopher.