Isaiah Todd on skipping Michigan for G League: ‘It was irrefusable’

Isaiah Todd on skipping Michigan for G League: ‘It was irrefusable’

Jalen Green is not alone. The NCAA soon might be.

Five-star high school basketball recruit Isaiah Todd recently decommitted from Michigan to follow in Green’s footsteps and take part in the NBA’s new one-year professional pathway program. The two will play on the same team and train together in preparation for the 2021 NBA Draft with access to NBA veterans and trainers. 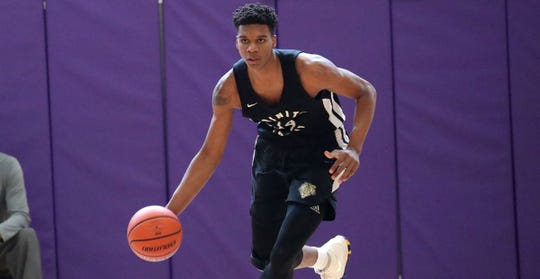 They will do this instead of playing in the NCAA for one year. Odds are strong that more elite high school recruits will follow in the years to come.

“For a long time, I was just always focused on going to college and being under (Michigan head coach) Juwan Howard, but two weeks ago when I got the call from the G League, it was kind of irrefusable,” Todd told Janerika Owens in an Instagram Live interview on Wednesday. “The dream has always been to go to the NBA, the dream has always been to play in the NBA, and when they called me, they were telling me I was going to be under the NBA, and just training for the draft. That’s a kid’s dream right there.”

Todd said the NBA had come to him with an offer in the past that he had brushed off, but the G League’s new offer is hard to turn down. It’s unclear what Todd’s pay will be, but Green will make $500,000 for his one year under the NBA umbrella. The two will play on a team with several NBA veterans and compete against G League teams, foreign national teams, and NBA academies, according to ESPN.

The only other league comparable to the NBA’s professional pathway program is in Australia, where top 2020 NBA Draft prospects LaMelo Ball and RJ Hampton spent their season this year.

“I automatically thought about being a pioneer, being one of the first to do this, and just being able to put myself out there with some pros and prepare myself for the NBA,” he told Owens.

Todd, a 6-10 forward from Richmond, Va., was a member of the Team USA FIBA U16 team that won gold in 2017. He understands that the professional pathway program isn’t for every basketball player, but for those highly touted like himself and Green, it’s a no-brainer.

“It’s different for everybody, but for guys that have similar situations to myself and Jalen, they feel like they can bypass college and prepare themselves for the draft, this would be a more clear way to do that instead of going to school maybe for one year,” Todd told Owens. “Even though they may be able to go back and go to school, even this route they allow us to do online classes while we’re preparing for the draft, so we’re not really missing out on any college experience.”