The dog days of the Michigan offensive line were not that long ago.

The dog days of the Michigan offensive line were not that long ago. 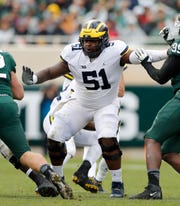 Michigan’s previous high was two offensive linemen taken, most recently in 2014 (Taylor Lewan and Michael Schofield). The Wolverines had 10 players selected in the three-day draft, tying the second-highest total for the program. There were 11 taken in 2017.

“We’re always being put in good positions to succeed on the field and off the field, and we’re pro-ready,” Onwenu told reporters after his selection.

Enter offensive line coach Ed Warinner, who saw all five of his offensive line starters on the 2013 Ohio State Big Ten championship team become rookie starters in the NFL. He has been an asset for Michigan since his arrival in early 2018, immediately simplifying the scheme and instilling a level of confidence that had been absent.

Warinner, since 2007, has had 19 of his offensive linemen drafted, including the four Michigan players in the recent NFL Draft, with seven becoming rookie starters.

What a group. @4Warinner

During an interview with Saints reporters after Ruiz, who had a year of eligibility remaining, was selected, Warinner said he told a friend two years after spring football that Ruiz would be a first-round pick. That friend texted him Thursday after the first round to remind him of that prophecy.

“He just has all the attributes you’re looking for,” Warinner told reporters. “There’s really nothing he can’t do that they’re going to be looking for him to do in terms of the job descriptions of an interior offensive lineman, center or guard, and he’s played both positions at the highest level.

“His football IQ is as high as I’ve been around in a college football player, so I don’t think he’ll have any trouble being ready to go. I feel good about that.”