Last month, the Wolverines appeared to have a roster that was overcrowded with nine returning scholarship players and a five-man 2020 recruiting class. But within a matter of weeks, that all changed. 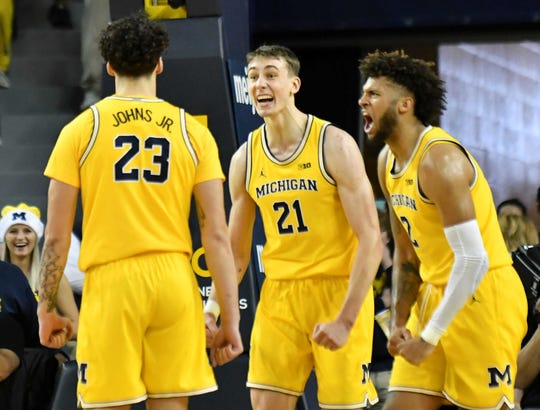 Brandon Johns Jr. (23), Franz Wagner (21) and Isaiah Livers (right) all could be back next season for Michigan, with Livers still contemplating a jump to the NBA. (Photo: Robin Buckson, Detroit News)

And just like that, Michigan went from being over the 13-scholarship limit to having two open scholarships for the 2020-21 season, assuming forward Isaiah Livers withdraws his name from NBA Draft consideration.

Coupled with the graduation of guard Zavier Simpson and center Jon Teske and the addition of Columbia graduate transfer Mike Smith, Howard will have plenty of different pieces to work with in his second year at the helm.

While it’s possible another new face could be added to the mix — DePaul grad transfer Jalen Coleman-Lands named Michigan among his five finalists on Friday — here’s an early projection of how Michigan’s rotation could shake out as the dust starts to settle.

►Mike Smith, guard, fifth-year senior: The 5-foot-11 dynamo averaged 22.8 points on 19.3 shot attempts per game last season at Columbia and proved he can score against high-major competition, tallying 23 points at Wake Forest, 20 points at St. John’s and 16 points at Virginia. However, Smith won’t be relied upon to shoulder the offensive load at Michigan as he transitions from the Ivy League to the Big Ten. With other capable scorers around him, Smith will need to be more of a distributor who will be able to pick and choose his spots to put up shots.

►Eli Brooks, guard, senior: Brooks was arguably the most improved player last year as he moved into a full-time starting role at the two position. He’s a solid perimeter defender and the next step is to become more of a consistent scoring threat. While he’ll stay in the starting lineup, it remains to be seen which guard spot he’ll play. After missing out on five-star guard Joshua Christopher and losing DeJulius, Howard’s pursuit of George Mason grad transfer Justin Kier and Coleman-Lands is a sign Howard isn’t entirely comfortable with his backcourt options. If Michigan lands a guard who can play the two, Brooks could slide to point guard and Smith could be moved to the bench.

►Franz Wagner, wing, sophomore: The German product announced last month that he was passing on testing the NBA Draft waters to return for his second year in Ann Arbor. If Wagner is able to pick up where he left off last season — he averaged 15.9 points and 6.4 rebounds over the final seven games — he could put himself in the conversation for All-Big Ten and All-American selections. He also seems poised to serve as the driving force of the team, much like his older brother, Moritz, did during the 2017-18 campaign.

►Isaiah Livers, forward, senior: The most important remaining roster decision centers around Livers, who was on his way to having a breakout season last year before he was hampered by a string of lower-body injuries. If he returns, Michigan would boast one of the top wing-forward combos in the Big Ten — health permitting. If he leaves, the Wolverines will be dealt another brutal blow and left to find a way to replace his production.

►Hunter Dickinson, center, freshman: The 7-foot-2 big man appears to have a leg up on Austin Davis for the starting center job. Davis had right shoulder surgery last month and a timetable for his return has been set for early October. Depending on Davis’ recovery process, Dickinson will have the entire offseason and possibly a portion of preseason practices to improve his standing for the lead role. And even though it typically takes big men more time to develop at the next level, Howard has shown he likes to get the ball into the post and Dickinson is a big target on the block.

Michigan forward Austin Davis will be back for a fifth season. (Photo: Robin Buckson, Detroit News)

►Austin Davis, center, fifth-year senior: Regardless if he starts or not, Davis figures to play a prominent role in the rotation when he fully recovers from his shoulder surgery. Last season he showed he can efficiently finish around the rim and effectively defend in the post without fouling — an area he struggled with two seasons ago. While he has more experience and likely knows how to use his body better than Dickinson, it’s possible the two could split the minutes at the five until one of them emerges as the top option.

►Brandon Johns Jr., forward, junior: Johns was one of Michigan’s key reserves last season, and that label won’t change as long as Livers returns. If Livers comes back, Johns once again will serve as the bench piece who can be inserted in for Livers or Wagner. If Livers leaves, Johns will replace him the lineup like he did 11 times last season. Overall, Johns’ versatility will be much-needed and his prior experience playing at the five could come into play.

►Adrien Nunez, guard, junior: If Michigan needs anyone to take a giant leap next season, it’s Nunez. His 3-point shooting (25.6% on 43 attempts) and defense left a lot to be desired, and those shortcomings were reflected in his playing time. The expectation is he learned from all the trials and tribulations and he’ll be ready to prove it because the Wolverines aren’t flush with backcourt depth.

►Zeb Jackson, guard, freshman: Jackson spent a year playing on an uber-talented roster at Florida prep powerhouse Montverde Academy to help prepare him for the next level. Even though he likely will spend much of his time off the ball, he’ll still have a chance to earn a backup role as the first guard off the bench. However, he’ll have ground to make up against Nunez, who already has a year of playing for Howard under his belt.

►Terrance Williams, forward, freshman: The extent of Williams’ role will hinge on Livers’ draft decision. With Livers, Wagner and Johns all in the fold, Williams, a 6-foot-7 tweener who can be deployed at the three and four positions, could see a limited amount of minutes trickling down. But if Livers makes the jump to the NBA, Williams will need to step in and step up right away for the Wolverines.

►Jace Howard, wing, freshman: Howard, Juwan’s son, figures to be the low man on the totem pole when it comes to scholarship players. At 6-foot-7, he’ll be vying for playing time at a position where there won’t be an abundance of minutes up for grabs. That, of course, could change in the event of an injury or foul trouble.

►Brandon Wade, guard, junior; Rico Ozuna-Harrison, guard, senior; C.J. Baird, forward, senior; Luke Wilson, guard, senior; Jaron Faulds, forward, senior: While most of their appearances come late in games, Howard has shown he’s not afraid to put in a walk-on depending on the matchup. For example, he inserted Baird for a first-half stretch at Nebraska last season. Wade and Faulds were both former scholarship players — at Duquesne and Columbia, respectively — and could potentially serve a need, with Wade being utilized as a ball-handler and distributor and Faulds as a third big man.