Michigan appears to be in the mix for another veteran guard on the transfer market.

Wake Forest transfer Chaundee Brown added the Wolverines to his list of possible destinations on Wednesday, according to a report from UM Hoops. Brown initially named Iowa State, Illinois, Gonzaga and LSU as his finalists in late April. 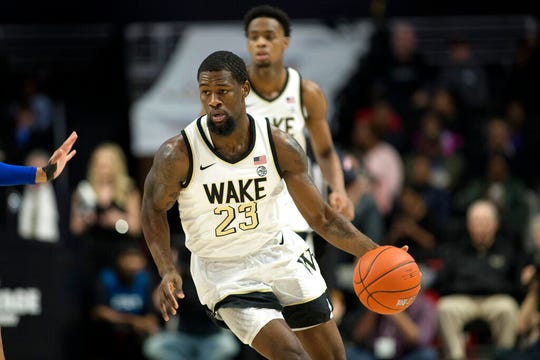 Coming out of high school, Brown was ranked the No. 36 overall recruit in the 2017 class by the 247Sports composite. He chose the Demon Deacons over offers from Kansas, Florida and Maryland.

More: Breaking down the 2020-21 Michigan basketball roster as it stands right now

Brown has one year of eligibility remaining and would likely have to sit out next season unless he receives a waiver. He entered the transfer portal last month before Wake Forest fired head coach Danny Manning.

Michigan’s backcourt lacks depth after a combination of departures and recruiting misses this offseason. David DeJulius, who served as a first guard off the bench last season, transferred to Cincinnati; Cole Bajema, a reserve guard who played sparingly as a freshman, entered the transfer portal last week; and Josh Christopher, a five-star guard from California, committed to Arizona State over Michigan.

The Wolverines have two scholarships available for the 2020-21 season. In addition to Brown, the Wolverines are also in play for DePaul grad transfer Jalen Coleman-Lands, another guard and former top-40 recruit.