Veteran coach believes connecting to players through video conferencing like Zoom will be a valuable tool used well after pandemic has passed. 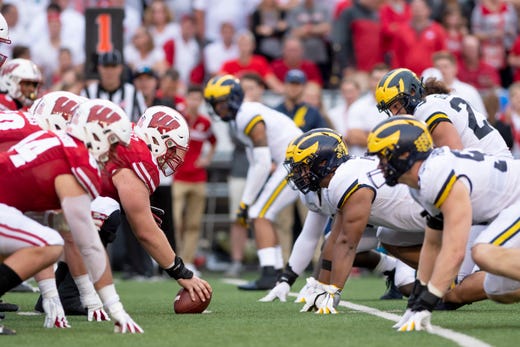 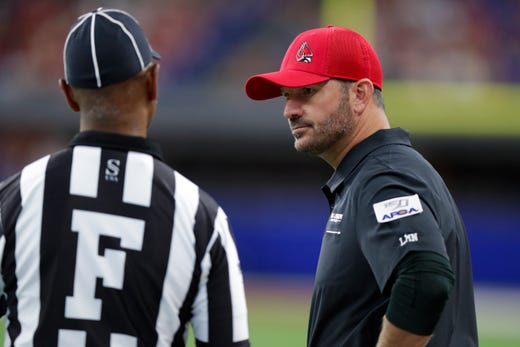 Sept. 12, vs. Ball State (5-7, 4-4 MAC in 2019): In the easiest game on the schedule, Michigan should roll. Ball State coach Mike Neu (pictured), entering his fifth season, helped his team put up impressive numbers on offense in 2019, 34.8 points per game and 463 yards per game, but graduated key pieces from last season on the offensive line and in the offensive backfield. Expect Michigan’s offense to feast on a below-average defense. Prediction: Win Michael Conroy, Associated Press
Fullscreen 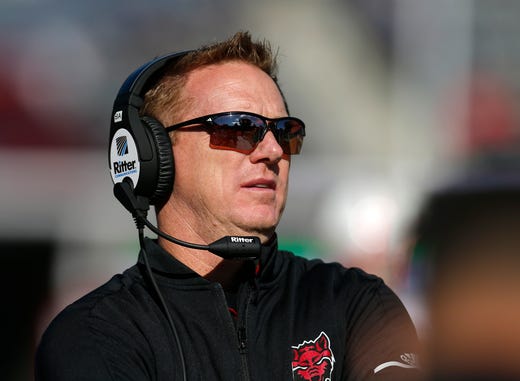 Sept. 19, vs. Arkansas State 8-5, 5-3 Sun Belt in 2019: The Sun Belt West is not exactly the most feared division in college football, but Arkansas State was able to finish second in the West Division in 2019, and coach Blake Anderson (pictured) has been able to take his team to a bowl game for all six seasons that he’s been at Arkansas State. His team wasn’t spectacular on either side of the ball in 2019, just solid. None of that should matter — Michigan’s the far superior team. Prediction: Win Rick Scuteri, Associated Press
Fullscreen 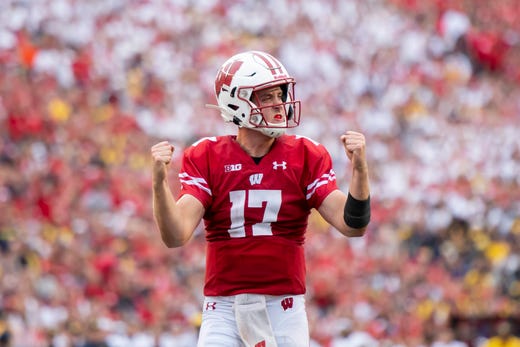 Sept. 26, vs. Wisconsin (10-4, 7-2 Big Ten in 2019): This game is setting up to be close. Wisconsin didn’t lose a ton from a very good defense last season, and will probably stroll into Ann Arbor with good experience at quarterback if senior Jack Coan (pictured) beats redshirt freshman Graham Mertz for the starting job. Coach Paul Chryst hasn’t won in two tries at Michigan and needs to replace two-time Doak Walker Award-winner Jonathan Taylor, but when was the last time Wisconsin wasn’t able to field a great running back? Prediction: Loss David Guralnick, Detroit News
Fullscreen 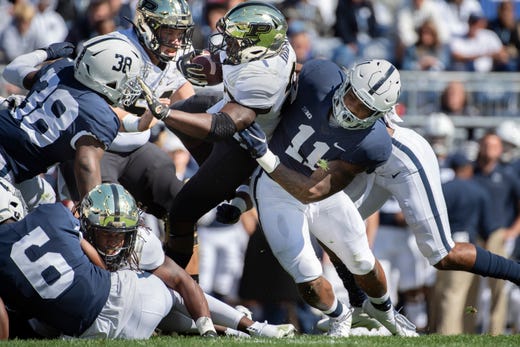 Oct. 3, vs. Penn State (11-2, 7-2 Big Ten in 2019): Coach James Franklin has been recruiting very well at Penn State, and last season’s two-loss team returns 13 starters on offense and defense combined. Accounting for Penn State All-American Micah Parsons (pictured) at linebacker will be a big test for Michigan’s inexperience at quarterback and on the offensive line. No matter who wins, it will be a nail-biter in Ann Arbor. Prediction: Loss Barry Reeger, Associated Press
Fullscreen 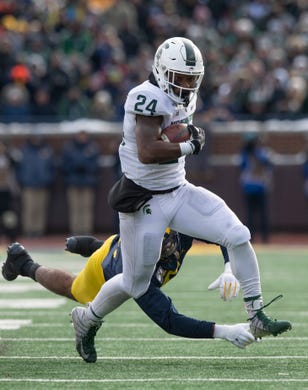 Oct. 10, at Michigan State (7-6, 4-5 Big Ten in 2019): On paper, this game looks like a Michigan win, but that has been said many times in this series with different results. If one of coach Jim Harbaugh’s top lieutenants, defensive coordinator Don Brown, can devise a scheme to stop Michigan State running back Elijah Collins (pictured), it’s unlikely new Michigan State coach Mel Tucker will be able to find anything else on offense. Especially in Tucker’s first season, Harbaugh has enough to win this one on the road. Prediction: Win John T. Greilick, Detroit News
Fullscreen 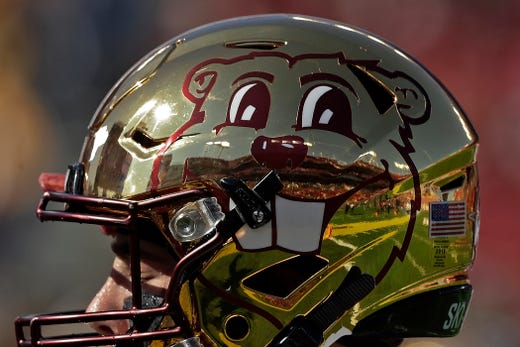 Oct. 17, at Minnesota (11-2, 7-2 Big Ten in 2019): It might feel like ancient history at this point, but the last time Michigan played at Minnesota it took a desperate goal-line stand to get Harbaugh his sixth victory as Michigan coach. That was back in 2015, and a lot has changed for Minnesota since that Halloween night in Minneapolis. Former Western Michigan coach P.J. Fleck is entering his fourth season as Minnesota’s head man, the recruiting has picked up significantly, and Minnesota is fresh off a two-loss season in which it won a share of the Big Ten West title. Prediction: Loss Chris O'Meara, Associated Press
Fullscreen

Oct. 24, vs. Purdue (4-8, 3-6 Big Ten in 2019): Coach Jeff Brohm’s win totals at Purdue, starting in 2017 when he was hired away from Louisville: seven, six, four. 2018 did include a win against Ohio State, and injuries have taken their toll, but the overall trajectory of Brohm’s program must be concerning for Purdue fans, even if about three losses is the historical ceiling in West Lafayette. Defensive end George Karlaftis (pictured) will test Michigan’s young offensive line, but Harbaugh’s squad will get it done at home. Prediction: Win Michael Conroy, Associated Press
Fullscreen 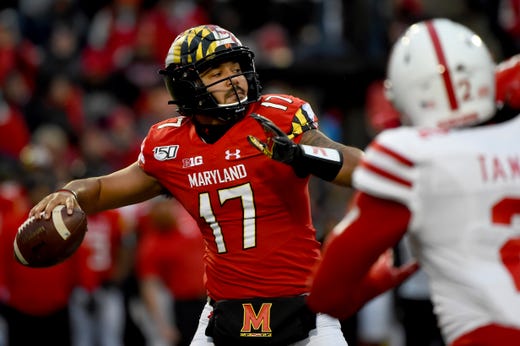 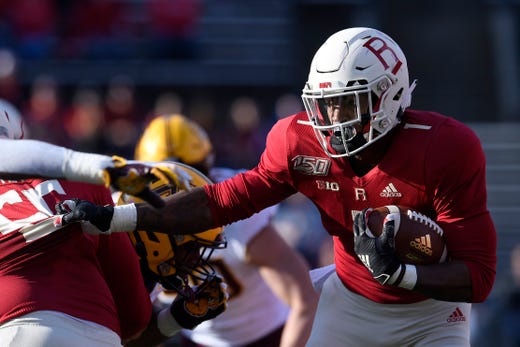 Nov. 14, at Rutgers (2-10, 0-9 Big Ten in 2019): Rutgers will try to target Michigan’s defensive tackles with its run game. Junior running back Isaih Pacheco (pictured) had three games with 100 or more rushing yards in 2019 for Rutgers, including 102 yards against Penn State, and represents Rutgers’ best hope on offense. Greg Schiano is back as coach after leading Rutgers from 2001 to 2011, including a seven-season stretch when he took the team to six bowl games. Prediction: Win Sarah Stier, Associated Press
Fullscreen 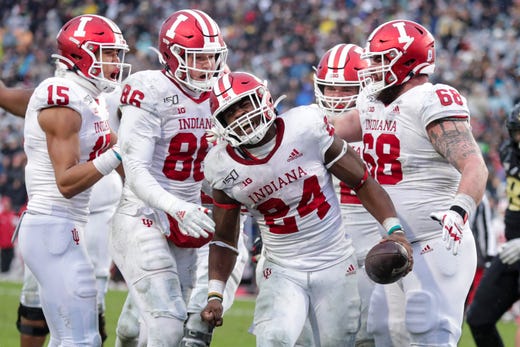 Nov. 21, vs. Indiana (8-5, 5-4 Big Ten in 2019): Quarterback Peyton Ramsey, offensive lineman Coy Cronk and six other Indiana football players have hit the transfer portal in 2020. Last season was the best in Bloomington since the early ‘90s, but coach Tom Allen has lost too much off that team to challenge the best teams in the Big Ten. An interesting subplot to this game will be the performance of Indiana’s new offensive coordinator, 31-year-old Saline native and former Michigan quarterback Nick Sheridan. Prediction: Win Michael Conroy, Associated Press
Fullscreen 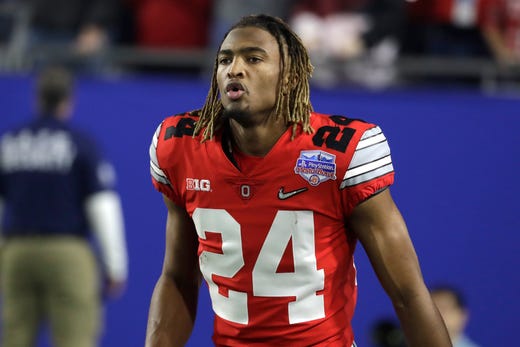 Nov. 28, at Ohio State (13-1, 9-0 Big Ten in 2019): By this point in the season, Michigan better hope it has a quarterback capable of handling The Game in Columbus. Ohio State has been a defensive back factory under coaches Urban Meyer and Ryan Day, and junior cornerback Shaun Wade (pictured) looks like the next in line. Harbaugh gave Ohio State a run for its money on the road in 2016, but 2020’s Michigan squad won’t be as good as 2016’s, and Ohio State’s 2020 team will probably be better than 2016’s College Football Playoff qualifier. Prediction: Loss. Michigan’s regular-season record prediction: 8-4, 5-4 Big Ten Rick Scuteri, Associated Press
Fullscreen

Coaching football is a lot about being hands-on with players while teaching during practices, but coaches across the country in every sport have had to expand their virtual horizons to keep college athletes engaged and focused on preparing for the upcoming season, whenever that might be.

Michigan defensive coordinator Don Brown, 64, and offensive coordinator Josh Gattis, 36, both have had to embrace video conferencing, something neither had ever done. But that was the only way to work with their current players, who missed out on spring practice when on-campus activities were suspended March 12 in response to the COVID-19 pandemic, and to recruit high school players. 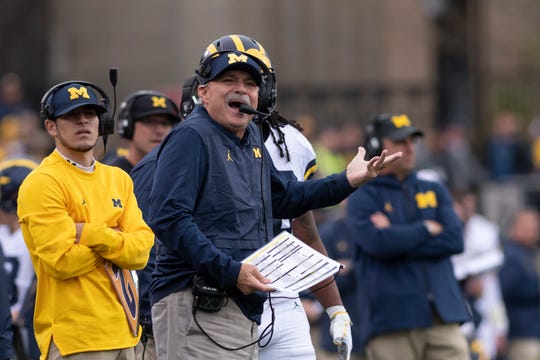 “I’ve become a Zoom magician,” Brown said in a Zoom conference with reporters on Thursday. “I’ve been able to finagle my way.”

“This has created a new platform for being able to teach, and so I know we're excited and we're thankful that we've been introduced into this new platform to be able to use.”

While the pandemic forced coaches and players to get creative when it comes to meetings and workouts and even keeping up with their nutrition plans, it appears the day for a return to the building in a limited nature could happen soon.

The NCAA has voted to allow voluntary on-campus athletic activity for football, and men’s and women’s basketball to begin June 1. Ohio State announced this week football players can return to campus for voluntary workouts beginning June 8, and the Southeastern Conference announced Friday that voluntary activity, “under strict supervision,” can begin at their member schools also on June 8.

It is unclear when Michigan might return.  The state is under a stay-at-home order through June 12, but gyms will have to be given the all-clear to reopen by Gov. Gretchen Whitmer before players can return to work out at Schembechler Hall.

Brown, who has been at his home in Cape Cod using the spare bedroom to watch film and work, said he is looking forward to returning to Schembechler Hall. How coaches and players will safely proceed is still in the works.

“I'm not going to be able to just walk in Schembechler Hall and go back to our defensive staff room,” Brown said. “We're going to practice social distancing. We can go to the defensive team room and spread out there and do that. It's going to require small group meetings. Positionally, that'll be an important piece.

“I really don't know what's ahead of me, but I can tell you this — I'm looking forward to it. And I'm excited about it, that I will tell you. I can't wait to coach football."

Earlier this week, Michigan coach Jim Harbaugh on ESPN was asked if he’d be OK playing games if fans are not allowed in massive Michigan Stadium.

Brown agrees with Harbaugh but said there is a challenge playing before few fans.

“It's tough. It's a different environment, but it's all about the preparation,” Brown said. “I've been a high school coach for five years, looked up in the bleachers, there's 600 people there, 500 people. The one good thing is, people get excited about it that are there. But will it be anybody there?

“The key will be the preparation, and I think this, the Michigan football guys that I know, they love football. They love it. They love playing. They love everything associated with it. Not perfect. Did not say they were perfect. But as far as the discipline, as far as the preparation as far as trying to do the best things possible, you're going to get an honest day's work out of those guys every day. And I anticipate just like coach said, I'd rather play in front of nobody than not play because that could knock me into retirement. Maybe some of you want that to happen, I don't.”