Wristbands will be handed out at 9 a.m. for the signing, which starts 3 p.m. at the South State Street store. 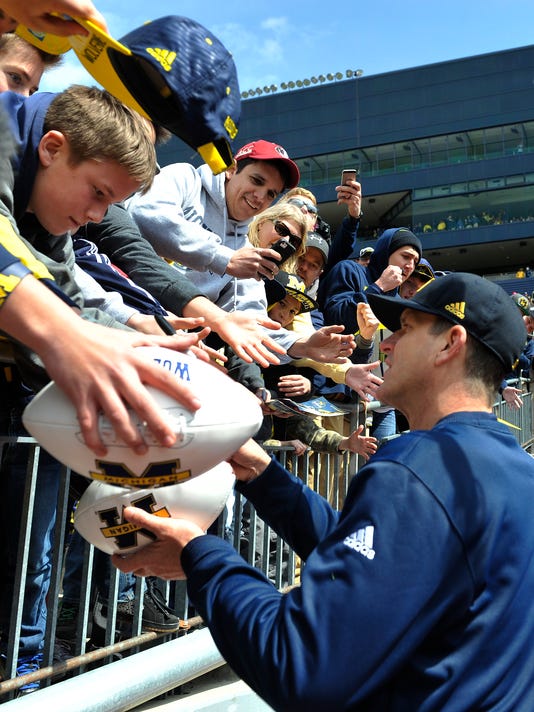 It sounds more like the M-Den, Michigan’s official merchandise retailer, is making preparations for a rock concert.

Michigan coach Jim Harbaugh will spend 90 minutes on Friday at M-Den on State Street signing autographs, and fans will have to arrive early — really early — to pick up a coveted wristband that will put them a step closer to spending a few minutes with him.

Scott Hirth, co-owner of the M-Den, said wristbands will be given out beginning at 9 a.m. Friday at the M-Den (303 S. State Street). Harbaugh will begin signing at 3 p.m., so those with wristbands must be in line by then, otherwise there are no guarantees. Only the first 200 fans with wristbands are guaranteed an autograph, but Hirth hopes there is time to accommodate as many fans as possible. Fans will be limited to one autograph per person. Autographs are free.

“It’s like having rock star,” Hirth said Wednesday. “Coach Harbaugh is the show, nothing else going on. It’s going to be a lot of fun.” About two weeks ago, former Michigan quarterback Denard Robinson, in Ann Arbor for Harbaugh’s “Signing of the Stars” event, had a formal signing session at the M-Den.

“For Denard, we had somebody who flew in from Texas specifically for it, and somebody else drove six hours for Denard,” Hirth said. “It’s hard telling what people are going to do for coach.”

Hirth said he has been working with the Michigan athletic department to arrange a Harbaugh signing since his arrival in late December, 2014.

“Knowing how busy he is, we were never sure this was going to come to fruition,” Hirth said. “It’s going to be fun. It’s only an hour and a half, but that’s all the time he’s got in his schedule. We’ve had a lot of people call about it, and I do think people will come early.”