UM might take another look at Mark Donnal’s status

Mark Donnal’s gone from being a redshirt to being a pivotal member of a team clinging to an NCAA Tournament bid.

UM might take another look at Mark Donnal’s status 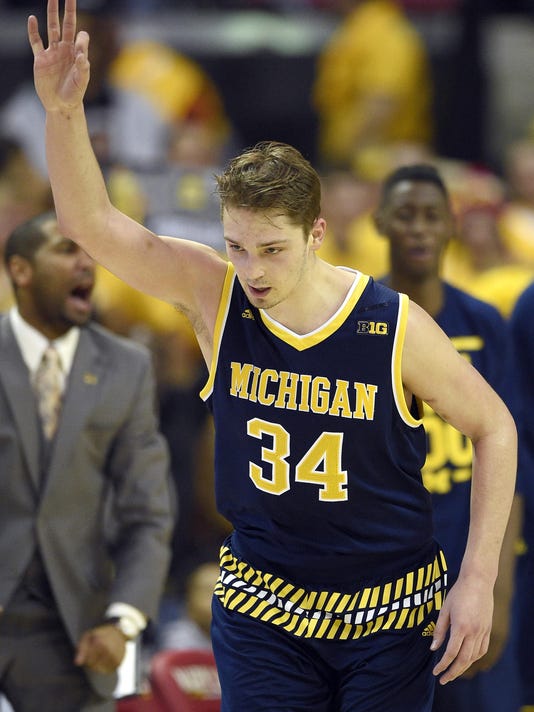 Before the season, coach John Beilein reclassified Mark Donnal from a redshirt sophomore to a junior.

Clearly, the Wolverines — with Ricky Doyle and Moritz Wagner in the fold and Austin Davis on his way next season — had a long-term plan that didn’t include Donnal beyond he next two seasons.

But have things changed now that Donnal has turned into possibly the chief reason the Wolverines remain in the NCAA Tournament picture?

Beilein said that would be addressed after the season.

“It obviously affects our scholarship situation in ’17.”

Donnal started three games early in the season, then was sent to the bench, not to return until the Big Ten opener Dec. 30 at Illinois.

In the victory over the Illini, Donnal set a slew of career highs, including points (26) and rebounds (nine). And his good play has continued.

In 15 Big Ten games, Donnal has averaged 11.2 points, third on the team behind Zak Irvin and Derrick Walton Jr., 5.1 rebounds (nearly half of which are offensive rebounds) and more than a block.

During nonconference play, Doyle and Wagner were getting extended looks, with Donnal almost a forgotten man. The week before Big Ten play, Beilein started seeing something from Donnal in practice and made the switch.

And Donnal hasn’t looked back, even becoming a 3-point threat after being left alone so much.

“He’s so quiet, it’s tough to read anything that’s going on in the big fella’s head,” Beilein said. “His teammates love him.

“It’s tough to know what he’s thinking sometimes, but I’ve seen these little signs of confidence.”

Caris LeVert probably won’t be shut down for the season, although that doesn’t mean he’s going to play again.

“He wants to play so much, that we’re gonna give him every opportunity to play,” Beilein said. “Right till the end. He’s gonna make that decision more than I would.”

Beilein said LeVert still is feeling discomfort in his left leg, which has cost him 13 games.

LeVert was not going to practice Tuesday, and likely will miss tonight’s home game against Northwestern.

“He’s not gonna be playing until he’s ready to play again,” Beilein said.

He hasn’t decided if he wants to keep playing basketball beyond this season, but if he does, the options include playing professionally overseas, playing at Michigan, or playing at another university.

“We’ve gotta do a great job defensively down the stretch or our season won’t be very long,” Beilein said. “It’s that simple.”

... Northwestern has had eight days off to prepare for this game. Michigan hasn’t had more than a week off this season.