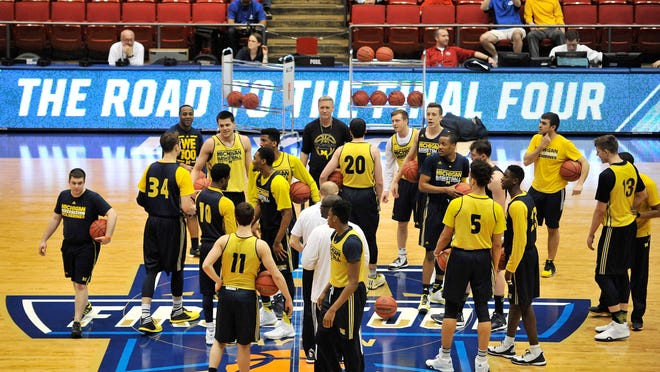 Dayton, Ohio -- Somebody had to be the last team in.

Your prize: Guff from all the national pundits, who believe many others -- St. Bonaventure and Monmouth, to name two -- were much more deserving of an NCAA Tournament bid.

"There's going to be a team every year that everybody says, they shouldn't have gotten in," said Tulsa coach Frank Haith, in his second season. "And we're that team this year.

That play-in game will be at 9:10 Wednesday night against Michigan (22-12), another team with its share of critics, at University of Dayton Arena.

Tulsa (20-11) has felt the heat because of its performance down the stretch, which included two losses to lowly Memphis. Strike that -- two blowouts against Memphis, including one in the American Athletic Conference tournament.

Tulsa was such a shocker to make the NCAA Tournament, the team didn't even watch the Selection Show together.

"We were watching it separately," Shaquille Harrison said. "We knew we had a chance, but we just wasn't for sure.

"So when we saw our names, it was the greatest day."

Tulsa is a senior-heavy team, with many players remaining who played in the NCAA Tournament two years ago, under Danny Manning, who used that run as a springboard for the Wake Forest job.

Michigan, meanwhile, has no active seniors. And there are just two Wolverines who've played in the NCAA Tournament, Derrick Walton Jr. and Zak Irvin.

Everybody seems to agree: Experience matters this time of year.

"Definitely helps," Walton said. "But we're here now and excuses kind of go out the window. And we kind of roll with what we have right now.

"At this point, we just hope to band together and play as best as possible.”

One of Michigan's inactive seniors, Spike Albrecht, has played in two NCAA Tournaments, making the championship game in 2013 -- and scoring 17 stunning points on the strength of five 3's -- and the Elite Eight in 2014.

He was lost early this season to complications from his recovery after hip surgeries.

Albrecht has a message to his team, though: You're going to make mistakes, just make sure the mistakes are aggressive mistakes.

Still, it stings to have to sit this one out.

"It's not difficult like I'm jealous," Albrecht said. "But definitely, it's tough knowing especially how much fun it is to go play in this tournament. And having to sit back and just watch it kind of stinks, but I'm excited for these guys, especially for the young guys who haven't been in the NCAA Tournament before."

Kam Chatman was Mr. Popular in the film room Sunday.

Several coaches, including John Beilein, came up and hugged him after Michigan was announced as an at-large selection, because it was Chatman, after all, who made the 3-pointer with 0.2 seconds left to beat Indiana in the Big Ten tournament.

Chatman is trying his best to downplay the biggest moment of his career.

"Even though I made the shot," he said, "there was a lot that happened before that."

Chatman said he received more than 100 text messages and several Twitter messages immediately after the game.

Has he returned them all?

"Nah," he said, with a laugh. "I tried but it was too much going on. Sorry to the people I didn't get back to!"

Chatman, a sophomore swignman, got boosted minutes as a freshman because of all the injuries, as Michigan finished 16-16 and out of postseason play.

This season, his minutes have gone down, but the team was able to overcome the extended absences of Caris LeVert and Albrecht.

What was the difference?

Not the friendly confines

Tulsa is playing a heck of a lot more than three hours from home.

Yet, the Wolverines are bracing for a hostile environment, for obvious reasons.

"I think everybody assumed, because we're a Midwestern team, that people would gravitate to us," Beilein said. "I do not expect that to happen.

"Certainly, we'll have Michigan fans. And they'll have Tulsa fans. But they're college basketball fans. Most of them reside in the state of Ohio.

"I do not think we'll have a home advantage, and that's OK."

Said Irvin: "You can definitely see it going the other way with us being in Ohio. But we're used to road games. We have like a road warrior's mentality right now."

Haith knows that having only a couple days to prepare for Beilein's offense isn’t the ideal situation.

"Our defense has to be on-point," Haith said. "I think that they're as good of an offensive team as there is in the country."

... Michigan and Tulsa had two common opponents this season, Connecticut and SMU. Michigan lost to both, badly, and Tulsa split with each, in conference play.

... Moritz Wagner loved filling out brackets as a kid, even in Germany. Did he ever win? "I always finished third," he said, quietly.