Turn out the lights: No Michigan night games this year

Wolverines AD Warde Manuel confirmed there will be no night football games this season.

Turn out the lights: No Michigan night games this year

Ann Arbor – Michigan fans eager for a football game under the lights this season will have to wait.

The closest the Wolverines will come to a night game this year is the spring game on April 1, which will begin at 6 p.m. at Michigan Stadium.

Former interim athletic director Jim Hackett said earlier this year he was working on having Michigan host a night game this fall, but about a month later in February seemed to lessen the chances of that occurring.

Manuel said it’s not happening this fall, but is not ruling it out for the future. Michigan hosted games under the lights in 2011 and 2013 against Notre Dame and against Penn State in 2014.

“No (I’m not ruling it out), but I like the daylight,” Manuel said, who played for legendary coach Bo Schembechler who always pushed for early kickoffs. “I’m a daylight-preference football guy. It’s ingrained in me.”

Manuel touched on several football scheduling topics with a small group of reporters after a news conference Thursday morning announcing Michigan Stadium will host Real Madrid-Chelsea in an international soccer match this summer. The two teams last met in 2014 at Notre Dame Stadium, and they are not scheduled to play in the foreseeable future. 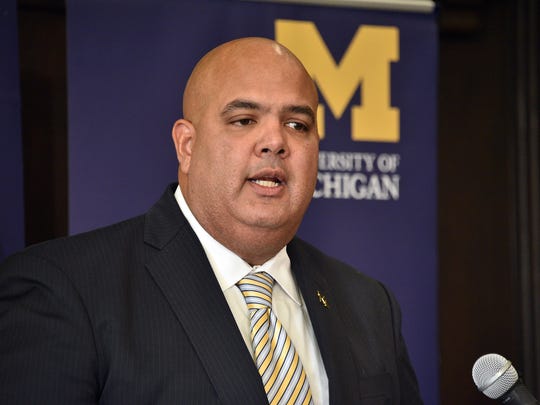 When asked about it last fall, Michigan coach Jim Harbaugh said he would be in favor of rescheduling the Irish.

“I’d have to have a conversation with coach Kelly about that before anybody else,” Harbaugh said. “But (I) would be open to it, yes.”

Schedules are arranged far into the future, but Manuel said Thursday he knows from experience, having played football for the Wolverines, what the Michigan-Notre Dame game means.

“When I played here and for many, many years it was a great rivalry,” Manuel said. “If there are opportunities in the future to bring the rivalry on the football field back, obviously I’d be open to having that conversation, that discussion, because I think it’s not only great for Michigan and Notre Dame football, I think it’s great for college football for that rivalry to continue in the future.”

“I’ve been involved in scheduling football for almost two decades now (and) you can always find ways to put things together,” Manuel said. “But I don’t know when the timeline would be, but I’m not worried we’re out (too far) significantly with games.”

As for potentially staggering the Michigan State and Ohio State games — since the move to divisions in the Big Ten, Michigan is now playing both teams either at home or away every other season — Manuel is not certain anything can be altered.

“I have not had that conversation with anyone there (Big Ten),” Manuel said. “It’s not (ideal). We would prefer to have them in opposite years at home and away, obviously, but those conversations were had for whatever reason.

“They are where they are. We’ll play them when we play them, but it’s not a priority for me to go in and say, ‘I need to shift it.’ It’s more to understand if there’s an opportunity at some point in the future, then maybe. But right now, we’re going to play them as they go.”