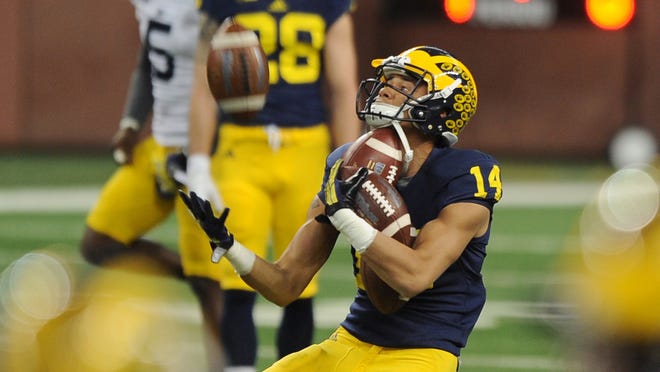 A quick recap of the Twitter escapades of the two storied rivals: Earlier this week, Smith took what was perceived as a dig at Michigan when he was asked if Ohio State would take its football team on the road for spring practice, as Harbaugh did with the Wolverines.

He was referencing Ohio State’s one-year bowl ban and assorted penalties announced at the end of 2011 for violations stemming from eight OSU players taking a total of $14,000 in cash and tattoos in exchange for jerseys and assorted Ohio State memorabilia.

Smith on Wednesday issued two tweets of apology, saying his comments were not meant to “discredit our rival.”

After Michigan’s practice on Saturday afternoon at Ford Field, Harbaugh explained why he felt the need to respond to Smith’s comments.

“It felt like one got shot over our bow,” said Harbaugh, who periodically uses Twitter to get his message across, sometimes directed at other coaches. “It wasn’t a knee-jerk reaction. I waited a good eight, nine hours and figured they might consider that it could be construed a certain way toward our program. Actually some of the scribes and pundits were construing it that way. So when no explanation came, thought it was time to fire one over their bow.

New Michigan athletic director Warde Manuel earlier this week Smith called him to explain the situation and said they had a positive discussion. Manuel said he also had a brief conversation with Harbaugh.

“Warde and I talked,” Harbaugh said Saturday. “Brief conversation. We saw it exactly the same way.”

The Michigan players said they appreciate Harbaugh’s response and weighed in on the perceived slight from Smith.

Cornerback Jourdan Lewis was asked after practice if he thought Smith was taking a shot at Michigan.

“Oh, yeah,” Lewis said. “That was definitely … we’ve been a tradition for how long and you say this is a start-up program? That was unprofessional of him to say. That should have never been said. It should never have went that far.”

“He apologized so I think he knows he was wrong,” Wormley said. “He’s supposed to be a professional, he’s supposed to carry himself in a certain way and when you see something like that, athletes for that team, they’re going to fire back just because that’s what the leader does. So I think when you have that mentality and that kind of character, it shows and it trickles down. Hopefully Warde Manuel doesn’t do that for us. But it’s just something you learn from and take as an experience.”

Harbaugh was noted last fall for some of his wild sideline reactions to officiating he thought went against this team. The players have all said they respect how he is supporting them during game, and they said it extends to this issue, as well.

Lewis said he enjoys watching his coach mix it up, whether it’s on the field or on social media.

“I like seeing a coach who doesn’t mind getting his hands dirty,” Lewis said. “Our coach doesn’t care. As long as we go out and perform, it’s fair game.”