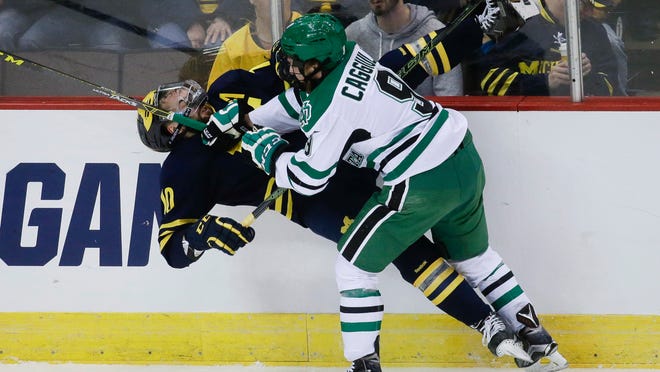 Cincinnati — It took 38 games for Michigan to find its match.

Saturday, at the U.S. Bank Arena, the Wolverines faced a North Dakota squad that was bigger, faster and stronger. And those advantages led the Fighting Hawks past the Wolverines, 5-2, ending Michigan’s season in the Midwest Regional final.

North Dakota’s victory sealed its eighth trip to the Frozen Four in the last 12 years — an unmatched feat in college hockey.

“The game got away from us right from the get-go,” Berenson said. “They were quicker. They were hungrier. They were better.

“It’s a disappointing end to your season. North Dakota was the better team tonight and we didn’t bring our best game and it wasn’t good enough against a team like that. We just weren’t good enough.”

North Dakota (32-6-4), though, matched the Wolverines’ quickness and it was apparent early. The Fighting Hawks controlled the game’s pace from the get-go, outshooting Michigan 22-5 in the game’s first 16 minutes. And just when it seemed like netminder Steve Racine was immortal, North Dakota capitalized on the smallest of Michigan errors.

Senior Boo Nieves skated the puck into UM’s offensive zone, before turning it over to Drake Caggiula, who eventually banged home his own rebound on a breakaway chance. Caggiula is part of North Dakota’s CBS line —Caggiuila, Brock Boeser and Nick Schmaltz — which is the only line that can rival Michigan’s CCM line of Kyle Connor, JT Compher and Tyler Motte.

Heading into the game, the CBS line boasted a plus-116 rating, while the CCM line posted a plus-104.

“They buried their chances when they got them,” Compher said.

But the Wolverines’ top-ranked offense wouldn’t remain scoreless for much longer.

After North Dakota controlled the game’s possession for the first 20 minutes, Michigan made some offensive changes that reaped dividends. Just over five minutes into the second period, junior captain Compher received the puck in the slot, and held it for a few seconds before wristing a laser past Cam Johnson.

But in the last minute of the second frame, when Michigan seemed to have the game’s momentum, North Dakota capitalized on the smallest of its chances. Just as Compher tried to backhand the puck out of the zone, North Dakota’s Luke Johnson found the puck on his stick and rifled it past Racine.

Then North Dakota took a power play, giving Michigan its first full man-advantage opportunity of the NCAA Tournament. And Michigan capitalized after Compher tallied his second goal of the game on a one-timer chance off of a feed from Connor.

The assist marked Connor’s 71st point of the season, vaulting Connor past his coach, Berenson, in the Michigan single-season point total record book.

But North Dakota stayed even keeled, gaining a 3-2 lead when Paul LaDue took a shot from the blue line that scurried past a sprawled out Racine. And before the Fighting Hawks allowed Michigan any chance to come back, just two minutes after their third goal, they scored their fourth — putting the game out of reach.

“We made mistakes,” Compher said. “I think that we stayed in the game and weathered the storm early and made a big push to come back.”

Added Berenson: “You need to do three things in these big games. One, you need goaltending. Two, you need to put your chances in. And three, you need to check the other team’s best players. I thought we did one of those three and that was goalkeeping.”

But Racine’s 44 saves weren’t enough to bail out the Wolverines. In the end, the Fighting Hawks had the answers.

They knew they needed to play clean hockey. Check.

They knew they needed to capitalize on the smallest chances. Check.

And they needed to leave Michigan’s forwards no room, bulldozing their electric offense. Check.

If they did all the above, they’d make it back to the Frozen Four and end Michigan’s season.

Jason Rubinstein is a freelance writer.