Lure of seeing Jim Harbaugh's charges practice up close was too good to pass up for those who may wear Maize and Blue.

Jack Harbaugh was on the sidelines at Ford Field. Max Ortiz / The Detroit News
Fullscreen 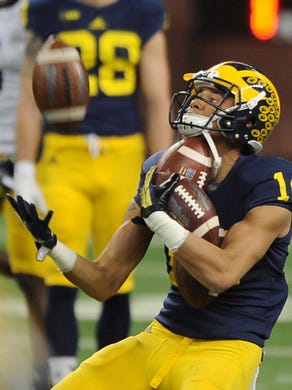 Conner Heald, 4, of Hastings, Michigan, wears his team's colors as the University of Michigan has a full team practice at Ford Field. Max Ortiz / The Detroit News
Fullscreen 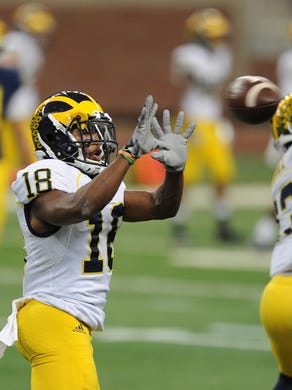 Player helmets are seen scattered in the end zone at Ford Field as the University of Michigan entrained a crowd on Saturday March 26, 2016. Max Ortiz / The Detroit News
Fullscreen

Detroit — Jim Harbaugh brought his team 45 minutes down I-94 to practice at Ford Field Saturday as he continues to come up with creative ways to spread the Michigan football brand.

The Wolverines coach took his players on a somewhat controversial spring break trip to Florida at IMG Academy, home to a number of the country’s top recruits.

Harbaugh kept things a little more local this time as the four-hour practice at the home of the NFL Lions brought Michigan into downtown Detroit, giving players, coaches and fans a close view of the Wolverines.

One high-profile recruit in attendance was Ambry Thomas of Detroit King, a Scout.com-rated four-star defensive back who is high on the Wolverines’ wish list for the 2017 class.

Thomas helped lead King to a state championship last November at Ford Field, but Saturday he was there to get a little glimpse into what life as a Wolverine would be like.

“I wanted to watch what they do with their DBs and pay attention to how they run the practice,” Thomas said. “I was up there yesterday for a team meeting.”

There’s no mistaking that a lot of Harbaugh's outside-of-the-box ideas about where his team practices centers on spreading his recruiting reach.

“I like this a lot,” Thomas said. “I didn’t think this many people would come out to watch practice. It shows what a great fan base they have. Michigan is definitely going to be in my top three when it comes time to choose.”

There was an estimated crowd of 6,000 at Ford Field for Saturday's practice.

While recruiting plays a big part in what Harbaugh is doing, it doesn’t just end with the players that could end up in Ann Arbor. It has a bigger reach. It’s about making everyone want to play for the University of Michigan.

Steven Weideman, a linebacker from Grosse Pointe South who graduates in 2018, was taking in practice with his buddies and hoping one day he could be on that field.

“It’s good exposure to advertise Michigan football and try to get people excited about it,” Weideman said. “I’m just trying to see how practice is conducted at the college level and I hope to play one day. Michigan’s a great university.”

It’s late March and people are talking about Michigan football.

Geoff Robinson is a freelance writer.