Buried in an early two-touchdown deficit, Michigan experienced its first real test of the young season as most expected.

Michigan's Grant Perry celebrates as he scores a touchdown by returning a blocked punt by teammate Michael Jocz (81) 6-yards to the end zone in the first quarter to cut the Buffaloes' lead to 14-7 after the extra point. Michigan rallied from a 21-7 deficit in the first quarter to beat Colorado 45-28 at Michigan Stadium in Ann Arbor on Saturday, September 17, 2016. John T. Greilick, Detroit News
Fullscreen

Michigan wide receiver Grant Perry celebrates after returning a blocked punt for a touchdown in the first half. David Guralnick, Detroit News
Fullscreen

Michigan fans celebrate a touchdown by Grant Perry who scooped up a blocked punt by teammate Michael Jocz and returned it six-yards for a touchdown to cut the Buffaloes lead to 14-7. John T. Greilick, Detroit News
Fullscreen

Michigan head coach Jim Harbaugh leads the team out onto the field for the start of the game. David Guralnick, Detroit News
Fullscreen 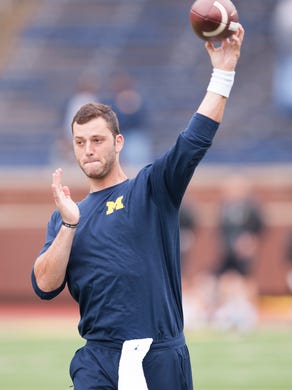 A pair of excited Colorado fans cheer after the Buffaloes forced a fumble by Michigan quarterback Wilton Speight and returned it for a touchdown. After the extra point it was 14-0 in favor of Colorado. John T. Greilick, Detroit News
Fullscreen

Colorado Buffaloes head coach Mike MacIntyre is upset after a flag was picked back up in the first half. David Guralnick, Detroit News
Fullscreen

Michigan wide receiver Amara Darboh breaks away from Colorado defensive back Afolabi Laguda and heads to the end zone for a go-ahead touchdown in the second quarter. John T. Greilick, Detroit News
Fullscreen

Michigan wide receiver Amara Darboh breaks away from Colorado defensive back Afolabi Laguda and heads to the end zone for a go-ahead touchdown in the second quarter. John T. Greilick, Detroit News
Fullscreen

Michigan defensive tackle Maurice Hurst gets around a block to chase Colorado quarterback Steven Montez (right) out of the pocket. Hurst would catch up with Montez for a sack on the play. John T. Greilick, Detroit News
Fullscreen

Members of the Michigan Dance Team fire up the crowd at the Big House. John T. Greilick, Detroit News
Fullscreen

Members of the Michigan Dance Team fire up the crowd at the Big House. John T. Greilick, Detroit News
Fullscreen

Connor Jaeger, a former member of the University of Michigan swimming and diving team takes in the sights from the sidelines during the first half. Jaeger won a Silver medal in the men's 1500 meter freestyle swim event at the 2016 Rio Olympics. John T. Greilick, Detroit News
Fullscreen

Michigan safety Tyree Kinnel (23) and wide receiver Grant Perry (9) are all smiles after the victory. Perry scored a touchdown on a blocked punt and caught a pass for 54 yards in the game. John T. Greilick, Detroit News
Fullscreen

Michigan QB Wilton Speight tosses a towel to a fan as he jogs up the tunnel after the Wolverines' 45-28 victory. Michigan is 3-0 on the season. John T. Greilick, Detroit News
Fullscreen

Michigan linebacker Jabrill Peppers celebrates with the fans on his way up the tunnel after the game. David Guralnick, Detroit News
Fullscreen

Ann Arbor – Buried in an early two-touchdown deficit, Michigan got its first real test of the young season, and in the end, the players said it was just what they needed.

Michigan’s do-everything Jabrill Peppers was the spark the entire game and made important defensive stops early giving quarterback Wilton Speight and the offense time to eventually find their way, delivered outstanding field position off his returns, and added a punt return for a touchdown late to tack an exclamation point on the victory.

It wasn’t all Peppers, but it was a lot Peppers in a 45-28 victory over Colorado before 110,042 at Michigan Stadium on Saturday.  Colorado played much of the second half without starting quarterback Sefo Liufau and never recovered from his absence. Liufau was 16-of-25 for 246 yards and three touchdowns before suffering what appeared to be a leg injury.

Peppers accounted for 204 total yards, including 99 yards on punt returns. He scored on a 54-yard punt return – the first of his career – for the Wolverines’ final score. He also made his first appearance this season on offense and had 24 yards rushing.

Jabrill Peppers on his punt return for a TD against Colorado.

He had nine tackles – second behind Ben Gedeon’s 12 – a sack and 3.5 tackles for loss, including a one-yard loss in the first half that held the Buffaloes to a field-goal attempt they missed. His 55-yard kickoff return in the second half gave Michigan the ball at the Buffaloes’ 45-yard line and set up the Wolverines’ go-ahead score, 31-28. They never trailed again.

“It was definitely a sense of relief,” Peppers said of the punt return for the touchdown. “I felt a couple of those punts I could have taken one back. When you get a line drive and great blocking, man, if you don’t score then, they’ve got to put somebody else back there.

“The hole was wide open. They leave it upon me to make a couple guys miss. I felt as though I did that. I started cramping about the five (yard line). I was like, ‘There’s no way I’m not getting in this time.’ I was tired of just being the almost kind of guy. It definitely felt good to finally punch one in.”

Former Michigan quarterback and four-time Super Bowl champion Tom Brady spoke to the team before the game and was the Wolverines’ honorary captain and joined the captains for the coin flip. Meanwhile, former Michigan assistant and Colorado coach Bill McCartney was the Buff’s honorary captain.

Colorado wore throwback uniforms from the 1994 team that beat Michigan on the Hail Mary forever seared into the memories of the U-M players who were on the field that day and fans from both schools.

It was never about that game, of course.

The Buffs (2-1) had a 21-7 lead at the end of the first quarter, and Speight was working to overcome his aching elbow. Rebounding from that deficit and holding it together after Colorado took a 28-24 lead early in the second half was just what the Wolverines needed, the players said, after outscoring their first two opponents, 114-17.

“We weren’t worried,” said tight end Jake Butt, who had seven catches for 87 yards. “We knew the first two games we were really never punched in the face. Everything was going so smoothly. It’s not going to be a fairy tale the whole entire season. There’s going to come a point in time we were going to get punched in the face, where we were going to get backed in the corner. We fought back. We stuck together and rode that wave.”

Special teams played a significant role for Michigan for the second straight week. Grant Perry scored Michigan’s first touchdown on a blocked punt return and Peppers had his punt return for a touchdown. Kenny Allen was 1-of-3 on field goals and Harbaugh said the snaps and kicks were just off.

Speight struggled after taking a sack from Chidobe Awuzie in the second series of the game and fumbling. Dere McCartney recovered the fumble and ran for the score to give Colorado a 14-0 lead. Speight was 16-of-30 for 229 yards and a touchdown. He was 9-of-21 for 124 yards in the first half and was out of rhythm, he said, after the sack and was off his game.

“Right in the sweet spot,” Speight said, referring to Awuzie’s hit in his right elbow, which was wrapped after the game. His shoulder also was wrapped but he said that’s always the case after a game. “It definitely hurt. But I try with every play and every hit to move on.

“Sore, yeah, but it’s no excuse.  Out of rhythm, yeah. Definitely wasn’t playing my game.

“They came out fast. They hit us in the mouth quite a few times. That was big to be the third game of the season and have them come out swinging like that. We took a few big blows, but we were able to swing back.”

Jim Harbaugh discusses Jabrill Peppers after the win over Colorado.

Amara Darboh scoring on a 45-yard pass from Speight with 33 seconds left was one of those Michigan counter-punches that gave the Wolverines their first lead at 24-21.

Colorado regained the lead quickly at the start of the second half. Liufau, hit on the play by Michigan Ryan Glasgow, managed to complete a 70-yard touchdown pass to Shay Fields for the 28-24 lead.

“He got that ankle injury that looked pretty serious and hops up and drifts out to his right and throws a post right that is as good a post route as you could possibly throw,” Harbaugh said.

But Michigan came right back and went ahead 31-28 when tailback De’Veon Smith ran 42 for the score. The Wolverines never trailed again.

Liufau tried to continue playing but was hopping on one leg and after taking a sack by Glasgow and Mike McCray to end the next series, Steven Montez replaced him.

The Buffaloes were 1-of-13 on third down. After their last score, they went three-and-out four times and turned over the ball once on downs.

“The dialogue we had with the offense was great today,” Glasgow said. “It was, ‘If you stop them, we’ll score, if you score, we’ll stop them.’ We started having that attitude and we started feeding off each other. That’s when the tides turned.”