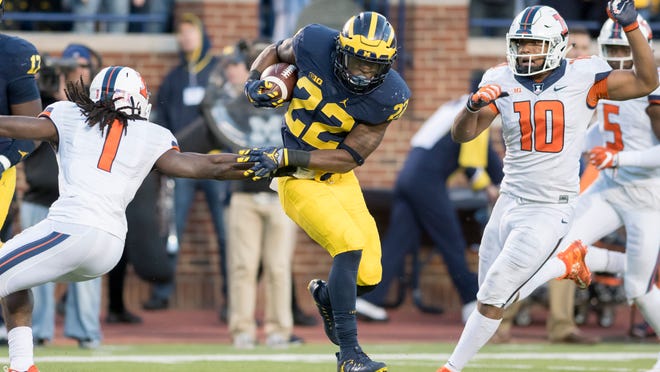 Ann Arbor – Seven games down this season, and now the Michigan Wolverines are finally able to focus on their annual rivalry game with Michigan State.

The Wolverines, as expected, had no problems Saturday against Illinois, winning 41-8 on homecoming at Michigan Stadium. Michigan, ranked No. 3, is now 7-0, 4-0 Big Ten.

Michigan plays at Michigan State on Saturday, the first of three road games in the final five regular-season matchups for the Wolverines. The Spartans have won seven of the last eight in the rivalry, and nothing was more stunning than their victory last season in the final 10 seconds. The Spartans picked up Michigan’s fumbled punt and scored to win, 27-23.

“All I can say is, really, those last couple seconds are still boiling, like we still taste it in our mouths,” said Michigan running back De’Veon Smith, who rushed for 76 yards and scored a touchdown against the Illini. “We’re going to give Michigan State all (we have) this week.”

But first things first for the Wolverines, who had not played in two weeks.

They had 561 yards, almost evenly divided – 291 passing, 270 rushing. Illinois, which had no passing yards in the first half, was held to 172 yards. Michigan had 29 first downs to the Illini’s six and dominated time of possession, holding the ball 41:23. Dymonte Thomas had an interception and Mike McCray a fumble recovery, and there was a deflected Illinois punt that went nine yards.

Quarterback Wilton Speight was 16-of-23 for 253 yards and two touchdowns. He said he spent last week without a game to prepare for watching film of the first six games and identified what he needed to work on.

“The first three drives of the game, and then the entire game, I thought Wilton Speight may have had one of his best games of his career,” Harbaugh said. “It was pretty windy out there. It was tough to throw. He was throwing the intermediate deep stuff, the 30-yard throws, the 35-yard, the 40-yard throws, just on the money. It was impressive. Sometimes it’s never as good as you think until you look at the tape. I have a feeling that was the best he’s played.”

Amara Darboh led the receivers with 99 yards on five catches, and Karan Higdon was the leading rusher with 106 yards and a 45-yard touchdown run late in the game. De’Veon Smith and fullback Khalid Hill each scored a rushing touchdown. It was Hill’s eighth rushing touchdown of the season.

There was a different combination on the left side of offensive line for the Wolverines against Illinois. Senior Ben Braden moved from left guard to left tackle and freshman Ben Bredeson started at left guard.

Since Grant Newsome suffered a season-ending injury against Wisconsin, Michigan has done some tinkering at left tackle. Juwann Bushell-Beatty started at left tackle against Rutgers two weeks ago, missed a couple plays after being injured, and center Mason Cole moved to left tackle, the position he played the last two seasons.

Bushell-Beatty played with the second-string offensive line in the fourth quarter, when backup quarterback John O’Korn took over for starter Wilton Speight.

“He’s a very versatile player,” Harbaugh said of Braden. “We felt like that was our best combination, Ben Braden and Ben Bredeson. Ben is an ascending player, thought he had a heck of a good game today.”

The Wolverines, coming off a 78-0 rout of Rutgers two weeks ago, had scored 119 unanswered points before the Illini struck in the fourth quarter, scoring on a 43-yard pass from Jeff George Jr. to Malik Turner. Illinois made the two-point conversion.

Michigan showed no rust considering the Wolverines had not played in two weeks. Perhaps the most significant playing time was for kicker Kenny Allen on field goals. The Wolverines had not attempted one since missing three against Wisconsin. Allen made both attempts against the Illini from 23 at the end of the first half and 27 yards late in the third quarter.

They built a 31-0 at halftime after accumulating 316 yards, including 151 rushing.