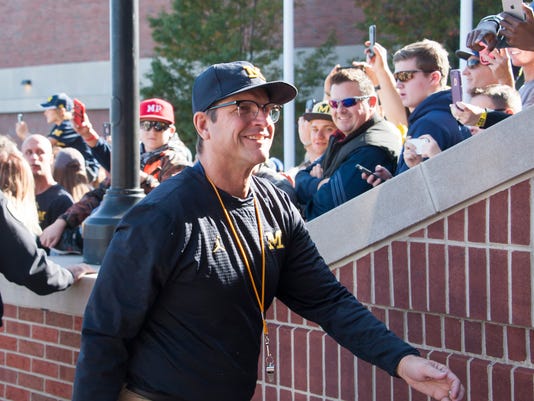 According to expenses obtained by The Detroit News through an open-record’s request, Michigan spent roughly $100,000 more than it did the previous year for its less-exhaustive eight-day tour for Harbaugh and his staff.

Harbaugh and his staff worked nearly 50 camps over the summer across the country and also in Australia and Samoa.

Michigan athletic director Warde Manuel, after a Regents meeting this summer, said at the time he estimated the camp tour would cost about $350,000. He said he and Harbaugh had worked on a budget.

Manuel said at the time the camp tour was not about recruiting.

“It’s an investment we’re making in our program, in the things he’s doing with the kids and our coaches are doing across the country,” Manuel said in June.

“Given the amount of effort they’re putting in, the amount of contact they’re making with the kids across the country, getting them excited about football … teaching them the game the right way, talking to them about not only football but the need to perform academically, to me, it’s a great investment in what we need to be doing.”

Last month the NCAA Division I council proposed limiting schools to 10 days of off-campus clinics and camps. Harbaugh said during an interview on 97.1 The Ticket that he supported the proposal even though it would “take away a lot of fun.”

“We did close to 50 last year, and that was a lot of fun,” Harbaugh told the station on which he does a weekly interview. “But heck, if every school is doing 10, then that’d probably be more than what was done last year. So there’s a possibility it’s a really good thing.

“The big thing is that football’s being spread across the country, and youngsters are getting good coaching and have opportunities to show they can do.”

Under the previous rules, staffs could participate in off-campus clinics over two, 15-day periods.

“If you do the math, if everybody did 10, that’d be phenomenal,” Harbaugh said. “I’m going to be for it. I think it could be a real positive.”