Michigan launched the 2006 Ohio State game week as it has for many years, with a Monday news conference in Ann Arbor.

Michigan launched the 2006 Ohio State game week as it has for many years, with a Monday news conference in Ann Arbor.

While the early week lead-up was routine, this game was different. Ohio State was No. 1, Michigan No. 2, which remains the only time that had happened in the series, and a national championship berth was on the line in that final regular-season game.

Fast-forward 10 years later, and it is Michigan No. 3 heading to Ohio Stadium to face No. 2 Ohio State on Saturday in a game that has Big Ten and national championship implications. This is the first top-five matchup between the arch-rivals since the 2006 game that the Buckeyes won, 42-39.

“I can’t believe it’s been 10 years,” said Jake Long, Michigan’s All-American left tackle from that team. “To this day, that was such an emotional game that had so much riding on it.

“I remember it every day. It haunts me all the time. But I have no regrets for that game. We played our hearts out. We couldn’t have played any better.”

The Monday news conference that year was so large, Michigan moved it to the Junge Center to accommodate all the Ohio-based and national press in addition to the local media.

“I remember there were six or eight of us and we had to all meet individually with coach (Lloyd) Carr,” center Mark Bihl said. “And he said, ‘Say nothing. If they ask this, say this.’”

Bihl and several of the players observed from the Michigan production room as their teammates one by one met the media. They had taken some press-room pizza and watched as Willis Barringer was asked what he thought about Ohio State coach Jim Tressel having Carr’s number in the series.

“Maybe he should give him a call sometime,” Barringer said.

Wojo's Pigskin Picks: Rivalry is back, and nutty Buckeyes know it

If mic drop had been a thing then, that would have been a worthy moment.

“I remember spitting the pizza on the floor,” Bihl said, recalling the laughter that ensued.

Carr made sure that week to insulate his players from the outside world and the building excitement for the game.

“To be honest, the hype was all done by the media,” kicker Garrett Rivas said. “Lloyd did such a good job of keeping the hype out of it. He always talked about it being such a special rivalry, a game that meant so much to us that the 1 versus 2 didn’t matter, the media hype didn’t matter. It was about us doing what we needed to do to get to a national championship.”

Legendary Michigan coach Bo Schembechler appeared weakened physically that week, but he insisted on speaking to the team on Thursday. He was a major part of the backbone of the modern-era rivalry, Bo versus Woody and the 10-year war.

He had an office in the football building named for him, and the players frequently visited with him and knew him well.

“If anybody has been around Bo for a second, he has this aura, almost like Yoda,” defensive end Rondell Biggs said. “He has this energy that exudes from him. When he speaks, it resonates. Being around him would get us pumped up. Glad I had the honor to be around him as much I did.” 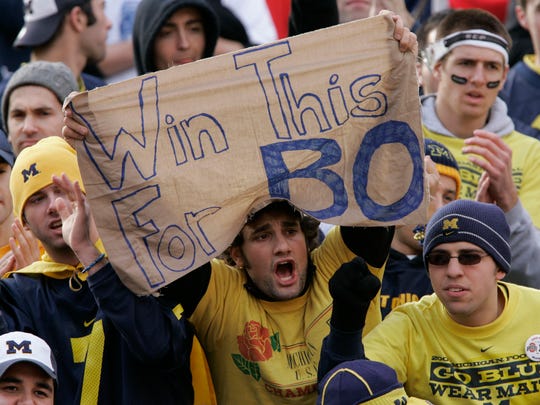 A Michigan fan holds a sign for Bo Schembechler, who died one day before the 2006 Michigan vs. Ohio State game. (Photo: AP)

Schembechler spoke that night leaning against the podium and told the players about some of the Michigan greats who had special moments in the rivalry game. He told them how important the Ohio State game is to Michigan.

“What was more memorable than anything else was the amount of passion he had for the rivalry and what it meant,” Rivas said. “Had you never known anything about Michigan-Ohio state, like a freshman who only knew Florida-Florida State, you would have known what that game was all about.

“It was something I’ll never forget. It was such a passionate speech. You know what that game meant to him. It seemed as though he wanted to deliver that speech as though he knew he was going to go. Lloyd told him you don’t need to do this, and he said, ‘No I’m absolutely going to do it.’ He got it all out that night that’s for sure.”

“There wasn’t a dry eye in the room,” Bihl said.

Long-time equipment manager Jon Falk, hired to Michigan by Schembechler, dropped by Schembechler’s office, shook his hand and told him it was one of the best speeches he had ever delivered.

“Good, good,” Schembechler told Falk. “Little did I know that would be the last time I shook Bo’s hand.”

Schembechler, a day after delivering that impassioned Michigan-Ohio State speech, died on Friday before the players boarded the buses in Ann Arbor to head to Columbus.

“It brought a whole other element beyond 1 versus 2 in the country,” Biggs said. “Bo dies literally right before the game. It was surreal at the moment, almost like a dream. Is it really happening? It was a lot to take in.”

“The media and fans had written it up like, ‘They’re going to win this for Bo,’” Rivas said. “Lloyd made it very clear before we left that we’re not going to win for Bo because that’s not what Bo would want. He wouldn’t want to make it about him. It’s about Michigan-Ohio State.”

It was expected to be a defensive struggle, but 81 points were scored. The Buckeyes won that game on Nov. 18 before 105,708 at Ohio Stadium and headed to the national title.

“It was such a great game,” Long said. “We fought back and forth, two great teams going at it. It was a fight out there. Being 10 years removed, I can see the beauty of what that game was and how great both teams played.

“We went back and forth exchanging field goals and touchdowns. We were hoping we would get the ball one more time. We could score on them all game. There was so much emotion in the locker room afterwards and during the ride home.  I don’t think we had one drop left in us. It was a quiet ride.”

Biggs still has a hard time talking about the game.

“We all collectively were devastated we didn’t come out with a win,” Biggs said. “That’s a tough pill to swallow, being seniors and being that close to a dream.”

For the last decade, Biggs has tried hard not to think about it.

“I did a good job of blocking it out of my mind,” he said. “It took me forever to watch the film. But we had to watch and study it. Even today, my skin crawls when the game pops on. It’s tough to even talk about, but I’m getting better about it.

Bihl, an Ohio native who lives there now, gets asked about the 2006 game all the time. A few weeks ago while in Kentucky for a wedding, he was with his young sons who were wearing blue ties and Michigan jackets. They were getting ready to watch Michigan’s night game at Iowa and a bunch of Kentucky fans playfully gave the kids a hard time. They informed the group their father played football.

Ten years later, the hype continues to build for another matchup of two top-three teams in the Michigan-Ohio State rivalry. Will it be as iconic? Time will tell soon enough.

“It’s exciting,” Long said. “It’s pretty much the same implications are out there. Whoever wins this game will have a shot for the Big Ten title and the playoffs. It’s definitely the same type of atmosphere, the same type of hype.”

But this Michigan team wants a different outcome.