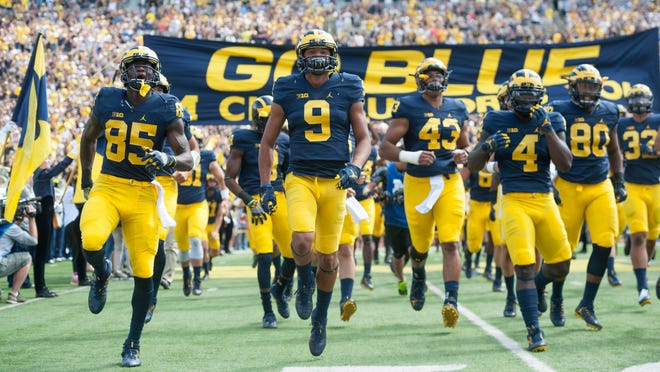 It’s always easy to remember the end of a long, 12-game regular season, particularly the way Michigan’s concluded, with coach Jim Harbaugh “bitterly disappointed” with the officiating in the loss at Ohio State.

Michigan finished 10-2, losing twice in the final three weeks, eliminating the Wolverines from the College Football Playoff. Instead, they are preparing to face Florida State on Friday in the Orange Bowl, a New Year’s Six Bowl.

Here are 10 of the most memorable moments from Michigan’s season.

With 2:15 left against Wisconsin on fourth down, Jourdan Lewis’ correct move would have been to bat away the ball. Instead, the Michigan cornerback seemed to defy gravity for an instant and hauled in a remarkable one-handed interception to seal the Wolverines’ 14-7 triumph.

He jumped early to defend the throw from Alex Hornibrook intended for George Rushing.

“I’ve seen Odell Beckham Jr. do that,” Michigan coach Jim Harbaugh said after the game. “Looked like that kind of play. The most impressive thing about it, he jumped a little early. I was a little nervous he was going to come down and the ball was just going to go over his fingertips, but he was able to hang in the air and made a spectacular play.”

His teammates were astonished. “When he came down with the ball, everybody kind of looked around and was like, ‘Did we just see that? Did that just happen?’ It was crazy,” running back Ty Isaac said.

Peppers to the house

It had been a long time coming when Michigan’s do-everything Jabrill Peppers finally scored on a punt return, taking it 54 yards to score in the 45-28 win over Colorado.

“It was definitely a sense of relief,” Peppers said. “I felt a couple of those punts I could have taken one back. The hole was wide open. I started cramping about the 5 (yard line). I was like, ‘There’s no way I’m not getting in this time.’ I was just tired of being the almost kind of guy.”

Peppers accounted for 204 total yards, including 99 on punt returns, in that game. He had nine tackles, including 3.5 for loss and a 55-yard kickoff.

Wilton Speight had won the job as starting quarterback, made his first start, took his first snap and on the very first play of the season opener he … threw an interception.

“It wasn’t the start I was imagining,” he said.

Coach Jim Harbaugh laughed it off and Speight responded by leading a 98-yard touchdown drive in 11 plays, and Michigan was on its way to a 63-3 win over Hawaii in the season opener.

Speight was named the team’s Most Improved Player at the season-ending bust. His mother, Martha, teased her son about the award.

“Considering the first pass of the season, I would think it’d be pretty tough if he hadn’t improved,” she told the crowd, drawing laughs. She called the award one of the great honors he could have.

Jim Harbaugh held his hands about a foot apart to indicate how short he believed Ohio State quarterback J.T. Barrett was on fourth down in the second overtime. The officials gave him the first down, confirmed by review.

After Michigan’s 30-27 defeat, Harbaugh spent most of his post-game news conference critical of the officiating and later drew a reprimand from the Big Ten and a $10,000 fine.

He pointed out the discrepancies in the penalties. Ohio State had two for six yards, while Michigan was penalized seven times for 59 yards.

“Two penalties called all day,” he said. “Multiple holding penalties let go, multiple false starts. The official on my side is supposed to be watching that (and instead) is concerned about whether our coaches are in the white or not in the white (of the coaches’ box). Wants us not on the field. Their coaches were on the field practically in the huddle at times. I’m bitter.”

This won’t make Jourdan Lewis’ highlight film for NFL scouts, but it’s tough to forget Lewis getting absolutely annihilated on a kickoff return by the rotund 5-foot-10, 260-pound Penn State kicker Joey Julius. Julius had to shake off the hit, too.

“I did not see him at all,” Lewis said. “He thought he was going to make the tackle, and he did. And I’m going to put this out there – I’m not trying to throw any shade, but Jabrill (Peppers) did miss a block.”

Lewis joked about that, and he also received plenty of ribbing for getting tackled by a kicker from friends across the country. “That moment wasn’t the best,” Lewis admitted.

“He can rip it. He can throw it well,” Harbaugh said. “I wish I wouldn’t have given him the wind.”

Harbaugh said of course he was trying to compete with Brady. “He throws a good ball,” Harbaugh said. “The ball almost catches itself the way he throws. That’s one heck of a ball he throws.”

Michigan had a 10-game winning streak dating back to the bowl game when the then-No. 3 Wolverines headed to Iowa City for a night game. Even with the nation’s No. 1 defense and an offense that was rolling, averaging 48 points, they could not preserve their unbeaten season. Iowa freshman Keith Duncan made a last-second field goal to give the Hawkeyes a 14-13 victory.

Late in the game, starting quarterback Wilton Speight, who threw for only 103 yards, suffered an injury to his left shoulder that caused him to miss the Indiana game the following week. The Hawkeyes boldly went at Michigan’s run defense behind Akrum Wadley, who gained 167 yards rushing.

Minus the slip at the end, Jabrill Peppers’ return of Michigan State’s busted two-point conversion late in the game was a study in speed. He sprinted 87 yards by the MSU sideline for the defensive PAT and crossed the end zone with a runner’s lean.

“At first I wasn’t trying to run fast, but then I heard somebody behind me, Peppers said. “I’m (like), ‘OK, stop trying to be pretty. Just get the ball in the end zone and put it out of reach.’”

And then he slipped in the back of the end zone and wound up on his back. Regardless, coach Jim Harbaugh thought it was breathtaking. “I thought I heard a sonic boom!” he said. “I was a little disappointed parachutes didn’t come out. Impressive. Mercy!”

Starting left tackle Grant Newsome endured a badly injured knee against Wisconsin. With teammates surrounding him on the field, Newsome rejected the use of a cart to take him to the locker room. He remained hospitalized for 38 days and is now walking with crutches.

With Newsome out, Michigan was forced to shuffle the offensive line. Juwaan Bushell-Beatty made one start in place of Newsome and then left guard Ben Braden moved out to left tackle and freshman Ben Bredeson took over at left guard.

Michigan defeated Indiana, 20-10, on Senior Day at Michigan Stadium, and while Jim Harbaugh called it winning an important “playoff” game, the end of the game was all about the snowy spectacle. It was dark by the fourth quarter and the lights in Michigan Stadium made the entire scene look like a giant snow globe.

It became difficult to see the field and the players, and when it was all over, the players took advantage of the magical moment and slid in the snow and made giant snow angels. They were gigantic angels, but angels nonetheless.