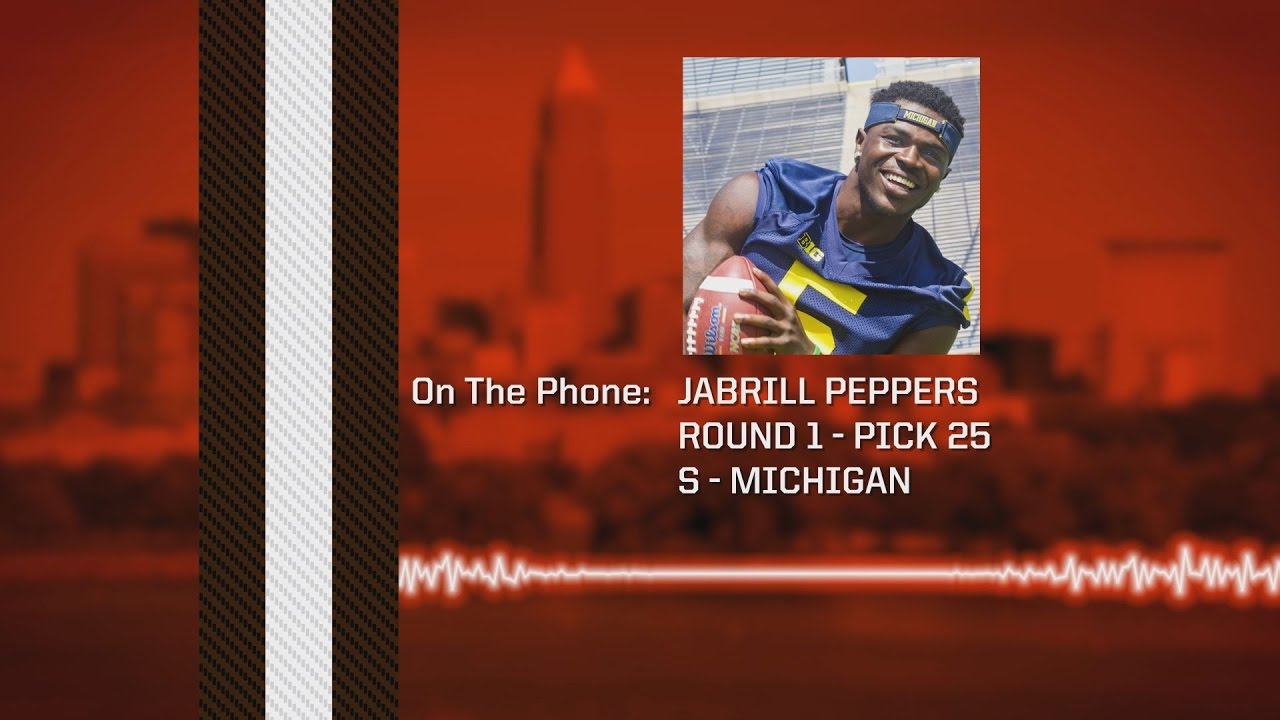 Michigan Heisman Trophy finalist Jabrill Peppers waited nearly three hours before hearing his name be called Thursday night during the first round of the NFL draft, which was held on the steps of the Philadelphia Museum of Art with more than 70,000 fans looking on.

Peppers was picked No. 25 by the Cleveland Browns. It was the Browns' second pick of the opening round after grabbing Texas A&M defensive end Myles Garrett with the No. 1 overall pick.

Michigan defensive end Taco Charlton joined Peppers as a member of the NFL minutes later when he was picked No. 28 by the Dallas Cowboys.

The Wolverines had just two first-round draft picks — Brandon Graham (No. 13, Philadelphia) and Taylor Lewan (No. 11, Tennessee) — during the previous eight years.

"They believed in me," Peppers said of the Browns. "So they're going to get more than 200 percent our of me."

Peppers (5-foot-11, 213 pounds) is extremely versatile, capable of playing safety, cornerback or linebacker while also returning kicks and punts if called upon.

In fact, one publication — Lindy’s Sports Pro Football Draft — was so impressed with Peppers that it compared him to former Steelers All-Pro safety Troy Polamalu due to his aggressive style. Polamalu was the NFL’s Defensive Player of the Year in 2010.

"One of my favorite players in this draft ... he brings explosive energy," the NFL Network's Mike Mayock said of Peppers.

Peppers was the Big Ten Freshman of the Year, a first-team All-Big Ten selection in the secondary his sophomore year in 2015 and Big Ten Linebacker of the Year this past fall after recording 72 tackles, including 16 for loss.

Peppers was Michigan’s first Heisman Trophy award finalist since running back Chris Perry in 2003. He made the trip to New York in early December with his mother and head coach Jim Harbaugh for the ceremony where he learned he finished fifth in the voting.

Peppers, who was sidelined for the Orange Bowl with an injury, was clocked at 4.46 in the 40-yard dash at the NFL combine in Indianapolis last month, the fastest among linebackers.

Peppers’ time at the combine would be faster than a number of strong safeties, including Ha Ha Clinton-Dix, who was picked in the first round of the 2014 draft by the Packers.

Peppers’ draft status took a hit earlier this week news came out that he had a diluted urine sample for his drug screening at the NFL combine. The diluted sample is treated like a positive test.

Charlton’s play his senior year put him on the radar among first-round prospects, getting in on a team-high 9.5 sacks while earning first-team All-Big Ten honors after starting just three games in 2015 and one his sophomore season.

Charlton, a 6-6, 277-pound defensive end, has outstanding size and a great blend of power and quickness to make an impact in the NFL.

“When you come from a big school, especially a school like Michigan with Coach (Jim) Harbaugh, you get coached by some of the best coaches and the competition is the best that you can ask for,” Charlton said in a conference call after he was selected. “The NFL’s a jump, but when you’re going against the best guys in college you kind of know what it feels like to go against the best in the NFL.”

Cornerback Jourdan Lewis is also expected to be picked in the opening two rounds.

Lewis, from Detroit Cass Tech, could be considered a bit undersized at 5-10 and 188 pounds, but has outstanding size and is a great competitor to more than make up for his lack of size, showing his athleticism with a one-handed interception in a victory over Wisconsin.

Lewis put himself in the spotlight his junior year, starting 13 games and breaking up 20 passes. He earned first-team All-American honors this past fall and was Big Ten Defensive Back of the Year after getting in on 25 tackles and breaking up nine passes.

In March, Lewis was charged with misdemeanor domestic violence, which could also play a role in where and when he gets picked in the three-day draft.

Lewis should be among several Michigan players picked on Day 2 Friday night in Rounds 2 and 3.