It is a two-man race between Wilton Speight and John O’Korn and both are feeling confident in how they’ve prepared.

Ann Arbor — It is a two-man quarterback race between Wilton Speight and John O’Korn, coach Jim Harbaugh said last week as preseason camp approached the halfway point, and both are feeling confident in how they’ve prepared.

Speight was the starter last season, and O’Korn, a former starter at Houston as a freshman, was the backup.

Harbaugh has not yet told them when he will make a decision, O’Korn said. Speight was asked Wednesday if he expects to be the starter for the season opener against Florida.

“I feel good about the work I’ve put in,” said Speight, noticeably leaner after dropping 23 pounds in the offseason. “I’m sure all the quarterbacks do. Just take it day by day.”

O’Korn was asked if he’s on track to start.

“I’m ready if my number is called,” he said. “I’m sure Wilton will say the same thing. But we’ve both been competing our butts off, Brandon (Peters), too, and Dylan (McCaffrey). Everybody’s been competing really hard.

“It’s been a great camp. Offense has been looking really good. We’re going to be ready to roll. Right now we’re just focused on us. We haven’t even looked at a single play of Florida yet. There’s a lot of rumblings outside of our building about them. We’ve been focused here on ourselves and that’s what it’s going to take to win those three more games we couldn’t win last year.”

Speight led the Wolverines to a 10-3 record last year. He missed the start in the final regular-season home game against Indiana because of a shoulder injury suffered the week before at Iowa, and O’Korn started. While O’Korn said he would like some throws back from that game, he felt he managed it well and did not turn over the ball while helping the team get the win.

Along with the other quarterbacks, Speight has worked hard in the offseason developing timing with the freshmen receivers, in particular, and the returning receivers like Eddie McDoom, Kekoa Crawford, Grant Perry and Moe Ways.

He also dropped those 23 pounds.

“I feel a lot quicker coming from under center being able to finesse around the pocket and maybe get more than two or three yards like I did last year.”

The addition of Pep Hamilton, who came to Michigan from the NFL’s Cleveland Browns to take over as pass-game coordinator, has, both quarterbacks said, helped them immensely.

During the team’s spring trip to Rome, Speight and O’Korn used that time to better get to know Hamilton.

“It’s coming along well,” Speight said of his relationship with Hamilton. “It’s business. The personal relationship came along this offseason but at the end of the day at this level you don’t really have to be best friends. You go out there, you win games, you complete passes and you move on. That’s the mindset you have to have in this profession.” 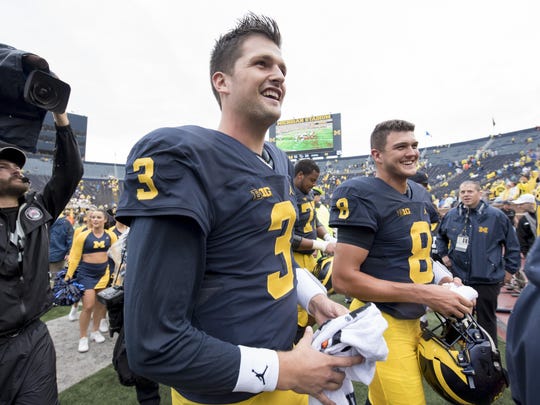 O’Korn said Hamilton has reshaped his game, starting from rebuilding his confidence. After starting as a freshman at Houston, O’Korn, under a new offensive coordinator, was benched after a few games his sophomore year. He transferred to Michigan, sat out a season and competed for the job last year with Speight and Shane Morris.

“He’s been a godsend for me,” O’Korn said of Hamilton. “I think he’s helped me evolve into the player, the leader and person I always knew I could be. He’s helped me get my confidence back. I feel I’m playing at the highest level I ever have right now. That’s what it’s going to take to lead this team to the things we want to do this year.”

Getting benched after hearing your name bandied about among the top quarterbacks in the country rattled O’Korn’s psyche.

“You go through some things, you get benched,” he said. “You’re at the top of the college football landscape, you’re getting talked about for a Heisman Trophy and Davey O’Brien and a few weeks later you’re benched. It’s part of being human.

“I felt at times I was the scapegoat at Houston for a lot of things that were going on within the program. That’ll shake an 18-year-old kid. It’s something you’ve got to go through and learn from to get to where you’re at now.”

Hamilton has added more to the plates of the quarterbacks.

“The biggest thing I would say, we have a lot more responsibility with protections this year,” O’Korn said. “There were times last year we really didn’t know what was going on up front. A lot of times you’d see me scrambling when I didn’t need to. That was maybe my big flaw that everybody liked to point out last year. I’ve really found confidence in just sitting in the pocket and knowing what’s going on up front.”

Speight’s confidence has never really wavered but he knows there’s always negative chatter, especially after the spring game. Redshirt freshman Brandon Peters looked smoother in the game, and Speight later admitted he was not sharp.

As a starter last season he learned how to tune out the negative, and that has stuck with him.

“It’s really the tunnel vision, the race horse that wears the blinders,” Speight said. “That’s because the owner or jockey doesn’t want the horse to be distracted. That’s the motto I’ve always had at this position. You can’t worry about what’s going on to the right or left of you. A good way to do that is to just block it out, and that’s what I’ve done. It’s worked for me in the past, and I think it will work for me in the future.”

He said it’s even easier to do that now.

“The older and wiser I get, I guess the easier it is to not worry about outside opinions,” Speight said. “Just worry about the opinions of my teammates, my coaches and myself.”

O’Korn also has learned how to compete and not take things personally.

“I think last year it was the first time for both of us together,” O’Korn said, referring to Speight. “There were honestly times we maybe weren’t completely honest with each other. We say we’re the best of friends but there were times where maybe that wasn’t the case.

“This year I can honestly say going through that last year really, for me personally — I can’t speak for Wilton — but having to swallow my pride and really support him and get behind him throughout the year brought us a lot closer.”