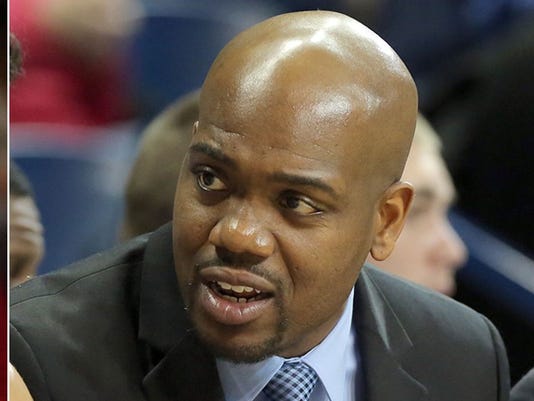 DeAndre Haynes recalled a meeting with John Beilein where he ordered spicy salsa unbeknownst to the coach.(Photo: Michigan Athletics)

When DeAndre Haynes finally met with Michigan coach John Beilein for a face-to-face interview earlier this summer, it got off to a horrible start.

During a radio interview on WTKA’s “Michigan Insider” this week, Haynes recounted the events leading up to his sit-down meeting with Beilein last month and how the opportunity to become one of Michigan’s newly hired assistant coaches unfolded.

It all started when Haynes, a Detroit native, came highly recommended as a candidate from former Michigan assistants Bacari Alexander (Detroit Mercy) and LaVall Jordan (Butler) as well as current assistant Saddi Washington.

“I knew the Michigan job had opened up and guys said, ‘I brought your name up to coach and he was asking me questions about you and he's thinking about interviewing you,’” Haynes said. “So I'm sitting there and my heart is racing. I call my wife and tell her, 'I think it's happening.'

“We were all excited about it and then I finally got the call and told everybody to be quiet. My kids were going crazy. He actually gave me a call and said, ‘DeAndre, I'd love to meet with you sometime coming up.’”

It just so happened that Haynes, who had accepted an assistant coaching position at Illinois State in May, and Beilein were both going to be in Atlanta recruiting. Beilein threw out the idea of doing an interview on the road and Haynes obliged.

“I got myself together. I had to pat my bald head down because I was sweating a little bit,” Haynes said. “We end up meeting and he takes me to this restaurant. And at first, I had got some salsa for my chips.”

Unbeknownst to Beilein, he asked Haynes to order him the same thing not knowing it was spicy salsa.

Fortunately for Haynes, that was the only hiccup and the rest of the interview went smoothly as the two talked about what he brings to the table and his recruiting philosophy.

“I think Coach Beilein is a great guy. He's about all the right things,” said Haynes, a former standout point guard at Detroit Southwestern and four-year starter at Kent State. “He told me he's going to trust in me to be ready to work with our guards, which is one of my specialties and I love to do. I have a passion for working with guards, doing the skill development, which they had a lot of success with doing that here.

“So that's one of the things I really hang my hat on. I get in the gym with the guys and sweat with them on the floor.”

Haynes added he’s familiar with several Michigan players from the recruiting trail during his previous stops at Toledo and Kent State, including Xavier Simpson, Jaaron Simmons, Eli Brooks and Jordan Poole, and has extensive recruiting ties in Detroit, Chicago, Indiana and Ohio.

Yet being the one selected for the Michigan position out of all the others who were being recruited is humbling for Haynes.

“This is a dream job for me,” he said. “I took my kids to Disney not too long ago but every time I pull up to this place, it’s Disney to me. It’s just a magical place.”