In this edition of the College Football Show, Bob Wojnowski and John Niyo look at what Michigan and Michigan State did right and wrong in their weekend wins. They are joined by Matt Charboneau and Angelique S. Chengelis. 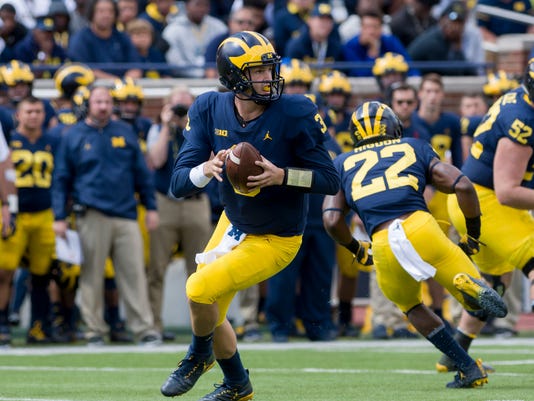 Angelique S. Chengelis: Michigan defensive coordinator Don Brown has been worked up about playing Air Force since after the spring game at Michigan Stadium — in April. During the three practices in Rome, plus an additional spring practice before they left home, Brown said they worked on defending the Falcons’ triple option. No defense really loves this test but here it is. This will also be an opportunity for quarterback Wilton Speight to find his footing in the pass game. Michigan 27-17

Matt Charboneau: It’s never simple preparing to face Air Force and its triple-option offense and Michigan will get a chance to prove its defense is truly the real deal. The offense, however, has been the bigger problem for the Wolverines, though they should be able to take advantage of an Air Force defense that is playing 10 new starters from a season ago. Michigan 34-17

John Niyo: There will be big plays available down the field for Michigan, and some play-action success sure would help Wilton Speight shake off a slow start. The Wolverines' defense will have its hands full, but they started prepping for this in spring practice. Michigan 41-17

Bob Wojnowski: Similar to Michigan, Air Force lost a lot of seniors. Not similar to Michigan (or almost anyone), the Falcons’ triple-option offense likes to run run run. Air Force’s goal will be to use the Wolverines’ speed, aggressiveness and youth against them. Defensive coordinator Don Brown has been working on this game for a while, and his players’ discipline will be tested. Air Force has won seven in a row and will pose a challenge, but defense wins it. Michigan 31-13