UMs Ty Isaac (32) grimaces as he realizes he was pushed out of bounds on this run that appeared to be a touchdown early in the first quarter. Todd McInturf, Detroit News
Fullscreen

Michigan's Rashan Gary (3) holds on as he tackles Air Force's Arion Worthman (2) at the line of scrimmage in the second quarter. Todd McInturf, Detroit News
Fullscreen

Kevin Shaler, retired from the U.S. Navy, of Boyne City, claps as members of the U.S. Air Force are recognized. Todd McInturf, The Detroit News
Fullscreen

Air Force head coach Troy Calhoun is unhappy as his team is penalized for holding near the end of the third quarter. Todd McInturf, The Detroit News
Fullscreen

Michidgan's Ty Isaac (32) is pursured by Air Forces Marquis Griffin (2) on a long run that appeared to be a touchdown at the end of the third quarter, but the run was called back due to holding on Michigan. Todd McInturf, Detroit News
Fullscreen 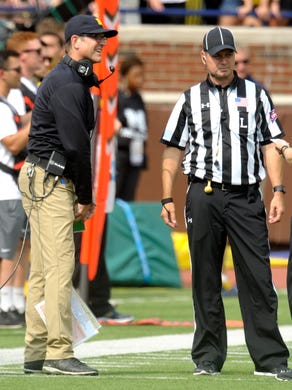 UM head coach Jim Harbaugh, left, talks to referees after he calls his team's last timeout due to too many men on the field in the fourth quarter. Todd McInturf, Detroit News
Fullscreen 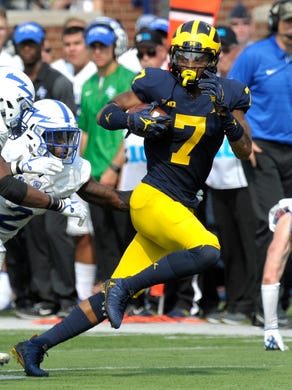 Air Force's Jack Flor (50) tackles Michigan's Chris Evans (12) on this first down as his helmet comes off in the fourth quarter. Todd McInturf, Detroit News
Fullscreen

Michigan's Karan Hidgon (22) points at the crowd as he crosses the goal line for a touchdown near the end of the game. Todd McInturf, Detroit News
Fullscreen

UM's Patrick Kugler (57) looks back while walking to the locker room as fans are overjoyed about UM's win. Todd McInturf/Detroit News
Fullscreen

Air Force's Jack Flor (50) tackles Michigan's Chris Evans (12) on this first down as his helmet comes off in the fourth quarter.(Photo: Todd McInturf, Detroit News)

Here are some of the key takeaways from Michigan’s victory over Air Force:

■ Wild thing: Quinn Nordin is more than just a cool haircut. He has been so productive he’s tied for the lead nationally in field goals per game (3.67) and has been responsible for 42 points so far this year. He made kicks from 26, 29, 35, 36 and 49 yards against Air Force, tying a record for most field goals in a game by a Michigan kicker. He is 11 of 13 on field-goal attempts this season. Remy Hamilton holds Michigan’s record for most field goals in a season with 25 in 1994.

■ Catch me if you can: Freshman receiver Donovan Peoples-Jones electrified Michigan Stadium on his 79-yard punt return for a touchdown in the third quarter of the Wolverines’ victory. It was the first punt return for a touchdown since Jabrill Peppers’ 54-yard return on Sept. 17, 2016. Peoples-Jones returned two punts for 104 yards against Air Force, and he recorded his first college receiving yards — 52 on two catches, including a 37-yarder on his first reception. “Feel like great things will happen for Donovan Peoples-Jones,” Michigan coach Jim Harbaugh said after the game.

More: Michigan drops one spot to No. 8 in both polls

■ No friend of the bench: Tailback Chris Evans fumbled on his third carry of the game after gaining nine yards. That gave Air Force the ball at Michigan’s 44 and 12 plays later the Falcons tied the game with a field goal. Evans was the starter in the season opener, and lost that job to Ty Isaac, who started the next two games. Karan Higdon was the second-leading back in the game with 12 carries for 64 yards, including the lone offensive score on a 36-yard run with 1:02 left. Evans returned on that final scoring drive and had three carries for 12 yards. He finished with 30 rushing yards on six carries.

■ Tone-setting linebacker: Perhaps Michigan could use linebacker Devin Bush to help the offense break through its red-zone issues. OK, so that’s not going to happen, and Bush will be left to do what he’s doing on defense. He had 11 tackles against Air Force, tied for the team lead with Mike McCray, and a sack. Bush is a disruptor, a lightning strike when he hits an opposing player, which he has done for a team-leading 25 tackles, including 16 solo. He has been credited for 4½ tackles for loss this season.

■ Don’t sleep on Purdue: Michigan learned its Big Ten opener at Purdue might be a tad more interesting than anyone thought heading into the season. The Boilermakers are coming off a 35-3 upset of Missouri and have caught the attention of Big Ten observers. Meanwhile, Michigan dropped a spot in the rankings that, as we all know, mean zilch right now, except maybe to a team like Purdue that has another upset on its mind.