Michigan vs. Purdue: View from the other side

Michigan vs. Purdue: View from the other side 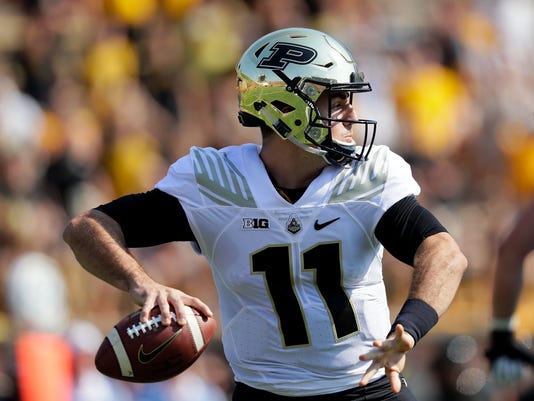 VIEW FROM THE OTHER SIDE

Question: Jim Harbaugh thinks first-year Purdue coach Jeff Brohm is the early favorite for Big Ten Coach of the Year. Are you at all surprised by the early success he has had with the Boilermakers?

Answer: “Shocked” may be too strong of a word, but absolutely surprised not just that Purdue has won two of its first three games but the way it has competed in them. It has won two games in a row for the first time since 2012. Going into the season, I picked four victories because there were considerable questions on offense (line, receiver) and there isn’t much depth anywhere. Plus, the schedule presented its challenges. But if these first three games have proven anything, it’s coaching matters. Brohm, who calls the plays on offense, and defensive play caller Nick Holt have done something that sounds logical — putting players in positions where they can utilize their strengths — but hasn’t been something that’s been done at Purdue recently. And that strategy has produced results. Brohm is using misdirection and motions and shifts, getting his quarterback on the move when necessary, using play-action and attacking defense’s weaknesses to overcome some physical and talent deficiencies. Holt is putting his most talented players (linebackers) in positions to make plays by allowing them to get downhill and become playmakers. It all just makes sense, and, so far, it’s worked. The whole “buy in” aspect sometimes can be hard to quantify, but players are believing in the systems, and it’s meant they’re playing hard every snap. That’s a change that's mattered. For a team that is not accustomed to winning, it's a significant step.

Q. Seems like David Blough will be the starting quarterback going forward. What has impressed you so far regarding his play? But also, there's Elijah Sindelar — how will the Boilermakers use him?

A. Blough sometimes can get antsy in the pocket and can be forced into bad decisions when he's under pressure. That showed up in Week 1 against Louisville when he threw a pick-six and followed the next series with a heave into double coverage that was intercepted. They were not decisions that should have been made by a junior captain who'd started 20 games. So after (another) an extensive conversation with Jeff Brohm leading into the second game about the mentality needed to play quarterback and some footwork tweaks, something seemed to click for Blough. He has been turnover-free the last two games and has done it by making better decisions. In Week 2, he said his best pass was a throwaway instead of trying to force a pass in the red zone. He's an accurate passer, so eliminating mental mistakes that lead to physical errors means he's been able to be incredibly efficient. He's completing about 76 percent of his passes on the season. The test this week is how he'll stand up if Michigan gets pressure. He can't revert back to "old" Blough or Purdue probably won't stand a chance. Brohm is insistent he'll continue to play sophomore Elijah Sindelar, who is different from Blough in that he's a 6-4, 230-pounder with an NFL arm and isn't as mobile as the 6-foot Blough. If Sindelar plays, Purdue will take shots downfield. Purdue tries to do that with Blough, too, but it's a guarantee with Sindelar.

Q. Michigan's defense has been fairly stifling these first three games, but Purdue has put up some points and will provide the Wolverines' young secondary with their first big test. What's the key for Purdue having success against this D?

A. If Purdue can find a way to run the football consistently, that'd be huge. I'm not sure it has the talent to do it against Michigan's front seven. So, to me, the matchup to watch is Purdue's largely inexperienced receivers who haven't proven they can get separation against the press man coverage Michigan is expected to play. The Boilermaker receivers haven't done a great job winning one-on-one matchups, so that probably means Brohm is going to try to have to scheme to get players open — look for mesh routes, stacking on the line, short motion, etc. Can he do it? Purdue would like to avoid Blough on his back, so that'd seem to mean trying to get the ball out of his hands quickly. But that can be tough to do against man coverage. So Brohm is going to have to find an answer. Perhaps it's tempo. Perhaps it's getting Blough on the move in the pocket. Perhaps it's a variety of trick plays, of which Purdue is good for at least one a game. Though Purdue has put up points in its first three games, it hasn't done it against this kind of a defense: One with a legitimate pass rush that plays man coverage behind it.

Q. Purdue's defense clearly has been no slouch. What aspect of the defense do you think Michigan will struggle with most?

A. Purdue's top emphasis is stopping the run, and it has done so pretty well this season for a number of reasons: Interior linemen who are strong, quick and explosive and have held up at the point of attack and linebackers who fly to the football and fill run fits quickly and physically. Missouri had a 1,000-yard rusher that couldn't manage anything against the Boilermakers last week. Mizzou's O-line probably doesn't compare with Michigan's, though, so it'll be interesting to see that matchup. If Michigan is going to win, it's going to have to control the line. And Purdue plays a lot of one-high safety looks specifically so it can bring an extra player in the box to stop the run. It's strength vs. strength here.

Q. What's the level of excitement right now for Purdue heading into this homecoming game against Michigan and in the big picture, what's a reasonable expectation for the Boilermakers this season?

A. Purdue hasn't played in front of a sold-out Ross-Ade Stadium since Coach Joe Tiller's final home game, and that was in 2008. This game is expected to sell out, though it may take up until game time to do it. It's very much a fair-weather fan base, so that probably tells you all you need to know about how the community is feeling about this program right now. In terms of big picture, obviously, this game could go a long way to spurring a remarkable, shocking season if Purdue were to pull an upset. But a loss certainly wouldn't derail the season. Most consider this a rebuilding year, and that's still the case as Brohm works to implement not only his offensive system — this isn't his ideal passing attack — and instilling culture. The fact Purdue has created some buzz and gained some national attention is a bonus. It's likely Purdue will come back to earth at some point, but for now, simply having fans care again is a victory.

■ David Blough, QB: The quarterback made his first start of the season last week against Missouri and was 22-of-28 for 187 yards and a touchdown. He was 15-of-17 for 147 yards in the first half and also had a rushing score. For the season Blough is 51-of-67 for 597 yards, six touchdowns and two interceptions. Elijah Sindelar also will see the field at quarterback. He entered the Missouri game midway through the second quarter and led Purdue to a touchdown on his first drive. He was 4-of-6 for 85 yards and a touchdown and also had an interception.

■ Tario Fuller, RB: Fuller made his first collegiate start this season and has started all three games at running back. In the Ohio game, he had 16 carries for 142 yards and a touchdown, the first of his career. That marked the first time he rushed for 100 yards or more in a game. So far this season he has 43 carries for 261 yards and two touchdowns. He’s averaging 87 yards a game.

■ Jackson Anthrop, WR: The redshirt freshman receiver had two touchdown catches in the season opener against Louisville to become the first freshman in school history with multiple receiving TDs in a season opener. Anthrop has 17 catches for 157 yards and four touchdowns. He’s averaging 9.2 yards a reception.

■ Points and more points: The Boilermakers scored 107 points in their first three games under Jeff Brohm, who is in his first season as Purdue’s coach. That total ranks as the fourth-most by a Purdue team under a first-year coach. The top three: 180 points in 1893 (David Balliet), 134 points in 1891 (Knowlton Ames) and, most recently,109 points in 2009 (Danny Hope).

■ Facing the ranked: No. 8 Michigan is the second ranked opponent the Boilermakers will play this season. The Boilermakers opened with then-No. 16 Louisville. Purdue is 2-9-1 all-time against teams ranked eighth in the AP Poll. The last win over the No. 8 team in the country came Sept. 8, 1984 when the Boilermakers beat Notre Dame 23-21 in Indianapolis.

■ Early meeting:  Purdue and Michigan are playing for the 59th time in series history. The Boilermakers are 14-44 all-time against the Wolverines, including 9-16 at home. Remarkably, this is the game is the earliest in series history and the first time the teams are meeting in September.