Senior guard was on fire, scoring 39 as well as the winning layup in Houston’s first-round win over San Diego State.

Detroit News writers James Hawkins and John Niyo break down Michigan's 61-47 win on Thursday in the first round of the NCAA Tournament.

It’s a burning question to which Michigan will have to come up with an answer after Gray put on an offensive show and stepped into the NCAA Tournament spotlight at Intrust Bank Arena before the third-seeded Wolverines took the floor Thursday night.

Gray poured in a career-high 39 points and scored the winning layup with 1.1 seconds left to power sixth-seeded Houston to a 67-65 first-round victory over No. 11 seed San Diego State.

And when Houston (27-7) and Michigan (29-7) square off at 9:40 p.m. Saturday for a spot in the West Region semifinals in Los Angeles, preventing a repeat performance will certainly be the first, second and third priority for the Wolverines.

“I think with social media and obviously being in the gym our players saw it,” said Michigan assistant coach Luke Yaklich, who serves as the team’s de facto defensive coordinator. “Not that we didn't have our full attention before but when a kid does that, our guys obviously have eyes wide open toward that tremendous performance.

Gray finished 12-for-25 from the field, including 4-for-6 from 3-point range, and was 11-for-15 from the free-throw line. The rest of Houston was a combined 10-for-34 as the Cougars saw their double-digit lead slip away in the second half.

That was until Gray came to the rescue and carried Houston down the stretch, scoring 21 of the team’s final 22 points, including 14 in a row at one point. But no shots were bigger than his 3-pointer and last-second layup in the final minute of a wild finish that gave Houston its first NCAA Tournament win since 1984.

It was just the latest dazzling outing for Gray, who has been on an absolute tear the past month. Over the last eight games, he has scored at least 30 points four times, and is averaging 25.5 points and five assists while shooting 47.8 percent from the field (40.8 percent on 3-pointers).

“He's a great player, a great point guard. He has a style like a lot of good point guards in the (Big Ten),” Michigan sophomore guard Zavier Simpson said. “We just want to try to contain him, try to do what we can to stop him. Anyone scoring 39 points at this time of the year it's important that we know where he is at all times. He can shoot, he can drive. We just want to try and prevent that from happening.

“I'm excited. I feel like it'll be a good matchup.”

Michigan coach John Beilein said Gray reminds him of Purdue guard Carsen Edwards, an All-Big Ten first team selection, due to his ability to see the floor, stop on a dime and pull up, get into the lane and create plays, and score from all three levels.

The bad news with the comparison is that Edwards racked up 32 points and shot 47.8 percent (11-for-23) in two regular-season victories before Michigan found a solution and held him to 12 points on 4-for-16 shooting in the third meeting in the Big Ten tournament.

“It's going to be difficult. We do have guys that can defend individually, but this is a whole new thing right now,” Beilein said. “We weren't able to guard Carson Edwards the first two times we played him. We were able to the third time. We have to do more like we did the third time tomorrow or we won't be playing anymore.”

Beilein said Houston hasn’t been a one-man show all season like it was Thursday night. Gray is surrounded by shooters like guards Corey Davis Jr. and Armoni Brooks, who are each shooting above 42 percent from 3-point range and have made at least 82 3-pointers this season.

But in order for Michigan to push past Houston and return to the Sweet 16 for the second straight season, it all starts with finding a way to slow down Gray.

“For us, it's a team thing,” Yaklich said. “Zavier obviously is at the head of our defense on most possessions and he takes pride in it, but our whole group takes pride in it. It's going to take a team effort to stop a player like (Gray) because he's dynamic and he has great weapons around him.”

Next up: Winner advances to Sweet 16 in Los Angeles 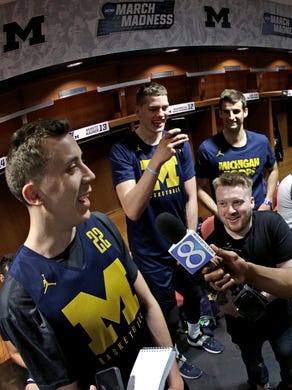 Michigan's Muhammad-Ali Abdur-Rahkman (12) interviews Duncan Robinson (22) in the locker room before practice on Friday. Michigan plays Houston in the second round of the NCAA Tournament on Saturday. Charlie Riedel, AP
Fullscreen