Nothing 'blah, blah, blah' about how UM's Evans wants to be No. 1

Nothing 'blah, blah, blah' about how UM's Evans wants to be No. 1 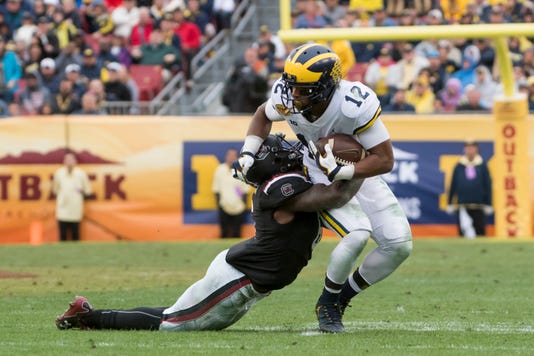 Ann Arbor – It is quite possible the Michigan players have a tailor-made script to use when confronted with the most-asked question this camp: “How good is Shea Patterson?”

Patterson transferred from Ole Miss last December and is competing for the starting quarterback job.

Most of the Wolverines have responded with standard praise and an additional comment: “He can extend plays.” But Chris Evans, competing with Karan Higdon to be the starting running back, set the bar high this week when he was asked about Patterson.

It is not all blah, blah, blah with Evans and Higdon, though.

“Chris and Karan are both starting running backs,” Harbaugh said shortly after camp began. “It’s a 1-1 punch. And not many teams have that.

"They're a great duo. The best thing about both of them is just the consistency day in and day out. They both bring it in terms of meetings, in terms of the lifts and practice. Their actions are truly in line with the goals that they have for themselves, the goals that we have as a team. That consistency of an approach is pretty special and all the other guys feed off that."

Evans said he and Higdon respect and encourage each other.

“We just approach it every day just competing,” Evans said. “If we compete with each other, then that will make us both work harder. If we go in thinking we're the No. 1 guy, then we'll start slacking a little bit. We're trying to fight every day to take over.

“It’s like a quiet competition. We don’t say much to each other. We pump each other up and motivate each other, but when it comes down to it, we’re thinking, ‘I’ve got to push this guy.’” 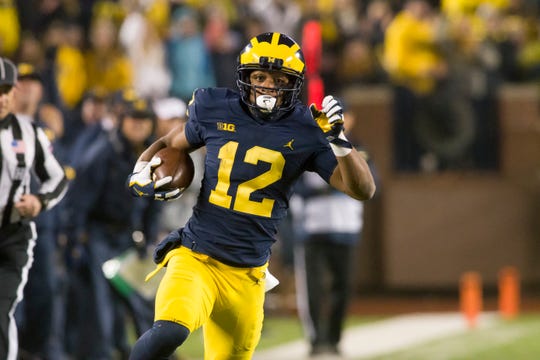 Harbaugh has a new approach in running backs meetings where he has a back run the meeting and then offer critiques of the other backs.

Evans was in that role earlier this week and he critiqued all of Higdon’s practice clips. Higdon has done the same with Evans’ clips.

“Just us pushing each other to see what we see and see how we see it, ball security and all that, just to help each other out,” Evans said of the critiques.

He wouldn’t share his insights into Higdon’s game but said both share a similar goal of getting more yards at the end of their runs and, of course, both are concerned about ball security.

"I don't want to put his business out there,” Evans said. “Just finishing out the play, that’s a big one. And he finishes, but the extra five yards to finish a little more after the play.”

Both have also focused on improving their pass-blocking. When they find spare time between practice periods, they spend additional time working on that technique.

“That’s one of our key factors every day,” he said. “You can run, you can catch, but pass pro will take you longer and get you more reps on the field.”

Several of the offensive players this week said the offense has been tweaked, presumably to take advantage of Patterson’s skillset.

“It’s less downhill running game,” Evans said. “It’s more spread out a little bit for the quarterbacks. That kind of marries to my game what I did in high school.”

Evans has sung the praises of new offensive line coach Ed Warinner and the way he has simplified things for the offensive lineman. He also said the entire offensive staff has altered its approach in a positive way.

“The dynamic has changed a lot,” Evans said. “I feel more of a unit. They’re kind of like player-coaches. They ask us what we like and ask us how we feel about this and feel about that. They want our best interests. They’re not telling us, ‘Hey, that’s what you’re going to do – do it right now!’ It’s, ‘How do you feel about this?’ It’s more back and forth.

“When we have offensive meetings we have more of a talk.”